At the heart of school spirit 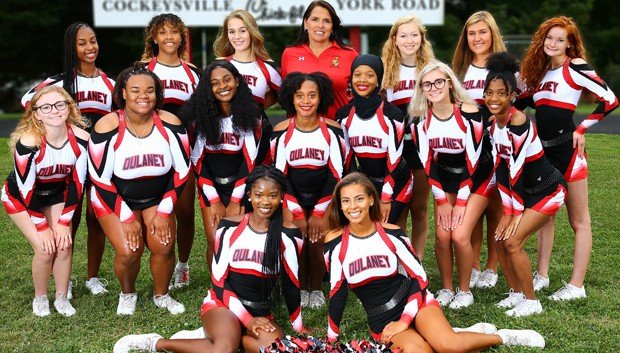 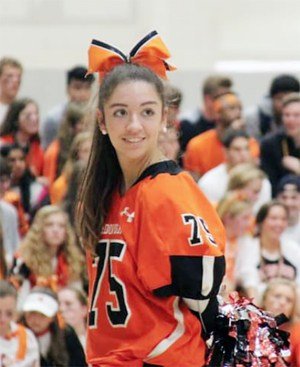 McDonogh captain Summer Faby, made the transition from soccer to cheerleading and relishes her squad’s role in promoting school spirit.

Love cheered through elementary and middle school, but she thought a high school team might be too much like a stereotypical teen movie. Faby, a soccer player, thought she would continue with the sport until she graduated.

However, once Love met City coach Susanne GrayRice and realized the Knights cheerleaders supported each other and were nothing like a movie, she readily joined the team. At McDonogh, Faby played soccer for a couple more years but then wanted to try something new. With a background in dance, she opted for cheerleading.

Both girls were drawn to the team camaraderie and the athletic component as well as the team’s primary role of fostering school spirit which comes to a head around this time of year with Homecoming and rivalry football games.

Love and Faby are now senior team co-captains preparing to drum up plenty of frenzy for their football teams over the next week. City and McDonogh are set to play in two of the biggest annual rivarly games in the Baltimore area on Nov. 2 — City’s 131st meeting with Poly and McDonogh’s 104th meeting with Gilman.

“That’s 100 percent our favorite game to cheer at,” Love said of the City-Poly rivalry held at Morgan State. “This is the epitome of football season. You cannot mess up, because there’s so many people watching you at once. It almost feels like every other game before that is practice for City-Poly… It’s a really big deal.”

Although Love is the first in her family to participate for City, she said some cheerleaders, like football players, carry on legacies of family involvement in the game for dozens of years. That, and one of the largest crowds to attend a high school football game in the Baltimore area, add more pressure and more fun. 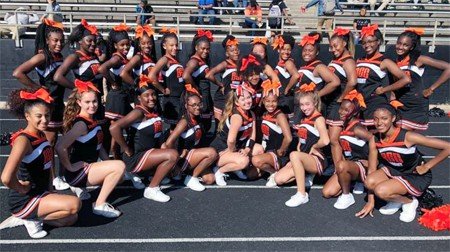 McDonogh has two pep rallies during the week leading up to the Gilman game, Faby said, one for the upper school and one for the lower school.

“We have a huge role in school spirit,” Faby said, “especially at the pep rallies and spirit days at school. The cheerleaders are the ones hyping everyone up and we’re the ones making an effort to get the crowd excited during football games, so I think without the cheerleaders, students would be a lot less energetic at games and at pep rallies.”

When it comes to the rivalry game, the Eagles cheerleaders are in a unique situation. Gilman doesn’t have cheerleaders, so McDonogh’s are in the spotlight the entire game.

“It’s really cool to be out front and we have a lot of students at the game,” Faby said.

Most fans get their first impression of high school cheerleaders from sideline performances at football games, but that’s only the beginning for many squads.

At Dulaney, coach Kim Bettencourt has the most active team in Baltimore County and one of the busiest in the area. They go way beyond football, cheering for every team — girls and boys — at least once per season. For sports such as badminton where they can’t cheer, they sit in the stands and root for the Lions.

For Homecoming, they make posters and goodie bags for the football players. This fall, they decorated the front doors at the homes of football seniors before the game, an idea borrowed from Eastern Tech. The Lions also support Baltimore County Public Schools events at local malls and last month, they cheered finishers at the Race for Our Kids at the Baltimore Zoo.

While Bettencourt, who has coached the Lions since 2003, believes her team should support community events, she emphasizes being a sideline cheerleader.

“The main thing I try to stress to my cheerleaders is that as athletes, they’re also peers to [the other athletes at Dulaney],” Bettencourt said, “so supporting each other really is important, because then they get the respect back when the rest of the athletes see that support. A lot of people look at cheerleaders as, ‘Oh, you’re just putting on a skirt and you’re cheering at games,’ when they’re practicing six days a week like every other sports team and they’re doing stuff at school.”

On the first day of school in September, the cheerleaders arrived at Dulaney at 6:45 a.m. to cheer when the busses arrived.

“We try to break the barrier between sports,” said senior Mya Pena, one of the Lions co-captains. “We try to make sure everyone gets the same amount of attention. If there’s a spirit week, for example like Homecoming, we really work as a team to go all out and charge up school spirit and bring other teams together.”

At all-girls Catholic High, cheerleaders pull double duty. They cheer for the Cubs basketball team, but they also cheer for the football team at Archbishop Curley, an all boys school.

“It’s really no different than it is for any other school,” said senior Makayla George, a Cubs team captain. “We’re out there encouraging them to be the best they can be. It’s really a great opportunity. For Curley to allow us to cheer for them allows us to have a longer season.” 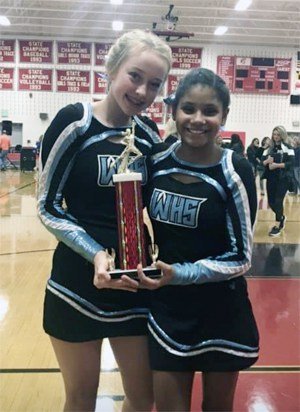 The Westminster cheerleaders put a lot of emphasis on the competitive side of the sport, where they compete for trophies and titles, but the Owls also put great effort into cheering at games, which helps the team develop more well-rounded athletes.

Teams need different routines for competitions than the cheers they perform on the sidelines, so their practices involved two different things — a much more complicated scenario than athletes on other teams face.

Still, like Bettencourt, other coaches are careful not to let the competitive side of the sport completely take over.

“I think it’s really important for them that the school spirit part is their first priority,” said Hereford coach Jen Erline. “I want to make sure we continue with Hereford traditions and make the banners, travel with the football team when we can and wear our uniforms to school on Fridays. We need to focus on that and then focus on the competitive side of it.”

At Westminster, coach Alex Taylor is working with her squad to add a bit more to the Owls games.

“It’s definitely a hard balance for them because we’ve mainly just been a competitive program for so long that we kind of put games on our back burner, but when we start to focus on games, you can see them become more well-rounded athletes and then they get more involved in their school which helps them out on a personal basis outside of athletics too. I think it’s important to focus on both sides of it,” said Taylor, a former Owls cheerleader.

Taylor said her team will soon start working with the school band to develop a dance routine to accompany the Owls fight song.

At City, Love enjoys that she and her teammates are always involved in open houses and preview days for prospective students.

“During preview days, we’re the first faces that they see. They have no clue about high school and how City College is, so we’re smiling and we’re laughing and telling them our experience, but we’re also showing how much we care about our school and how much pride we have in our school.”

Although eighth graders often get a first look at the team during preview days, once tryouts start in August, Love is quick to explain exactly what it means to be a Knights cheerleader.

“This isn’t a movie,” Love said. “This is high school and it’s fun and everything, but we work hard just like everybody else. We’re not here to make enemies. We’re here to support each other and we say that to other athletes as well… We get along well with the other female athletes (at City).”

Even though they have a lot of fun in the process, Love, Faby, Pena and George take seriously their role in building school spirit and enhancing the love they and their classmates feel for their school.

“I love representing my school,” said George, whose Cubs participate in community events and march in parades, including the Mayor’s Christmas Parade and the St. Patrick Parade.

“When I have my uniform on, I feel like I’m an ambassador for my school. It’s important that we wear our uniform with pride while we’re out, that we’re smiling, greeting people and being friendly. Our main goal is to show our school in a positive light anywhere we are performing.”