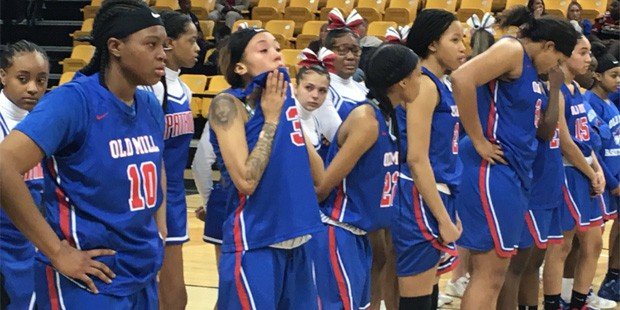 The No. 6 Patriots had no answers for the Prince George’s County squad which claimed the Class 4A state championship with a 57-42 decision at Towson University’s SECU Arena Saturday.

The Patriots were hoping to claim their fifth state title and first since 1993. Flowers, which defeated No. 5 Western in Thursday’s state semifinals, hit the championship jackpot in its first Final Four trip.

The Jaguars (24-2 overall) play a swarming, physical, trapping defense that puts an immense amount of pressure on opponents all over the court, which showed in the way the Springdale squad won the turnover battle, 29-11, and had 14 steals compared to only four for the Patriots (22-5). 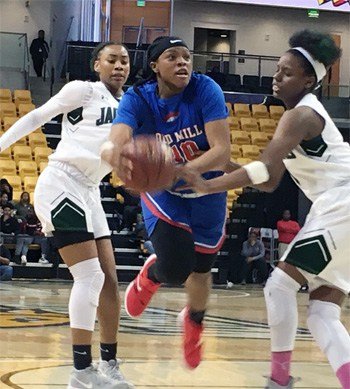 Old Mill junior guard Mikaylah Mallett attempts to drive through Jasmine Hilton and Kaniyah Harris in a 57-42 loss to C.H. Flowers in the Class 4A state final at SECU Arena on Saturday afternoon.

They held Old Mill’s leading scorer Sydney Faulcon in check in the second half after the 6-foot-2 senior center torched them for 16 points before the intermission.

“We made a few adjustments,” Flowers coach Roderick Hairston understated. “We started fronting the post. We put one in from of her and one behind her and tried to make other players beat us. And we were getting up and down the court to make her play both ends to tire her out. Because when she’s on the block, she was almost impossible to stop. She gave us fits.”

Old Mill, which led 11-7 after the first quarter and 24-23 at the half, was brought to a grinding halt in the third quarter when it made only one basket — a stick-back by junior forward Mikayah Mallett — and four free throws.

The problem was that defense, which forced a slew of turnovers leading to extra possessions for the Jaguars, ranked 11th in the District region by the Washington Post.

They scored a whopping 23 points off turnovers (to only five for Old Mill) and, even more importantly, started to wear down the Patriots, who were without Faulcon for a long stretch in the second half after she picked up her fourth foul in the third period.

Faulcon, who will play for Niagara University next season, ended up logging only 19 minutes in her final high school game.

“We were looking for Syd,” said Old Mill junior forward Deja Atkinson. “When she wasn’t in there, we just had to keep moving the ball. It was difficult. ”

By the time Faulcon returned with five minutes and 30 seconds remaining in regulation, the Jaguars were only up, 41-36.

“It was still a close game when she came back,” Old Mill coach Rick Smith said. “And we felt like we could make another run.”

She scored 13 of her game-high 23 points after Faulcon returned to blunt the Old Mill standout’s impact in the late going.

“We felt that we had nothing to lose,” said Harris, who had two blocks and five steals to complement her team-best nine rebounds. “We’ve been working hard since August, so it was either go hard or go home.”

After Atkinson fouled out, four other Patriots, including Faulcon, Mallett, senior guard Briana White and junior guard Jaya Dews, were on the the brink of following suit because they all had been whistled four times.

“We were playing a very aggressive team,” Smith said. “And we were in foul trouble. It’s hard to play that way.”

Mallett, who led the Patriots with 13 points and also grabbed seven boards, said that all the fouls caused her team to back off on defense.

“When you’re already in foul trouble, it makes it harder to, like, go for a steal,” she said.

“We had a good season,” Smith said. “We just fell a little bit short.”

Pictured above: Old Mill players stand dejectedly as they await their runner-up trophy following a 57-42 loss to C.H. Flowers in the Class 4A state girls basketball final at SECU Arena on Saturday afternoon.