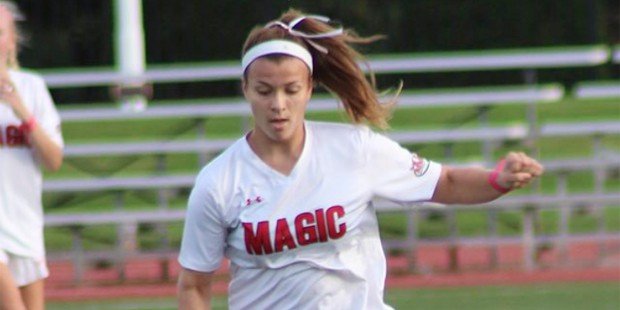 Ada Clare Tempert could — and did — play almost any position during a stellar career at Mercy High School, yet was most effective on power moves toward the goal with a single-mindedness that not only set her apart, it made her an easy choice as VSN’s No. 3 Girls Soccer Striker of the Decade. 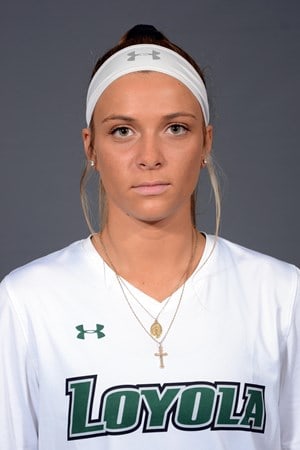 An ACL injury cost Ada Claire Tempert her freshman season at Loyola University in Maryland and the Covid-19 pandemic has kept her off the field this fall, but when her time finally comes, the Greyhounds will have a fiercely competitive star in their lineup.

In addition to her elite athletic ability, an inner drive and outward fire made her an absolute force in the Interscholastic Athletic Association of Maryland (IAAM) A Conference.

“Ever since I was little, I felt like I needed to work hard for everything,” Tempert said, noting she only played at the youth level for Loch Raven Rec. until joining a club team a couple of months before enrolling at Mercy.

Boasting a rare combination of strength and speed, she became the all-time leading scorer for the Magic by contributing 88 goals and 40 assists in four years for coach Doug Pryor and was named the 2018 Gatorade Maryland Girls Soccer Player of the Year.

As a junior, after taking a 50-50 ball away from a McDonogh defender before unleashing a 12-yard rocket for a goal in a 3-2 loss to the eventual A Conference champion Eagles, McDonogh coach Harry Canellakis said that Tempert was “a very dynamic forward up front, which we had a lot of problems dealing with. We were lucky to get out of here with three points (for the win).”

Tempert showed that day, and on many other occasions, the ability to bully her way to the goal when no other avenue was available.

If she was unable to navigate her way around defenders, she was content to just go right through them.

“Any time she touched the ball she could be seconds away from assisting or scoring a goal,” Mercy athletic director Nick Gill said. “She’s one of the most gifted athletes I’ve ever seen, but she also worked hard for everything.”

Because of her burgeoning reputation for finding the net, rivals were quick to bracket the current Loyola Maryland sophomore whenever possible.

“She was the most dangerous player in the state, by far,” Pryor said. “She consistently drew three players (to cover her). And that’s what happened against NDP (Notre Dame Prep, in a 3-0 Blazers’ victory). A ball was played out of the back toward Ada and defenders went to cover her. They weren’t even playing the ball, they were just playing Ada.”

In a similar circumstance but on a bigger stage, with Tempert drawing most of the attention from the defense, the Magic pulled off perhaps the most significant win in program history by upsetting Archbishop Spalding in an A Conference semifinal in 2017.

“Ada had two or three Spalding backs on her the whole game,” Pryor remembered. “She wore out all four of their backs during the game so that they could never go forward.”

Tempert said that “No one expected the little team from Northern Parkway to go down there and beat them.”

Pryor called Tempert, who was selected to play in the sixth annual High School Girls Soccer All-American Game last December in Orlando, Fla., a “special player,” whose positive influence on her teammates was easy to see.

“That’s the kind of impact Ada has,” Pryor said about the 2018 United Soccer Coaches Fall High School Girls All-America selection. “She competes for all 80 minutes. She’s the kind of player who comes along once every 30 years. She almost always gets hit on her way to the goal and the officials don’t usually call anything because she’s just so strong. She just plays through it. She’s a bull.”

As a vocal team leader, her burning passion for the sport was readily apparent by the comments she made to VSN in 2017.

“I play every game I’ve ever played with my whole heart,” Tempert said. “And I know half the girls will, too. And then you have some who are still struggling, and we have to pull them along. We have to do it all together. If we pull each other together, and we have everyone working, we’ll do really well.”

Tempert even branched out to play indoor soccer for the undefeated Magic, one of five varsity sports — indoor and outdoor track and lacrosse were the others — she played as a senior.

After leading the Magic to a 14-5 record and an A Conference semifinal berth while scoring 28 goals and adding 10 assists in the fall of her senior campaign, Tempert took to the indoor game like she had played it her entire career by scoring 19 goals and adding 12 assists in just her first six games for the eventual champs.

Unfortunately for Tempert, an ACL injury forced her collegiate debut with the Greyhounds to be scrapped altogether.

Yet her Mercy legacy should be a shining example for a program on the rise.

“I hope that people see that I was the kid who never just showed up and who worked hard for everything to get where I am now,” she said.