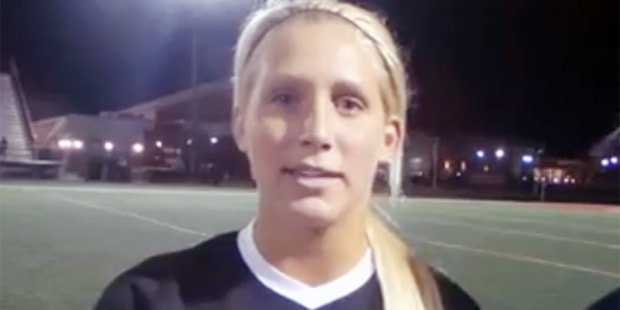 If anyone has the slightest doubt why Bridgette Andrzejewski is being honored as VSN’s No. 1 Girls Soccer Striker of the Decade, check out all of the things she brought to the pitch during what can only be described as a brilliant career at McDonogh School from 2012 to 2015.

For starters, she was not only selected as the Gatorade Maryland State Girls Soccer Player of the Year in 2014, the fleet forward was also named the National Soccer Coaches Association of America High School National Player of the Year for the same season.

The then-junior notched 32 goals and 11 assists for the 15-0 Eagles that season and followed that superior effort with a monster 34-goal, 14-assist senior campaign for coach Harry Canellakis.

After her brilliant high school and college careers at McDonogh and North Carolina, respectively, Bridgette Andrzejewski is now playing professional soccer as rookie with the Houston Dash of the National Women’s Soccer League.

In addition, Andrzejewski was a three-time VSN Player of the Year — the first player in any sport, male or female, to be so honored — who racked up 107 goals and 38 assists in high school before heading to the University of North Carolina to compete for one of the most storied women’s collegiate programs, one that owns a record 21 national championships since 1982 and has been a runner-up five other times.

During her four years in Chapel Hill, the Tar Heels compiled a 69-12-10 mark, appeared in two College Cup finals and one College Cup semifinal and claimed a pair of Atlantic Coast Conference crowns.

As a senior, she scored the only goal of the match on a diving header in the 55th minute to edge eighth-ranked Clemson in a showdown for first place in the Atlantic Coast Conference after slotting the tying goal in a 3-2 victory over the University of Washington at the Husky Invitational in Seattle early that season.

In the 2019 College Cup championship, Andrzejewski played all 110 minutes of regulation and two overtime periods in gut-wrenching 1-0 loss to Stanford.

“Losing (in the College Cup) is not something you’d want to experience,” Andrzejewski said. “But it’s something that when you go through it together with all of your teammates, it brings you closer together.”

Overall, Andrzejewski scored 28 goals and added 21 assists for Carolina during her collegiate career and was the 18th overall pick by the Houston Dash in the 2020 National Women’s Soccer League draft.

After a severely sprained ankle prevented her from playing in the early part of the Dash’s season, she is back on track while preparing to play outside forward and outside back in her rookie season as a professional soccer player.

Her soccer heroics at McDonogh started early and hardly ever slowed down.

Andrzejewski’s high school debut, a 5-4 verdict over highly regarded Our Lady of Good Counsel and eventual 2012 Maryland Gatorade Player of the Year Midge Purce, showed that it wouldn’t take the freshman striker from Lutherville long to get up to speed against varsity competition.

In fact, her opening three-goal salvo that day marred an otherwise undefeated season for the Washington Catholic Athletic Conference champion Falcons and proved that Andrzejewski was already way ahead of the pack in terms of athleticism, soccer IQ and an uncanny ability to ripple the back of the net.

“I think that I’m a good leader on the field, because I never hesitate to take on an opponent 1-vs-1,” she said.

Those assets did come to the forefront during her four years at McDonogh while earning three consecutive Interscholastic Athletic Association of Maryland (IAAM) A Conference titles.

“I hope I set a high standard for every young player coming into the program,” she added. “They could see the path that I took, and that they can do anything they set out to do.”

Former McDonogh teammate — and future college opponent from North Carolina State — Kia Rankin, VSN’s No. 2 Girls Soccer Striker of the Decade said that she received a boost by playing opposite Andrzejewski on the Eagles’ formidable frontline for several years.

“Bridgette was just so dedicated to her craft,” Rankin said. “It helped me so much to be playing next to her in high school. She was a hunter (on the field) and she worked hard for everything. Everything she wanted, she got, and she made me a better player.”

Mercy coach Doug Pryor was also effusive in his praise of Andrzejewski.

“She was the most dynamic player we faced in my 10 years as coach (at Mercy),” he said. “Her senior year, they were winning pretty big late in the second half against us, and she kept begging Harry (Canellakis) to let her back in the game. He finally put her back in at outside back to keep her away from the goal, but she scored two more goals. The score never mattered to Bridgette. She just loved to compete until the end. The fact that my players got to share the field with a future professional was a priceless experience for them.”