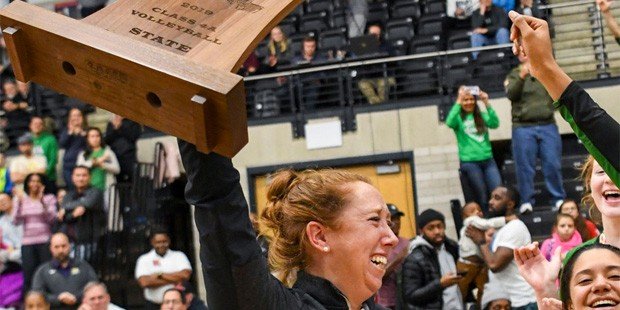 Ashley Yuscavage never dreamed of coaching volleyball when she was young. She didn’t plan to coach after playing at Dickinson College. She just fell into the job when she started teaching at Arundel in 2005.

“I don’t know that I had ever really thought about it before I did it,” she said. “Everyone was like, ‘If you’re teaching, you might as well be coaching,’ so of course, that makes sense. I had no idea that it would take over my entire life.” 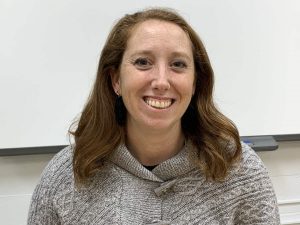 Ashley Yuscavage never aspired to be a volleyball coach, but since 2007 she has been one of the best in the business, earning her honors as VSN’s Volleyball Coach of the Decade.

An English teacher at Arundel, Yuscavage coached JV in 2006 and took over the Arundel varsity team in 2007, beginning a steady climb toward becoming one of the best programs in the state.

Varsity Sports Network’s Volleyball Coach of the Decade, Yuscavage guided Arundel to the state tournament six times in nine years. In 13 years, her record is 185-47.

In 2010, the Wildcats reached the state semifinals for the first time in program history. A year later, they were in the final. Last fall, they won their first state championship, the Class 4A crown, and finished the season 18-1 with the No. 1 ranking.

Varsity Sports Network and The Baltimore Sun named Yuscavage Coach of the Year. It was her second VSN honor in three years and she is the only female coach in VSN history to win a Coach of the Year award twice.

The state title victory was particularly rewarding for Yusavage and the Wildcats not just because it was the first but because it came over their toughest Anne Arundel County rival Broadneck, which had dealt Arundel its only loss of the season. The Wildcats won a back-and-forth match 15-10 in the fifth set.

“It was an incredibly exciting and powerful moment,” Yuscavage said a few weeks afterward. “I’ve said to so many people it was one of the best nights of my life because we’ve worked so hard for so long and to see everything we’ve worked for come together was very special.”

When Yuscavage took over, the Wildcats were about a .500 program in the middle tier of the county league and the Class 4A East region, both dominated by Broadneck through the first decade of the century.

“I don’t know that at the time I had any goals,” Yuscavage, 38, said. “I Ioved volleyball. I was a young teacher. I was like, ‘This seems like it will be cool.’ I guess I didn’t know what I was getting into and obviously since then, my entire philosophy on coaching and who I want to be and what I hope our program will be has changed, but at the time, I had had coaches who had shaped me and I thought I’ll just do what they did and we’ll have fun and hopefully, we’ll win some games.”

By her third year, she said, “I had an idea what we could be and things started to change.”

When she took over the program one or two girls played club volleyball, but Yuscavage urged more girls to play club, keeping them in the game most of the year. She also started coaching club volleyball, at the Bay Area Volleyball Academy, so she could see what other coaches were doing and learn from the veterans.

“Over time, my philosophy shifted to be more like sports are an opportunity to learn more about who we are and who we want to become, so I think I’ve spent a lot more time focusing on the emotional and mental development of our players and of us as a team. I think that’s where a lot of our success comes from, but it also meant that I had to make a lot of changes in the way I coached and sort of the way I ran practices, the expectations I had for the team. My focus was on developing well-rounded athletes and that shifted who we are as a team,” said Yuscavage, who also credited Amanda Hernandez Coursey, her assistant coach from the start.

The Wildcats’ JV coach Allie Orr played for Yuscavage from 2010-2013 and said she knows how to motivate players and inspire them to put the team first. She also said Yuscavage treats each girl as a unique individual, something Orr saw in the tailored approaches she had to communicating with Orr and her twin sister, Brittany, when they were Wildcats.

“You can see it just based on how each team every single year performs, but she’s done a really good job creating the foundation of [Arundel volleyball],” Orr said. “When players walk into the gym at their first tryouts, they kind of automatically have the respect for the team. They’re excited about the team and it’s because Ashley’s made that legacy herself and she’s done it by just being so motivational for every single player and just pushing the team.”

Fiona Gonzalez Medina, a junior libero on last year’s championship team, said she’s most impressed by how hard Yuscavage works with each girl.

“I remember coming in as a freshman and she saw the potential I had and she made me a better player. I feel like she always has a positive impact on all her players. She always pushes us to do better. You leave as a different player if you’re coached by Coach Yuscavage,” said Gonzalez Medina.

As the mother of two young children, Yuscavage has tried hard to make her team a family.

“Some of my favorite memories are not wins but things we did together,” she said. “Seeing them in lip synch battles or some other type of challenge that we have each year, watching the girls laugh and have fun together — moments like that have been really important.”

She said she’s also enjoys watching her daughter Harper interact with the players, whom she said the child “adores,” and knowing that the players return those feelings and have been great role models.

With the COVID-19 pandemic, the Wildcats have not had a season, only six workouts together because Anne Arundel County shut down the fall sports out-of-season practice schedule early. Most of the players have been able to work out with their clubs and some played in a fall league that Yuscavage could not be a part of.

The team, which had high hopes to repeat as state champions, has had virtual meetings each week, but the separation has been hard on them all.

“It’s been horrible,” Yuscavage said. “We expected this would be a great season from a numbers standpoint, but also because of the players we have. Our three seniors (Gonzalez Medina, Brooke Watts and Corinna Baker) were all super involved and we spend so much time together, it’s sad to have missed such a huge part of their high school time, their senior year… I feel like we’ve had to grieve the loss of what we hoped we would have this year and that’s been sad, but we meet virtually every week and I talk to them regularly beyond that.”