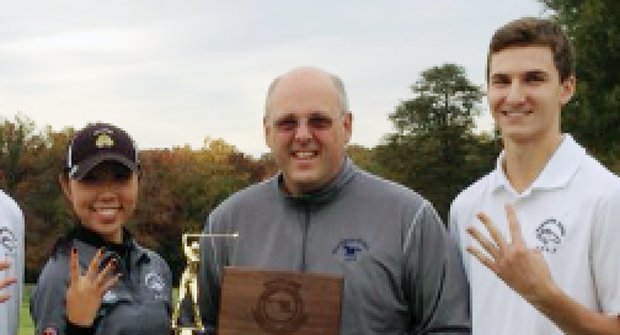 After a near-miss in the race for a state golf championship in 2011, Mark Dubbs made sure his team was on target for the rest of the decade.

With Dubbs’ chip-and-putt practice philosophy girding the Mustangs for the stress of high-level team competition, they reeled off a state-record seven straight Class 1A/2A titles from 2012-2018 while pulling even with Walt Whitman for the most-ever crowns in the sport’s 48-year history.

While that kind of success might suggest that VSN’s Public Schools Golf Coach of the Decade is a golf savant or a dedicated lifelong golfer, a background filled with a variety of interests suggests otherwise.

Dubbs did not play a single stroke of golf at Howard High School or UMBC, where he majored in human geography and economics before becoming a corporate banker.

He eventually became a church youth director until eventually finding his niche as a teacher and coach at Mount Hebron and then River Hill, coaching volleyball for the Vikings and football and track for the Hawks.

For the last 15 years, though, Dubbs has been coaching golf — and doing it very well — at Marriotts Ridge.

If not for a freak hail and rain storm that hampered the Mustangs’ bid for their first crown in 2011, they might have even gotten on a roll earlier than they did.

That weather system soaked Rachel Lee, giving her hypothermia and ruined her chance to win a state title.

Fortunately for her, the Mustangs prevailed the following fall while setting a steppingstone for future success.

Even though senior Chris Yoo wasn’t as fortunate in 2011, he made sure to congratulate Dubbs after the breakthrough.

“In 2011 it was just such a shock to be there (with the lead after the first day),” Dubbs said. “But we just couldn’t break through. But when we did, Chris called me to let me know how happy he was.”

“We don’t play a lot of practice rounds,” he said. “We spend a lot of time chipping and putting. Everybody can hit the ball far these days — it’s the short game that can make the difference. We put the kids in a lot of pressure situations. They’re always competing against each other (in match-like conditions).”

Faith McIlvain, a two-time Maryland Junior Amateur Championship winner (2017-18) and VSN’s No. 2 Girls Golfer of the Decade, said that Dubbs was an able teacher and leader during her career at Marriotts Ridge.

“He taught us a lot of life lessons,” the current Towson University golfer said. “He let us play our game, but if he saw something that needed tweaking, he would help us. He was always very careful with what he taught us.”

McIlvian said that jump to 3A/4A was a bit of a shock, although Dubbs has not let the move impact his program.

“We were well aware of who was there when we moved up,” Dubbs said. “I think the kids were a little intimidated in the beginning by going against much bigger schools, but there’s not much you can do about it.”

Dubbs added that it is “nice to see how golf has evolved in Howard County” during his tenure.

“All of the Howard County courses (public and private) have been very supportive of high school golf,” he said.