10 Years of Excellence: VSN’s No. 5 Pitcher of the Decade 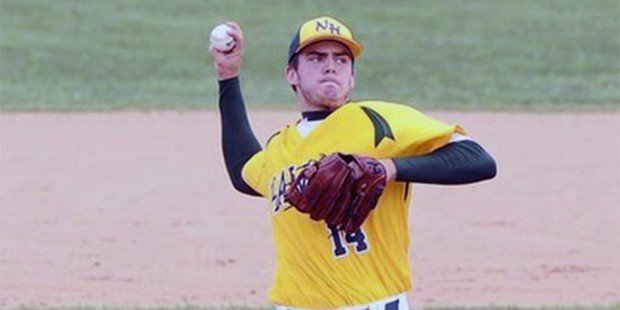 Arguably there has never been a finish to a high school baseball career as the one that North Harford’s Kevin Mooney had in 2012. The VSN Pitcher of the Year experienced the ultimate high and four days later the lowest point, but he came out of it a mature young man with vision. 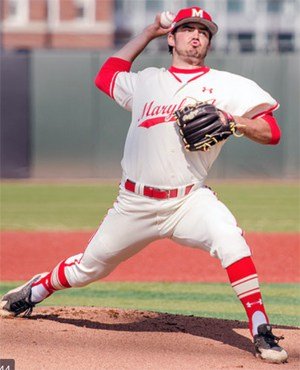 At the University of Maryland, Kevin Mooney converted from a starter to a closer and set the school record for career saves. He was eventually drafted by the Washington National, but his professional career was cut short by a shoulder injury.

Mooney definitely one of the top pitchers in the last decade from 2011 to 2020 is the No. 5 hurler on the VSN 10-year Anniversary Baseball All-Decade Team for his achievements at North Harford High in Pylesville, Md. with 24 career wins, setting closer records at the University of Maryland and time in professional baseball in the Washington Nationals organization, after being drafted in the 15th round in 2015. “I told Kevin as a young kid to remember that it is your head not your arm that will get you places in life,” said Greg Mooney, Kevin’s dad who taught him how to pitch and how to throw the old fashioned 12-6 curve ball that is forever effective, especially when the pitcher throwing it throws hard (low to mid 90’s) with it.

“I showed him the grip (12-6 curve) when he was 11 years old and it gradually got better as he threw it more with age.”

Those two pitches carried Kevin Mooney a long way, but in the end his head with a passion for academics have made him a successful young man.

As the ace of the North Harford Hawks, Mooney, a 6-foot-1and 190-pound right-hander, led his team to back-to-back Class 3A North Region titles and the State Final Four his last two years. The Hawks were knocked out of the 3A State semis in 2011 by LaPlata of Charles County, 2-1 in 15 innings as Mooney turned in a brilliant relief effort going 6.2 scoreless innings with 13 strikeouts, just two walks and he gave up only two hits coming out at the end of the 13th.

The following year, Mooney would lead the Hawks to their first ever State final by crafting a perfect game on Tuesday, May 22, 2012 to blank North Hagerstown, 4-0 in the semis at Joe Cannon Stadium to advance the Hawks to the 3A State Championship game at Ripken Stadium in Aberdeen. With three days rest and within the state pitching rules (14 innings within a 7-day period), Mooney came back that Saturday (May 26) at Ripken with momentum plus.

Unfortunately after reaching the height of confidence due to the masterpiece in the State semis, the Hawks fell in the grand finale, losing to J.M. Bennett of the Eastern Shore by 4-2 despite a two-hitter by Mooney. Three errors damned the Hawks in the final. It was Mooney’s last high school game and his only loss of 2012, as he closed his campaign at 9-1, leaving him 16-2 over his last two years.

“It was an awesome senior year,” said Mooney, who was one to never blame his teammates. “That was a special week we had getting to the final and my teammates made some great plays in the perfect game and the championship game.”

North Harford’s veteran coach Tim Larrimore, who is currently finishing his 31st and final season at the school with nearly 400 wins, coached Mooney from age 11 in youth baseball through high school because the coach’s son was on those teams with Mooney.

“Kevin was a great teammate and was an intense player but never once showed his emotions,” said the coach. “Pressure and nerves never got to Kevin. He was a leader at every level.”

Larrimore was asked what was his “most memorable performance” by Mooney and the coach answered without hesitation, “the perfect game in the 2012 state semifinals.”

This writer covered the perfect game for VSN and it was truly a gem. It was nearly absolute perfection.

Consider this: No batter reached base as Mooney recorded 21 consecutive outs, striking out 13 of the 21 outs, four of the K’s on just 3 pitches, never went to a 3-0 count on any batter, threw two balls to just four batters, threw 58 strikes and 19 balls for a total of 77 pitches. You don’t get much better than that unless you punch out 21 in a row.

“Every time Kevin took the mound, the potential for a no-hitter or perfect game was there,” said Greg Mooney, who Kevin said taught him the mechanics of pitching that led to great success.

Yours truly also was on hand for the 15-inning marathon with LaPlata in 2011 and Mooney wasn’t quite as sharp as in the perfect game a year later but he was darn good. According to my scorebook, he escaped a jam in the seventh when he came in striking out two in a row with men on second and third and a bases loaded threat in the 13th frame. At two points in his stint, Mooney retired eight in a row and shortly thereafter another seven in succession.

Mooney’s 9-1 two-time Baltimore SUN All-Metro senior season featured 114 K’s in 64 innings pitched. He walked only 18, gave up only four earned runs for an 0.44 ERA, yielded 20 hits, had five shutouts, eight complete games while opponents hit only 0.90 against him.

Batting in the middle of the order, Mooney also swung the bat well. He had a .347 batting clip with three dingers, 18 runs scored and 30 RBIs leading the Hawks to an overall 23-3 record and the VSN No. 2 ranking in its 2012 Final poll behind MIAA A Conference champion Calvert Hall.

His career numbers also soared. Mooney set school records for career wins (24), ERA (1.35) and strikeouts (301). The strikeouts rank 6th statewide (public and private) and 4th for just public schools. With the bat, Mooney had a career .353 clip with 9 home runs, 19 two-baggers and 82 RBIs.

Mooney was also an excellent student/athlete boasting a 4.07 GPA on the Honor Roll all four years, was ranked 16 in his senior class of 338.

No wonder the University of Maryland at College Park and then head coach Eric Bakich was interested in him. What a choice the Terps made because Mooney signed a letter of intent and fit right in, both athletically and academically. Mooney began as a starter on the bump for the Terps, but before long he was in a closer’s role and would go on to set records, breaking those of current Toronto Blue Jay closer, Brett Cecil. By his junior year, Mooney was a pro prospect and was drafted on the 15th round by the Washington Nationals.

Academically, Mooney carried a 3.61 GPA and was named to the Dean’s List each fall from 2012 to 2015 and he would eventually graduate with a BS degree in Geographic Information Systems to pursue an occupation in the Tech world. He received a citation from the University Honors College.

Back to the diamond where they play baseball, Bakich, who would leave for Michigan after Kevin’s first year with the Terps, and his coaches asked him if he had ever been a closer. Kevin of course said no, but eagerly went right after his new role. Mooney appeared in 28 games and finished with 9nine saves and a 2.18 ERA in 2013.

His sophomore season, Mooney was 1-2 but tied the Maryland record for saves in a single season with 13. Cecil had set the record in 2006 and owned the record for career saves (22) that Mooney would pass with 33 by posting 11 more with a 2.84 ERA and 47 strikeouts in 38 innings while appearing in 25 games in 2015.

“Setting the saves record was really special,” said Mooney, whose ability to put out fires enabled the Terps to win back-to-back NCAA Regionals in 2014 and 2015. Here again his composure and what his dad and coach Larrimore taught him inspired him.

Mooney had only five saves going into the 2015 NCAA post season. The Terps would win six games in the playoffs and Mooney would ring up a save in each of the victories, striking out the final batter with his knee buckling 12-6 curve ball. Mooney had two of those saves against heavily favored UCLA out on the West Coast in Jackie Robinson Stadium.

John Szesc had replaced Bakich as the Maryland coach and his pitching coach was the accomplished Jim Belanger (no relation to late Orioles shortstop Mark Belanger) and Mooney credited those two for a lot of his success as a closer.

“Coach Belanger stressed the mental side and kind of stayed out of the physical side,” said Mooney. “The mindset he taught was a big help to me and my dad had always emphasized the mechanics of pitching. My dad had a lot of videos that really helped along the way.”

Mooney’s older sister Stephanie was a senior at Maryland when he was starting in 2013 and she was a big help in many ways.

“With Kevin pitching at Maryland, it was close to home (Forest Hill) and became a family thing for my wife, Karen and I and Stephanie,” said Greg Mooney. “We got to see him pitch and that was great.”

After his junior season at College Park, Mooney signed with the Nationals and they assigned him to the Class A Auburn Doubledays in the New York/Penn League. His pro career was short-lived as a mysterious shoulder injury plagued him. In 2016 he went 0-2 and was later released.

“I miss it (pitching), but I gave it my all and am happy with my career and where I am now,” said Mooney, who is 27-years old in the growing Tech business and is engaged to Harley.

Mooney resides in Rockville and his dad’s advice and words, and those of coach Larrimore, ring true in his ears – “It’s your head not your arm.”