10 Years of Excellence: VSN’s No. 5 Girls Lacrosse Midfielder of the Decade

Francesca Whitehurst had only two gears on the lacrosse field — nothing and full speed — according to her high school coach Regan Koffel. Whitehurst spent very little time in “nothing.”

“She’s just pure grit. She goes 110 percent all the time,” Koffel said. “As a midfielder, who has to be at both ends and has to run up and down the field, she’s someone you can rely on to get that job done. She was such a hard worker. Everyday at practice, she’d come out like it was a game, ready to play. Sprints or drills or whatever, she’s doing them full speed. We always joked that there was nothing and there was full speed. She didn’t have that middle gear. She was always just giving her all.” 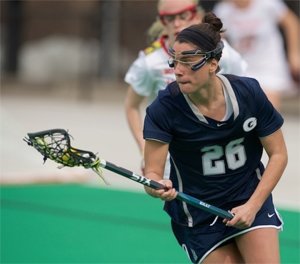 After her brilliant high school career and an summer with the US U19 National Team, Francesca Whitehurst went on to an All-American career at Georgetown University, becoming the first Hoya with 100 career goals and 200 career draw controls.

On the field, full speed was a lot faster for VSN’s No. 5 Girls Lacrosse Midfielder of the Decade than it was for most other players. Whitehurst scored one of the fastest goals on record during her senior year — six seconds from draw control to net.

Opponents just could not slow her down, so she got a lot of great looks at the goal. Her senior year, she scored 71 goals and hit 74 percent of her shots while leading the Reds to the IAAM A Conference final.

“She is the one player I found to be unstoppable,” Maryvale Prep coach Jessica Randisi told The Baltimore Sun in 2015. “She’s faster than everyone in the league and she made a significant difference with her presence.”

Also a soccer and basketball standout at Roland Park, Whitehurst used a combination of speed, quickness, skill and high athletic IQ to be a force all over the field. She finished her Roland Park career with 198 goals and 20 assists as well as a lot of draw controls, including 72 her senior year.

Twice, she led the Reds to the IAAM A Conference final, but her fondest memory comes from the 12-10 tournament semifinal win over Notre Dame Prep her junior year.

“I don’t think we were expected to go to the championship that year,” Whitehurst said, “and we probably had the closest team that we had yet. Winning that game and the excitement we all felt — we all stayed on the field for like 30 minutes celebrating. That was definitely my favorite game.”

In both title games, Roland Park pushed national No. 1 McDonogh before falling — by one goal her senior year — but that couldn’t diminish Whitehurst’s high school lacrosse experience.

“I probably had the best four years. I know that’s cliche, but I’m still so close with some of my best friends that I played with. I have probably eight girls that all were a part of the team and we talk almost every day. Being able to just play with some of your best friends and have so much fun in that kind of environment and to make it to two championships my junior and senior year, it was awesome.”

After her senior year, she was selected to the All-World Team after helping the U.S. win the silver medal at the Under-19 World Championship in Scotland and she went on to become Georgetown’s first All-American in six years in 2019.

Whitehurst said playing for the U19 team was one of the best experiences of her life.

“I still say this to this day —through college and even when I was on the training roster for the senior (U.S. national) team for a period of time — that [from the] U19 experience, I think I learned more than I ever have. At such a young age, it took my game to such a completely different playing field. Those were, hands down, some of the best coaches I’ve ever had and they just pushed me to my limits. I’m grateful for that and it 100 percent prepared me for college,” she said.

At Georgetown, Whitehurst capped her career as an Intercollegiate Women’s Lacrosse Coach’s Association second-team All-American after leading the Hoyas in scoring with 76 points, including 42 goals, as well as draw controls with 82 and caused turnovers with 10.

Twice she was named Big East Midfielder of the Year and finished her career with 105 goals, 69 assists and 218 draw controls. She was the first Hoya with 100 career goals and 200 draw controls.

She played one summer of professional lacrosse right out of college and she now works for Insight Global, a staffing recruiting agency in Baltimore, where she recruits workers mostly for positions within the IT field.

Now that she’s established in her career, Whitehurst hopes to get more into coaching. She previously coached with her former club team, TLC, and also helped with winter sessions at Roland Park. Before COVID-19 struck, she gave private lessons.

“I was coaching the rising juniors, so they were right around that recruiting age and I definitely love that age. I love coaching high schoolers, people who are looking to get recruited, just because having someone right out of college I felt like was beneficial to them and I took a lot of value out of that, so that’s definitely the age group I’d like to stay involved with. I’d love to, at some point, get into the high school level. I’d love to go back to Roland Park or anywhere. That’s my goal.”