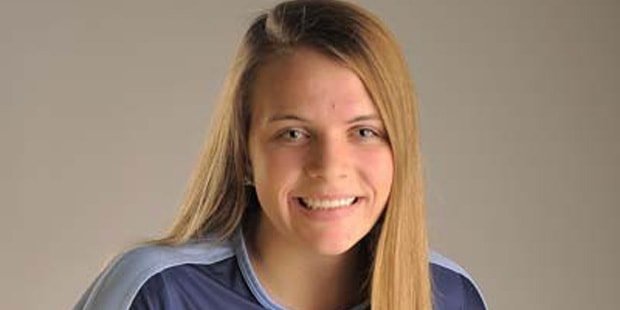 Sydney Biniak enjoyed being the top hitter on one of the best teams in Howard volleyball history, but she preferred fitting into a balanced attack. While that team-oriented approach likely cut her kill stats by a significant number, it never masked her excellence. 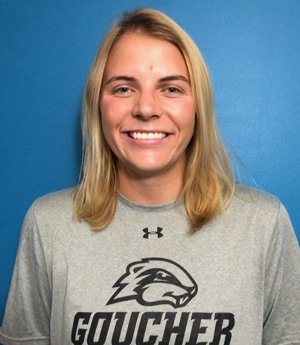 After a stint as a stats analyst at ESPN, Sydney Biniak has returned to Maryland and is back involved with volleyball, as a graduate assistant with the Goucher College Women’s Team.

A powerhouse 6-foot outside hitter, Biniak led the Lions to a 15-2 season in 2013 with 321 kills, 33 blocks and 232 digs. Her hitting percentage, .308, nearly doubled from her junior year. She accumulated those stats while playing beside a pair of middle hitters who combined for 290 kills.

“She was one of the most dominant hitters of the decade. No one hit harder,” said Atholton coach Larry Schofield, who coached Biniak at the Columbia Volleyball Club but coached against her while at Centennial.

“Syd had an incredible windmill. She was probably one of the most powerful hitters I’ve ever coached.”

The Lions finished 12-1 that year in the tough Howard County league and won the county title for the first time in over 30 years. Biniak counts the match against Glenelg that sealed the championship as one of the most memorable moments of her high school career.

“That was our senior night and it just so happened that we were both the top two teams in the conference,” she said, “and for Howard County, there’s no playoff for the county championship. It’s just whoever has the best record, so it was like a playoff game and it went to five sets. It was really, really exciting.”

Two weeks later in the Class 4A North regional semifinal, Biniak pounded down 26 kills as the Lions dethroned three-time defending state champion Sherwood, 15-5 in the fifth set. The Lions had just moved from Class 3A to 4A.

“There was a lot of build up with that game too. We ended up winning and I just remember the whole student section … stormed the court which is really uncommon for volleyball. We had just the most amazing student support and it was a white out. I remember there was a picture where you can only see me because I’m wearing a blue jersey and everyone else is wearing these white shirts. It was the coolest moment,” she said.

At Willian & Mary, she became only the seventh player in program history to record more than 1,000 kills and 200 blocks. She had 416 kills her senior year and earned third-team All-Colonial Athletic Association honors for a second straight season.

At Howard, however, Biniak excelled in more than volleyball. She also helped the Lions’ basketball team win the county title her senior year and won the Class 3A state championship in the high jump as a junior.

Always a multi-sport athlete, she started playing basketball at 5. She also ran cross country for a while but switched to volleyball at 11 or 12 and soon began playing with the Columbia Volleyball Club.

When it came time to think about college, it came down to volleyball or basketball.

“It was really hard for me to figure out what direction I wanted to go in college,” Biniak said, “but I think for volleyball, it’s just so exciting and every point, there’s a lot of anticipation and anything could happen at any moment and I liked that. It’s so fast-paced.”

After graduating from William & Mary with a degree in economics, Biniak, 24, worked for two years as a stats analyst for ESPN in Bristol, Conn.

She continued to play volleyball two or three times a week, but after she moved back to Maryland in August, she hasn’t played much partly because of the COVID-19 pandemic and partly because she hasn’t had time to find a league.

A career change brought her closer to home and back to volleyball. She’s studying for a Master of Education degree with an athletic program leadership and administration concentration at Goucher College. She’s also a graduate assistant coach for the Gophers and is helping coach at the Baltimore Elite Volleyball Club.

Biniak said she missed home while in Connecticut, but that she also wanted to coach and eventually, become a high school athletic director, so the move to Goucher fit perfectly.

“In my job at ESPN, I was just sitting at my computer and if I didn’t talk to anyone all day, it was fine, but I definitely missed that personal connection between people. I think that’s what drew me to coaching. It combined my love for sports and being involved with people.”

In the video above, Biniak displays her hitting prowess in a 2013 match against Reservoir High School.