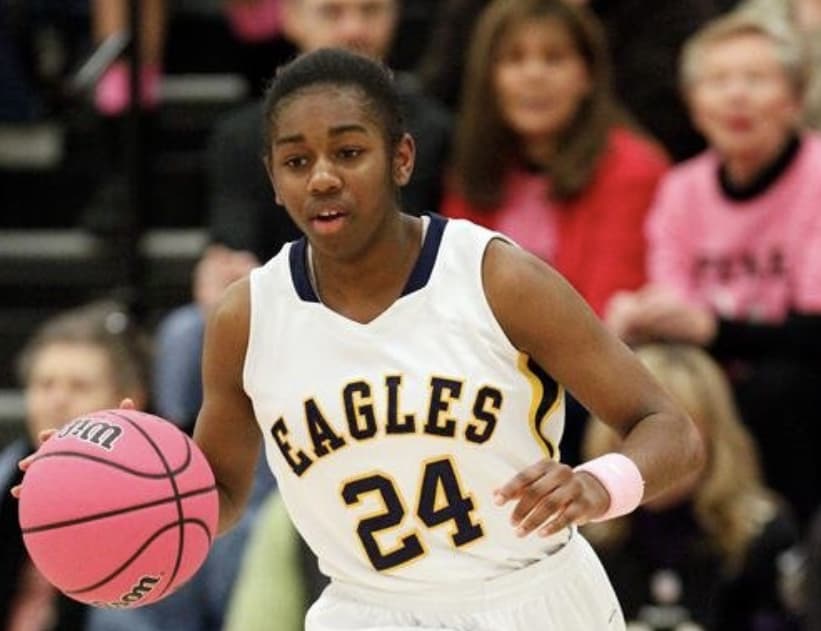 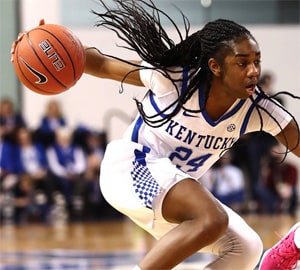 At Kentucky, Taylor Murray scored 1,359 points and added 280 steals and 450 assists. In addition, she was twice named to the SEC All-Defensive Team.

The Gatorade Maryland Girls Basketball Player of the Year as a senior in 2015, Murray is Varsity Sports Network’s No. 4 Basketball Guard of the Decade.

A four-time Baltimore Sun All-Metro selection — three times first team — she finished her Eagles career with 2,241 points before going on to a stellar career at the University of Kentucky.

Murray averaged 29.6 points, 8.8 rebounds, 4.1 assists and seven steals as a senior while leading the Eagles to their first B Conference championship and the Maryland Christian Schools Tournament Division I championship.

“I have been in girls basketball as a high school and AAU coach for 25 years and have never seen anyone take over a game like Taylor can,” Severn coach Chuck Miller told Gatorade Player of the Year officials.

Murray had a stellar AAU career with the Fairfax Stars and then the Philadelphia Belles and she played for the USA Basketball Under-16 national team, winning a gold medal at the FIBA Americas U16 championships in Cancun, Mexico in 2013.

Playing at Annapolis Area Christian was a much different experience. None of her teammates wanted to play college basketball, but she loved the all-around atmosphere of a small Christian school, including basketball. She took over games when she had to, but she preferred to be the true point guard, getting all of her teammates involved.

“Obviously she was blessed with a lot of talent, but she also worked extremely hard to develop that talent,” said Jim Domoracki, who coached Murray as a freshman and sophomore at AACS. “That being said, she was just a very humble person and a great teammate and I think that was probably her greatest quality. She always deflected praise to her teammates. She really cared about them and was good friends with them. Obviously she was passionate about basketball, but she never put that above her friends or her teammates.”

Her freshman year sticks out as one of her favorite high school memories.

“When you go into your freshman year, you don’t know what to expect,” Murray said. “I was the youngest one and I had a bunch of older girls to show me the way and we won the championship. When you think about things like that, you’re like, ‘Wow, a freshman winning the championship. It’s like a new beginning.’”

With all of her experience, however, it didn’t take long for the Eagles to look to the freshman for on-court guidance. In the C Conference final, she led them with 15 points and assisted Shannon Gierl’s game-winning 20-footer in a 35-34 win over St. John’s Catholic Prep.

Murray said playing at Annapolis Area Christian taught her a lot about leadership.

“Knowing the girls I was playing with weren’t the high skill level I was used to in AAU taught me patience. Understanding they didn’t have the same skill set that I had, I could help them in a different way. It just taught me a different role of leadership and I think that helped too as I went off to college, because you have to be more vocal when you’re in college.”

At Kentucky, she finished her career with 1,359 points and was the only player in program history to reach at least 1,350 points, 280 steals and 450 assists. Twice, she was named to the SEC All-Defensive Team.

Her senior year, the Wildcats finished 25-8 and reached the second round of the NCAA tournament. She averaged 12.4 points for the season and led Kentucky in assists with 123 and steals with 103. Her assist-to-turnover ratio of 2.9, ranked third in the SEC and 12th in the nation.

After graduation, Murray headed to Budapest, Hungary to play professionally. In her debut with Vasas Csata Akademie in September 2019, she scored 24 points and had nine assists.

When COVID-19 shut down the league in March 2020, she returned home but hopes to go back later this year.

“I’m not playing basketball right now, but I’m not retired from playing basketball,” said Murray, 24. “I just haven’t had a suitable contract where I felt like it was safe enough to go and play in Europe, so I’m just waiting on the next season to go which will be in August-September. Most of the time, I’ll have an offer there, but then another week later it’ll just be a no-go, because the COVID cases got high.”

For now, Murray is spending time at home with family and working out to keep in shape to return to the professional ranks.