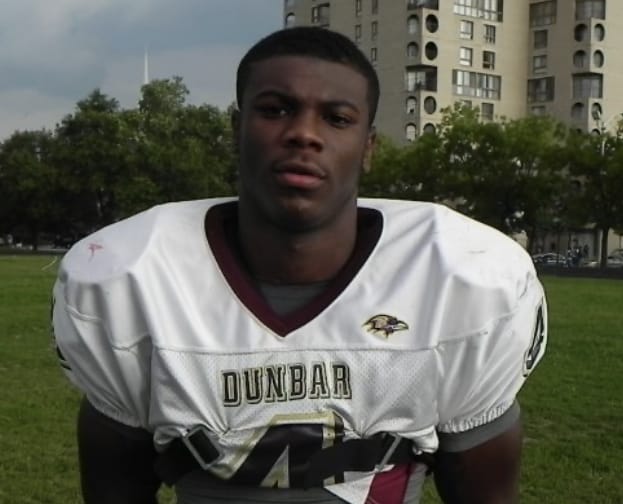 For a young Deon-Tay McManus, football was the perfect outlet to balance an overflowing energy that often landed him in trouble at school.

“I used to get in trouble in class because I was hyper and couldn’t sit still,” said McManus. “But on the field I could release all that energy and be free to just be a boy who was running around having fun.”

McManus channeled that energy and left his mark all over the gridiron. The Dunbar High graduate is VSN’s No. 4 Football Defensive Back of the Decade.

A three-year starter, McManus helped the East Baltimore school to three Class 1A state championship. He was a first-team All-Metro defensive back in his junior (2010) and senior (2011 seasons).

McManus, who played collegiately at Marshall University, is arguably the most talented Poet football player since Tavon Austin.

Austin, who led Dunbar to three straight state titles and hold the state’s all-time mark in rushing yards (7,962) and touchdowns (123), in his 8th season in the NFL .

“He’s Top 3,” said Poets coach Lawrence Smith said of McManus. “He’s a specimen. You’re talking about a kid who running back, safety, linebacker. He was just so athletic.”

McManus, 6-foot-2 and 215 pounds, accumulated more than 200 tackles in his varsity career. Dominating as a freshman on the junior varsity, Smith didn’t hesitated insert McManus as a starting linebacker for the varsity in the 2008 state semifinals.

“He wasn’t your typical 14-year old,” said Smith. who had lost to two linebackers to injuries.

After his versatility helped Dunbar to three state championships, Deon-Tay McManus was a wide receiver at Marshall University. He had 75 receptions for 787 yards and four touchdowns in two seasons.

“I was nervous and worried about how I was going to do, but Tavon (Austin) and the other guys told me that I was going to play well and not too think to much,” said McManus, who was 6-feet, 190 pounds as a freshman. “They told me to just play my game and that they’d always be out there with me. That really motivated me.”

Dunbar won a third straight 1A state title with a 20-19 come-from-behind victory over Western Maryland’s Fort Hill. McManus had seven solo tackles and a forced fumble in the match.

McManus became an impact two-way starter in 2009, intercepting seven passes as a free safety and scored eight total touchdowns, leading the Orleans Street school to the Baltimore City Division I championship and 1A state semifinals. He was selected the Small Schools All-State second team on defense.

As a junior, McManus posted 88 tackles and four interceptions as Dunbar claimed another 1A state title. He netted 25 receptions for 341 yards and scored touchdowns rushing, receiving and returning punts (eight total).

After failing to qualify academically, McManus spent 2012 at Atlanta Sports Academy. He signed with Marshall in 2013 and was redshirted.

McManus, recruited as a receiver, was moved to tight end and struggled. By midseason, McManus was back at receiver and flourished, finishing his redshirt freshman campaign in 2014 with 26 receptions for 422 yards and six touchdowns as the Thundering Hurd won the Conference USA championship and Boca Raton Bowl.

After netting 75 receptions for 787 yards and four touchdowns over his redshirt sophomore and junior seasons, McManus forgo his final season for the 2017 NFL Draft.

“The opportunity presented itself at the right time. I graduated already, so I sat down with my family and we just thought it over,” said McManus.

McManus garnered an invite to Green Bay’s rookie mini-camp as an undrafted free agent, but didn’t secure a spot for the Packers’ training camp.

McManus, who helped Marshall to the Conference USA championship and victory in the Boca Raton Bowl in 2014, was 38-5 as a varsity starter at Dunbar with two Baltimore City Division I  championships and three state titles.

Smith remembers McManus playing his varsity game at outside linebacker and the coaches placing him close to the Poet sidelines.

“He did exactly what we needed him to do and that’s all that mattered to him,” said Smith. “He was so gifted and talented.”