10 YEARS OF EXCELLENCE: VSN’S NO. 4 BOYS LACROSSE MIDFIELDER OF THE DECADE 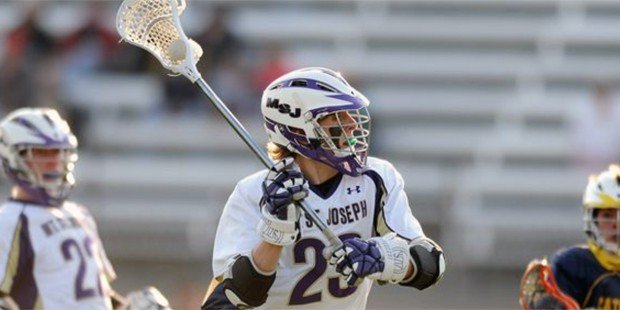 Playing lacrosse in the talent-rich MIAA A Conference was a blessing and a curse for former Mount St. Joseph product Bryan Costabile, VSN’s No. 4 Boys Lacrosse Midfielder of the Decade.

After an All-American career at the University of Notre Dame, Bryan Costabile scored 28 points in nine games as a rookie with the Atlas of the PLL, this past summer. He also works as a financial analyst for Under Armour.

The blessing part is easy to understand, in that the iron-sharpens-iron aspect of competing in a league that is often described as the best in the nation can be a conduit toward quick individual improvement.

And while Costabile did hone his already impressive skills by performing in such a challenging environment, his team usually found the going pretty tough in A Conference action, bringing to mind the plight of the hometown Baltimore Orioles in the American League East.

Just like the Birds going head-to-head with the New York Yankees, Boston Red Sox and Tampa Bay Rays, the odds against St. Joe making serious inroads against powerhouse programs from Boys’ Latin School, McDonogh School, Loyola Blakefield, St. Paul’s School or Calvert Hall College were decidedly long — if not completely off the board.

Still, even given those circumstances, Costabile not only managed to survive, he rose above and beyond to prove that a player of his size, skill and determination would eventually be recognized for his outstanding midfield play.

With the thought of a 6-foot, 180-pound athlete, who was also a highly regarded football quarterback, dodging down the alley or taking a step-down from 15 yards, rival defensive coordinators were quick to deploy their top defender to cover him — and that didn’t always work, either.

“St. Joe had a couple of other guys who were pretty good,” Brocato said. “But Bryan was the one guy you had to be hyper-forcused on.”

The Crusaders, the coach said, had a long day against the Gaels at least once during Costabile’s stellar career.

“We went over there (to St. Joe’s Schueler Field in Irvington) and they beat us, 14-13,” Brocarto recalled. “Bryan had five goals and he hit the crossbar a couple of times, too. We threw everything but the kitchen sink trying to stop him — a box-and-one, a double team, a pole — but he still found a way to beat us.”

“They put a pole on me, and I got one goal…..another goal and another,” he said. “Then the slides started to come quicker. Next, they tried to shut me off completely.”

By consistently having to overcome the opponent’s top defensive schemes while being the focal point of the Gaels’ offense, Costabile learned how to run an offense under duress.

“Being the initiator on the offense served me well in college (at the University of Notre Dame),” he said.

Costabile went off against St. Margaret’s.

“It was just one of those games when I couldn’t miss,” he said. “I think I had seven or eight goals that day.”

He finished his career with 149 goals and 38 assists after pouring in 53 goals and adding 11 feeds as a senior .

His ability to run an offense was not limited to lacrosse.

As the Gaels’ signal-caller, Costabile passed for nearly 2,600 yards as a senior and threw for 297 yards and four touchdowns in beating Bullis School, which featured current Pittsburgh Steelers backup QB Dwayne Haskins, Jr.

It was the second time in a row that Costabile had triumphed over the former Ohio State star.

“I kind of came out of my shell as a quarterback my senior year,” he said. “I played pretty well. We ran the triple option and I was allowed to change the play at the line of scrimmage.”

He said he thought about playing football in college, but he had already signed his National Letter of Intent to play for the Fighting Irish.

That summer, he earned a coveted spot on the US U19 Men’s Team and would go on to win a world championship with future roommate and VSN’s No. 1 Boys Lacrosse Midfielder of the Decade Ryan Conrad, who scored the winning goal in a 13-12 win over Canada in the title game.

Conrad, though, noted Costabile took one for the team by doing much of the dirty work as a defender for the Americans.

“Bryan is a competitor in the truest sense of the word,” Conrad said. “He played d-middie on that team — and took it like a champ.”

Costabile said that he was fortunate to be on a squad with so many great players from around the country.

He’s the only St. Joe player to qualify for a national team since Brendan Mundorf played for the US Men’s Team in 2014.

“I was the 23rd guy on a 23-man roster,” he said. “I was a d-middie for that team, and it gave me a taste of what it would be like in college. I started out as a d-middie at Notre Dame in fall ball until I worked my way up.”

And once he worked his way into the starting lineup in South Bend, there was no getting him off the first line.

After growing 2 inches and adding 25 pounds, his imposing presence and howitzer-like shot ensured that he would start all 51 games for the Irish.

And that meant that even with his broken jaw wired shut, and doctors telling him he would be out for six weeks, Costabile never missed a game.

That perseverance was on full display in the ACC Tournament when Costabile led Notre Dame to the title and picked up MVP honors.

He said that learning to play with the injury was difficult, to say the least.

“That’s the first time I started to feel comfortable (with the broken jaw),” he said. “That was a personal victory for me.”

When his career was over, he totaled 99 career goals while netting a single-season program-best 42 of them as a junior.

That year he was the team’s leading scorer, ACC Offensive Player of the Year and a USILA and Inside Lacrosse First Team All-America selection.

Despite having a COVID-19 shortened senior year, he ranks as the ninth-leading goal scorer in school history.

Ironically, the Under Armor financial analyst living in Locust Point also started his professional career as a defensive midfielder in the Premier Lacrosse League.

As usual, Costabile proved that his scoring touch is good enough to keep him on the offensive end of the field where he recorded 28 points in nine games for the Atlas this summer.