10 YEARS OF EXCELLENCE: VSN’S NO. 4 BOYS LACROSSE ATTACKMAN OF THE DECADE 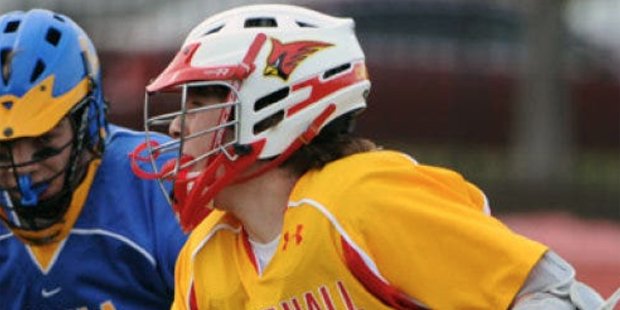 At North Carolina, Patrick Kelly scored a critical goal to help the Tar Heels in the 2016 national championship game and finished as the team’s fourth leading scorer as a senior. He also went on to play professionally in the MLL.

Considering that the 2012 Cardinals’ front line also featured All-World and Second Team All-America selection Ryan Brown (2nd all-time John Hopkins career goals), versatile Carter Brown (9th all-time Ohio State career points) and able Loyola University Maryland reserve Jordan Germershausen, Kelly knew he was in good company.
Even so, as the team’s leading scorer and quick learner of a new offense while helping Calvert Hall claim its first MIAA A Conference championship season in nine years, his status as the league’s premier player that spring was confirmed.
After all, Kelly was selected as the Boys Lacrosse Player of the Year by VSN and the Baltimore Sun, while sharing that honor with his cousin, Stephen Kelly, in the Towson Times, before heading off to play for the University of North Carolina.
He also was the C. Markland Kelly Award (no relation) winner, given to the top player in the state.
The Cardinals were fortunate to have someone who could readily grasp the concepts on the fly of the “read and react” system installed by his uncle, Calvert Hall coach Bryan Kelly, and the team’s offensive coordinator, Dave Huntley.
Moreover, Patrick Kelly’s ability to stay on an even keel in the best and worst of times helped the Cardinals to finally break through after falling in the 2011 A Conference final.
It wasn’t always easy for VSN’s No. 4 Boys Lacrosse Attackman of the Decade.
A stunning 11-10 loss to Conestoga (Pa.) early in the 2012 season, in a game in which the Cardinals led 10-5 in the third quarter, knocked them out of contention for a mythical national championship.
In some ways, the loss may have been beneficial in the long run in that, as Patrick Kelly told the Towson Times, “It helped us to stay focused on the process and let the outcome (of the remaining games) take care of itself.”
The Cardinals only lost one conference game after that disappointment and headed into the playoffs as a top seed brimming with confidence.
Yet a talented Boys’ Latin team was up for the challenge in a semifinal battle that may have been Kelly’s finest moment as a senior.
The Cardinals trailed the Lakers, 6-4, at halftime of a conference semifinal against a team that had future college stars Shack Stanwick (John Hopkins) and future Kelly Award winner Colin Heacock (Maryland) running a high-powered offense.
Patrick Kelly, though, spearheaded a comeback by totaling four goals while handing out as many assists in what turned out to be an 11-10 Calvert Hall triumph.
“One of Patrick’s greatest strengths is that he never gets too high or too low,” Stephen Kelly said. “He never let the moment get too big for him.”
Patrick Kelly said that the Cardinals might have been looking past the Lakers.
“We had run through some teams during the season, so we came into the game a little cocky,” Kelly said. “They had a really good team and they gave us a slap in the face. We needed a close game like that in the semifinal. It brought us back in line.”
In the championship game Kelly produced two goals and three assists in a 17-3 verdict over archrival Loyola Blakefield to finish an impressive season with 44 goals and 41 feeds to pump his career numbers to 118 goals and 105 assists.
He also scooped up 57 ground balls, was a fierce rider and was able to continually find seams in opposing defenses with heady off-ball movement.
Despite the lopsided score in the championship game, Kelly acknowledged that the Dons had plenty of weapons, too.
“Loyola was really good that year,” Kelly said. “They had a really talented defense. Overall, they were as good as it gets. We were just able to match up really well with them.”
The Under Armour All-American said that winning a coveted title with several other family members — including Stephen, younger brother Timmy Kelly and cousin Johnny Kelly — made the season even more enjoyable.
While his career in Chapel Hill may not quite have matched what he did in high school, it was still a fruitful one during which he was converted into a midfielder who scored the tying goal late in regulation of the Tar Heels’ 14-13 victory over the University of Maryland in the 2016 Division I championship game.
He said the play was not designed for him to take the shot.
“I was supposed to get the ball to Timmy,” said Patrick, who also played in college with his younger brother and Stephen Kelly. “But they (Terp defenders) never slid to me.”
Earlier in the season, he netted the winning goal in overtime against UNC’s ancient rival Duke. He finished his final campaign as the fourth-leading scorer with 27 goals and 11 assists.
Kelly would go on to play for the Major League Lacrosse champion Ohio Machine while attending the University of Maryland Medical School.
“That was a pretty busy year,” said Kelly. “The Machine had players like Kyle Harrison, Tom Schreiber and Peter Baum, so I was just a role player.”
He’s also happy in his latest role as an orthopaedic surgery resident at the Duke University School of Medicine.