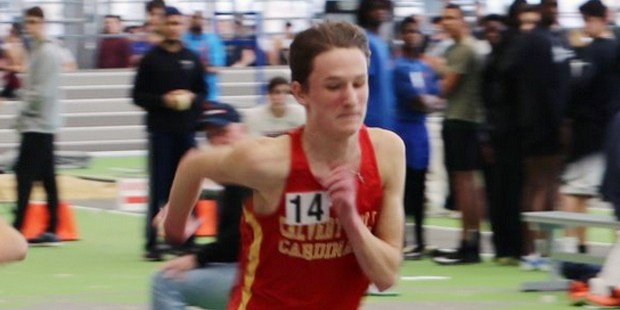 Varsity Sports Network’s No. 4 Boys Cross Country Runner of the Decade, Owen Johnson, who was also named the 2019 Gatorade Maryland Boys Cross Country Runner of the Year after leading Calvert Hall College High School to its first MIAA A Conference team championship since 2008, shared a couple of memorable moments at the end of the decade with No. 3 pick Sam Keeny, of South River High School.

The duo’s only head-to-head confrontation came in the 2018 Bull Run Invitational with Johnson prevailing by 10 seconds. 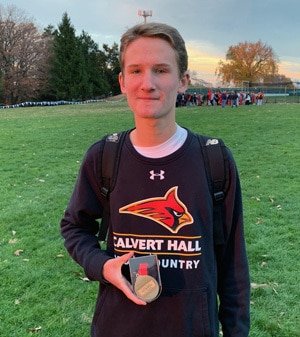 Owen Johnson shows off his gold medal after winning his first of two consecutive MIAA individual cross country titles in 2019=8.

A year later, even though they competed at different sites, their 5K numbers favored Keeny, who posted a 15:07 at the Great American Cross Country Festival in North Carolina while Johnson ran a 15:24 at the Third Battle Invitational in Virginia.

Johnson’s most memorable competitive moment, though, was his stunning come-from-behind victory over current Georgetown teammate Camden Gilmore in the 2018 A Conference final at McDaniel College.

Johnson claimed his first individual crown that day by rallying from a 10-yard deficit to nip the Loyola Blakefield standout at the finish line by .8 of a second.

“That was a big moment in Owen’s career,” said then-Calvert Hall coach Peter Frein, who now teaches and coaches in Dallas. “It just gave him a lot of confidence. That’s when he found his voice. For him to get that spot when we really needed every spot was very important. I think he was resigned to finishing second until Camden turned around to look where Owen was. When Owen saw that, it told him that Camden was running on empty and that he (Johnson) had a little more left in the tank.”

Johnson said that he and Frein planned to wear out the Loyola star, although they knew that accomplishing that feat would be easier said than done.

“I knew that if I could beat Camden, that could have been the difference between our team winning or losing,” Johnson recalled. “It is a hilly course with a lot of turns, so he would have the advantage because of his long legs. But we decided to push him and go hard around the turns. We wanted to make Camden beat me by making him run the whole 5K hard.”

Ultimately, even after Johnson’s individual win, the Dons prevailed by two points.

Yet even that disappointment proved to Frein that Johnson was more concerned with winning a team championship than he was celebrating his own individual accomplishment.

“We were waiting to hear the score,” Frein remembered. “And then when we found out that we lost, no one was more disappointed than Owen. I still have a photo of that moment (when the score was announced) hanging on my wall, and it really captures who Owen is. The look on his face told me how much he cared about the team. As a coach, you always want your best runner to care so much about his teammates — and Owen did.”

Last fall on the same course, Johnson sliced two seconds off his 2018 pace to win by 20 seconds in 16:20 in a successful repeat bid.

Because of the global pandemic, the prospects of Georgetown having a cross country season is becoming less likely by the day.

After all, with the announcement that classes at the school will be held remotely this fall, Johnson and several of his new Hoya teammates are planning on taking courses on the internet while living and training at the nearly 7,000-feet elevation of Flagstaff, Ariz. for a couple of months.

Until then, he has been quarantining while sticking to his training regimen of running up to 55 miles per week at a variety of paces, lifting weights and doing core-strengthening workouts to keep his trim 5-foot-9, 130-pound frame in tiptop shape.

“I’m not too strict about my diet,” Johnson said with a chuckle. “At the end of the day, I’m still a kid.”