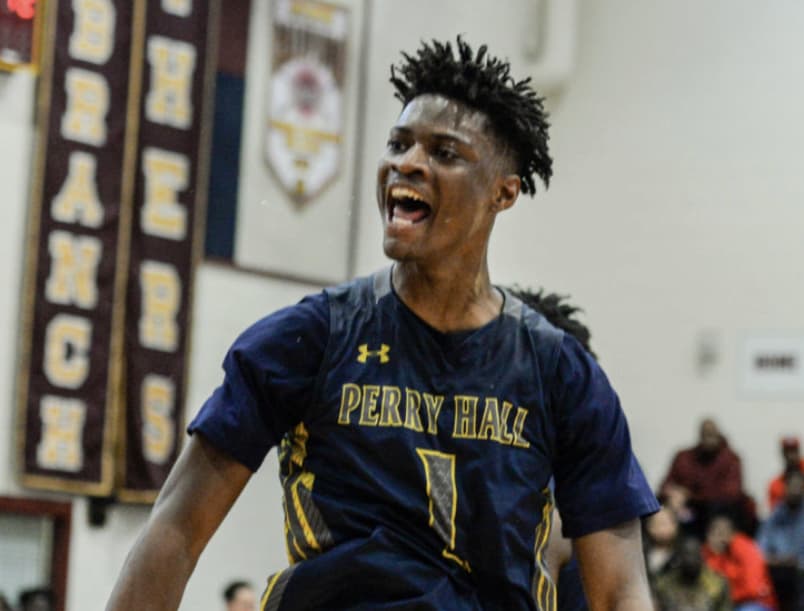 In 2013, LaQuill Hardnett and his family moved from West Philadelphia to Baltimore County. The change benefited Hardnett, as well as Perry Hall High.

Hardnett led the Gators to never before seen success on the basketball court court. Hardnett is VSN’s No. 4 Boys Basketball Forward of the Decade.

Perry Hall won back-to-back Class 4A state championships and was No. 1 in the final VSN Top 20 in 2017 – part of a Camelot-like run starring Hardnett, a 6-foot-8 play-maker.

“He was truly multi-dimensional,” said National Recruiting Report’s Tom Strickler, who has evaluated Baltimore area players the last 30 years. “When it came down to crunch time, he would take over the ball.”

Hardnett along with fellow 6-foot-8 teammate Anthony Higgs were Perry Hall’s “Twin Towers,” putting the Ebenezer Road school among the area’s elite. They were 6-foot-4 freshmen on the Gators’ junior varsity in 2014-15 and the program grew with them.

Hardnett was on varsity with Higgs the following season and Perry Hall’s unlikely ascension began. The Gators upset eventual Baltimore City champ Poly on the road and won their first region (Class 4A North) championship.

Perry Hall, with three sophomores including Hardnett in the starting five, fell to perennial 4A state power – and eventual state champion – Prince George’s County’s Eleanor Roosevelt (59-49) in the state semifinals at the University of Maryland.

“We knew we had the talent from the beginning to get here,” Hardnett said. “My goal was too was to get a ring, but we fell short. We’ll be back.”

After leading Perry Hall to a historic run, LaQuill Hardnett is shining in his first season at the University of Buffalo. He was shooting nearly 70-percent coming off the bench, before entering the Bulls’ starting lineup and leading to them to six wins in their last seven games.

The Gators made history the following season, winning their first Baltimore County championship and repeating as 4A North Region champions. After dispatching Annapolis in the 4A state semifinals, Perry Hall got redemption with an overtime victory over Montgomery County’s Quince Orchard in the final.

It was Hardnett who kept the Gators’ run at destiny intact, hitting a floater in the lane with four seconds left in regulation to force overtime. He added four throws in the extra period.

Perry Hall became the first Baltimore County school in 54 years to win a basketball title in the state’s largest classification. The Gators finished No. 1 in VSN’s Top 20, another first.

“We made a vow to come back and we did it,” said Hardnett, who averaged 12.9 points and 10.2 rebounds to earn first-team All-Metro honors.

Perry Hall opened the 2017-18 season at No. 1 in VSN’s preseason Top 20. The Gators’ games were suddenly an event with their cozy gym filled to capacity for every home game and local media filling a special platform erected behind the scorer’s table. The new found celebrity may have been a distraction as the Gators were up-and-down for much of the regular season, but, led by Hardnett, they righted the ship for another championship run.

The Gators reached a third consecutive state 4A final four, and, in the title game, Hardnett carried them to a repeat. He scored 12 of his game-high 31 points in the fourth quarter as the Gators rallied past Prince George’s County’s Bladensburg.

In addition to the 31 points, Hardnett pulled down 12 rebounds and blocked two shots.

“It was like, I got to bring my team with me and go get it,” Hardnett said during the post-game press conference. “If I don’t go get it, who’s going to go get it? So, I had to pull them with me and I knew they were going to follow me as soon as I started.”

“It didn’t look good for us for a long time in this game and he’s (Hardnett) like, ‘I am not letting my team lose,’” said Panageotou, whose team trailed by 10 points in the second half.

Hardnett, who earned a second straight All-Met first-team honor (averaged 17 points, 10 rebounds and four assists), totaled 1,087 points in his varsity career. He signed with the University of Cincinnati, but after red-shirting his freshman season and the departure of then Bearcats’ coach Nick Cronin to UCLA, Hardnett transferred to Buffalo.

After averaging 2.8 points and 2.8 rebounds as a reserve last season, Hardnett is flourishing in 2020-21 for the Bulls (12-7 overall), nearly doubling his output (6.7 points, 4.4 rebounds) off the bench. Hardnett, who has started eight games including the last seven, is shooting a robust 69-percent (34-of-49) from the field. Since Hardnett entered the starting five on a regular basis, Buffalo has gone 6-1. He recorded his first career double-double in a 88-64 win over Miami (OH) on Feb. 6th, scoring 20 points and collecting 10 rebounds.

Just like when he was a precocious sophomore at Perry Hall, Hardnett sees a bright future at Buffalo.

“There’s a lot of positive energy  and they’re progressing,” Hardnett said. “I feel like I can be a part of something that they can build.”