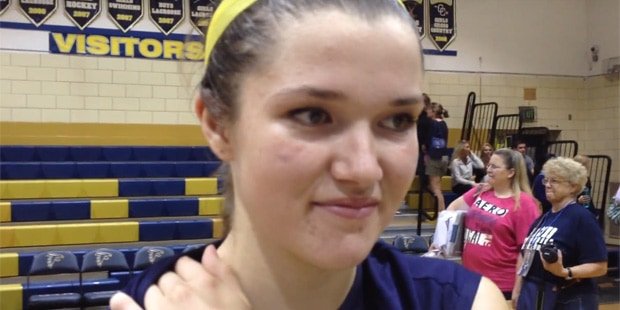 Not many star volleyball players hit from the right side of the net. The big power usually comes from left, from the outside hitter. 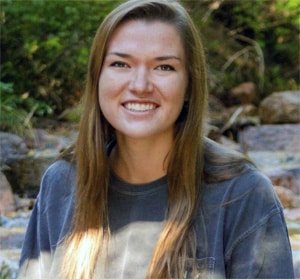 After splitting an excellent college volleyball career between Bryant University and Palm Beach Atlantic University, Sofie Hoekstra now lives in Colorado Spring, CO where she is pursuing a career in Olympic sports management.

Sophie Hoekstra proved an exception to that, leading Severna Park to a perfect season and the Class 4A state championship as a senior in 2014.

“She’s a lefty which makes it ideal for her in terms of hitting on the right side,” Severna Park coach Tim Dunbar said. “That becomes her strong side hitting which in high school gives you a distinct advantage. There are an awful lot of teams that just don’t have exceptionally good right side hitters that happen to be left handed.”

Not a lot of other teams were defensively ready for Hoekstra’s power. She finished her Falcons career with 485 kills and 77 blocks as well as 363 digs, 132 assists and 114 aces.

“That season we had mostly all juniors and Sophie was the senior. She led us to the state championship,” said setter Morgan Kline, a junior at the time. “She was just a really good leader. She had a calming presence on the court, but she was a very aggressive and dominant player.”

Although her mother played volleyball at Simpson University in California, Hoekstra owes her volleyball career to her sister Abbie, who is two years older.

Both sisters played soccer first, but when Abbie didn’t make the soccer team at Severna Park as a freshman, she tried out for volleyball. That started a fine career for Abbie and it sparked Sophie to switch too. She started playing club volleyball in the eighth grade.

“The fun thing about volleyball is someone scores every point,” Sophie said. “It’s not like soccer where you’re waiting 45 minutes for a goal. There’s always something happening and I’ve always loved team sports, so that was huge. I also like how maybe someone shanks the first ball, but the second person can recover it and then the next person can better that ball. If you make a mistake, someone can better the ball and there’s a lot more points after that.”

For the 6-foot Hoekstra, winning the state championship as a senior was the most memorable moment of her high school career, especially because it came a year after being swept by Dulaney in the state final.

Dunbar said Hoekstra was “incredulous” after the loss and that she had a “steely resolve that this was not going to happen again.” Kline remembered that after the Falcons dropped a set to South River in the Class 4A East regional final during their 2014 title run, Hoekstra stomped her foot, looked her teammates in the eye and said, “We are going to win this match.”

Hoekstra had 16 kills in the state semifinal victory over Sherwood and added 18 in the championship win over Northwest, which would go on to win the next four Class 4A titles. She had a .401 hitting percentage in the final.

The next spring, she helped her Metro Volleyball Club win the USA Volleyball U18 National Championship.

“Sophie was technically fun to watch,” Dunbar said. “She just had technique down. Her style of play was almost textbook in terms of her form and her volleyball IQ was incredibly high. She could figure out what was going on on the court even before it was happening, she could anticipate. A lot of high school kids don’t have that ability.”

As a freshman at Bryant, Hoekstra led the team in kills and earned Northeast Conference Rookie of the Year honors.

She then transferred to Palm Beach Atlantic University, which she said was a better overall fit for her. In her senior year, she finished with 166 kills and 55 blocks as the Sailfish (29-5) fell to eventual Division II national champion Tampa in the South Region Championship.

Hoekstra, 23, lives in Colorado Springs where she recently completed a nine-month program through the Fellows Initiative, which combines internships with theological study, mentoring and service. She worked with the U.S. Anti-Doping Agency, which conducts drug testing for Olympic sports.

With the governing bodies for 26 Olympic sports located in Colorado Springs, Hoekstra would like to work for one of them, but, she said, the pandemic interfered with those plans.

“Because of COVID, none of them are hiring. They’re all in hiring freezes. The Olympics obviously got pushed back a year, so now I’m working for an outdoor company called EVO and I do customer service for them working remotely,” said Hoekstra, who graduated with a degree in business management.

She said the hiring freezes will last through March, but after that, she hopes she’ll have a chance for a job, likely in anti-doping or in compliance with the governing body of an Olympic sport.