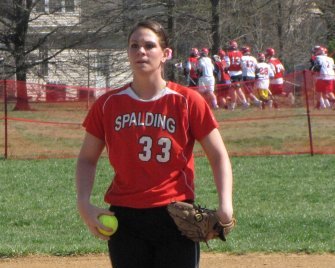 “If you ask my dad, he can remember every game, every pitch, every opponent, every strikeout,” laughs Weiman. “I wasn’t a player who wanted stats or highlights. It was about the team.”

Weiman’s team-first attitude yielded tremendous results in her softball journey. The Archbishop Spalding alum is VSN’s No. 3 Softball Pitcher of the Decade.

The Cavaliers won the third of four IAAM A Conference titles in 2011. Weiman was the Sun’s All-Metro Player of the Year as a junior, posting a 17-3 mark with 305 strikeouts and a 0.15 ERA. 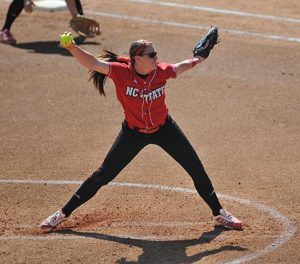 After a stellar high school career at Archbishop Spalding, Emily Weiman rewrote the record book at North Carolina State University. She was the first N.C. State pitcher with 100 career wins (108) and departed as the program’s leader in several categories and was the Atlantic Coast Conference’s Pitcher of the Year and Tournament Most Valuable Player in 2013.

Weiman, who mainly played third base as a freshman and was the No. 2 pitcher behind Elaine Nescio, was the only senior on Spalding’s 2011 roster.

“We were young and it was basically a new team because we added seven players this year,” Weiman explained. “Since I’ve been here for four years, I kind of had to step up and lead them as best that I could.”

“She is an absolute leader on the field,” said former Spalding coach Kristin Dulay, who coached Weiman for three years. “Everyone looked up to her and she was just a voice for me to the girls.”

Weiman, a Pasadena native who admitted she’s “sort of a perfectionist,” said Spalding met her academic and athletic goals.

“I wanted to be the best student, get the best grades which my parents placed a lot of emphasis on. Softball played an important role,” said Weiman, who was a major offensive contributor in her four seasons. “I knew it would be a challenge to make varsity as a freshman. The older kids showed me the ropes that allowed me to be comfortable and grow as a player and a student.”

During her junior year, Weiman committed to North Carolina State University. She would become one of the best in Wolfpack softball history.

Weiman became the first N.C. State pitcher with 100 career wins (108) and departed as the program’s leader in appearances (195), games started (167), complete games (128) and innings pitched (1,084.7). She was the Atlantic Coast Conference’s Pitcher of the Year and Tournament Most Valuable Player in 2013 and a three-time All-ACC first-team selection.

Weiman, a three-time All-ACC first-team pick, is most proud of being selected to the league’s All-Academic Team in each of her four years. As a senior, she was the ACC Scholar Athlete of the Year.

“I give my teammates and coaching staff a lot of credit because they allowed me to excel on and off the field,” said Weiman, who finished her academic career with a 3.818 grade point average and holds the school record in 21 different pitching categories.

“It was hard to put anyone else on the mound when you know what Emily can do,” said Wolfpack coach Shawn Rychcik.

After graduation, she was drafted by the Pennsylvania Rebellion of the National Pro Fastpitch League. She played two years with the Rebellion before joining the Akron Racers in 2017. 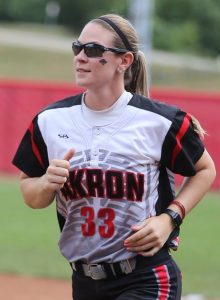 Emily Weiman played professionally for three seasons in the National Professional Fastpitch League before retiring in 2018. She lives in Anne Arundel County with her husband and son and works as pharmaceutical sales representative.

“To have the opportunity was a dream come true, to play with the best of the best,” said Weiman, who was also a  graduate assistant at East Carolina. “I was to dominate to some degree in college, but there were no breaks in the lineup…every player was the best from their college.”

Weiman, who earned a Masters in Sports Management, said the NPFL salary wasn’t livable. With a wedding around the corner, Weiman, now Siebers, decided it was time to move to the “next chapter,” minus softball.

“I hadn’t really got to experience things outside of softball. It was a huge sacrifice and you miss things,” said Weiman-Siebers, who moved back to the area in 2018 and became a pharmaceutical sales rep.

Weiman-Siebers said pharmaceutical sales keeps her competitive edge. She has a 16-month old son and is expecting a second child with her husband.

Weiman-Siebers said she would like to return to softball when her kids are older.

“I love the game, I love teaching. The desire there,” said Weiman.

She mentioned her son’s daycare teachers said he can swing a bat.

“I appreciate all the moments I had. I can’t wait to contribute that to my kids one day and be that dedicated parent like my parents were,” said Weiman-Siebers. “It’ll definitely be a full circle moment.”