10 Years of Excellence: VSN’s No. 3 Pitcher of the Decade 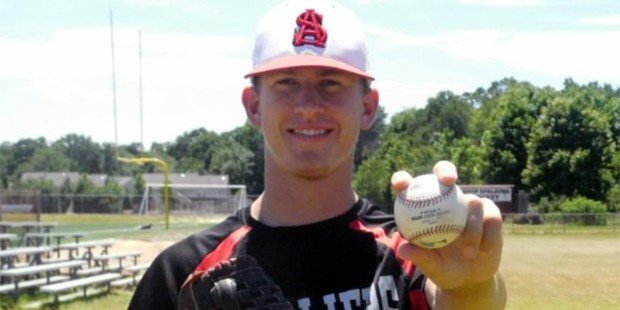 It’s a tired old cliché, but it’s very true in this case. 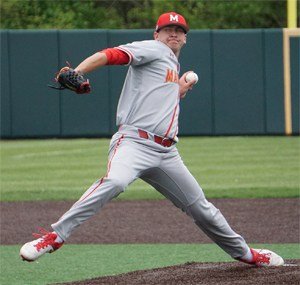 Drafted by the Baltimore Orioles, Tyler Blohm passed on an opportunity to turn professional right out of high school and instead accepted a scholarship to pitch at the University of Maryland. Injuries have transitioned him to the bullpen where is a key left-handed specialist for the Terps.

Tyler Blohm (pronounced BLOME, like in HOME), Archbishop Spalding graduate and former ace currently at the University of Maryland, is the son of Peter Blohm, former Johns Hopkins ace and member of the Blue Jays Hall of Fame. Each of them ruled on the bump at their respective schools.

Dad was drafted by the Atlanta Braves in 1987 and would go on to pitch six years in the minors, three at the AAA level with Syracuse. He had gone from the Braves to the Orioles in 1988 and in the fall of that year was traded to the Pittsburgh Pirates for first baseman Randy Milligan, who would have a couple pretty good seasons with the O’s.

Pete Blohm, who is currently a medical device regional Manager, ended up with Toronto and was scheduled to make his MLB big show debut in 1994 before the Players’ strike was settled. What Pete Blohm learned from pitching a step from the bigs, proved to be valuable to Tyler later.

“My dad taught me everything I know,” said the former Spalding star. “I learned so much from him, but he never shoved or pushed the game on me. He let the game come to me. I fell in love with baseball on my own.”

“The complete dominance his senior year was incredible to have a front row seat every time he pitched,” said Cavalier coach Joe Palumbo.

Spalding’s incredible three-year run (Cavs were 76-12, .864 pct. in those years) in the highly competitive conference is topped only by Calvert Hall’s five-year streak from 2005 through 2009. Blohm was near perfect in his final season to complete the 3-peat and was named the VSN Pitcher of the Year, Baltimore Sun All-Metro and Player of the Year and the Gatorade Maryland Player of the Year.

“It was a special team and an opportunity of a lifetime,” said the ace. “The 3-peat was awesome, doesn’t get any better.”

The Cavaliers, who went wire-to-wire as the VSN No. 1 ranked team in its Top 20, defeated Gilman, 5-3 in the 2016 grand finale and coach Palumbo has a memory etched in his head from that game – not Blohm’s pitching but another gem from the left-hander.

“He did not hit often for us, but he constantly worked at it during practice and when he got his opportunity, he was ready,” said the coach. “He hit a double in the 2016 championship game that helped us win a third consecutive league title. It’s one of my favorite memories of Tyler. It was a cool moment.”

Blohm opened his last season serving notice to area opponents by stopping two very good teams. He one-hit with eight strikeouts, St. John’s of D.C., 2-0, in a non-conference game and followed it up with 10 K’s and a four-hitter to defeat MIAA nemesis and annual contender, Calvert Hall, 5-2.

“Tyler Blohm is one of the players that come to mind when you think of players who elevated the profile of Archbishop Spalding baseball in the state of Maryland and the region,” said coach Palumbo, whose father, Jeff, coached the 2011 Spalding team that won the MIAA A Conference title and was succeeded by his son two years later.

“Having a dominant lefty on your team like Tyler gives the whole team a confidence every time he would take the mound. That is why he was one of our big game pitchers from such an early time as a sophomore and through the rest of his career.”

Blohm mainly threw a fast ball, curve and changeup. His poise was exceptional from his sophomore year through his high school career that was appealing to pro scouts. One of those was Dean Albany then with the Baltimore Orioles and currently with the Philadelphia Phillies. Albany and the Orioles chose Blohm in the 17th round of the 2016 major league baseball free agent draft.

“Tyler had a good frame that gave him a lot of room to get bigger and stronger,” said Albany of Blohm’s 6-foot-3, 185 pound high school body that went to 6-foot-4, 210 at Maryland. “He had good velocity for a left-hander (low 90’s), had good sink and his breaking pitches were pretty good. Excellent control too.”

Being drafted by the Orioles was another feather in Blohm’s cap. He chose not to sign and instead accepted a scholarship to the University of Maryland. Before heading to College Park, Blohm played in the 35th Brooks Robinson High School All-Star Game at Camden Yards in July of 2016. He and two of his Spalding teammates stole the show in leading the South to a 5-2 victory over the North following the MLB game between the Orioles and Toronto Blue Jays.

Blohm was the winning pitcher and South MVP after starting the game by throwing two scoreless innings giving up only one hit and striking out four, the last three batters he faced in succession. Teammate and battery-mate Carter Sears called signals for Blohm as usual and ended up catching the entire game and centerfielder Billy Godrick had two hits including a solo home run and took Most Valuable Offensive Player.

Sears and Godrick are also members of this VSN All-Decade Team at their respective positions.

Blohm entered Maryland and had an immediate impact before battling a mystery shoulder injury at the end of the 2018 season that led to his moving to the bullpen this his senior year, after surgery to remove a bone spur. His freshman year at College Park, Blohm was 8-6 with a 3.48 ERA after making 16 starts for the Terps and was tagged as a Freshman All-American and Big-10 Freshman of the Year. His performance helped the Maryland gain a spot in the NCAA Division 1 Tournament in 2017.

The following year, Blohm won six games as a sophomore as his shoulder started to nag him. Blohm, who is 10th on Maryland’s career wins list with 16 victories, lost some of his fast ball velocity (from 91-92 mph to 87-90 mph) because of his problem and being limited in his appearances as a junior (2019) he was relegated to being a reliever.

“Unfortunately, I caught the injury bug and my velocity has gone down some, but I’m happy to be playing,” said Blohm from Ilinois while on a Big-10 road trip recently with the Terps having won 14-of-16 games. “I’m a specialist now. My job is to get outs against lefthand hitters.”

With the 2020 season having been a wash because of the COVID-19 pandemic, Blohm told the Terps’ Diamondback publication and author, Alexander Dacy, “I’m forever grateful to the University of Maryland to give me a chance to comeback (2021). I feel there is a lot of unfinished business with this team and we’re all just getting started.”

Blohm has a communications degree and is working on a Masters in technology and just might follow in his dad’s footsteps.