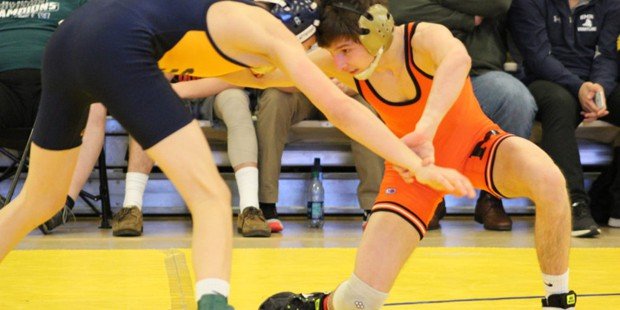 Like most winter sports high school athletes in the Baltimore area, McDonogh wrestler Cooper Flynn is hoping to have some sort of season in the 2020-21 school year, even if it is a truncated one.

Regardless of whether Flynn takes to a high school mat this academic year or not, he already has accomplished enough to rank him as VSN’s No. 3 Lower-Weight Wrestler of the Decade.

Flynn, a native of Tennessee, matriculated to McDonogh School in search of the best available competition and, along the way, he has provided the same for his opponents.

In three years with the Eagles, Flynn has compiled a career record of 132-17 and he won back-to-back MIAA titles after placing second in the league championships as a freshman. He has also won two private school state championships and a slew of other big events.

The 42nd rated recruit in the nation, Cooper Flynn has committed to do his college wrestling in the Atlantic Coast Conference at Virginia Tech University.

Currently, ranked No. 3 in the nation in at 120-pounds by The Open Mat, Flynn is a three-time place winner at the prestigious National Prep Tournament, winning the title last winter when he was named VSN’s Lightweight Wrestler of the Year.

“His family made a big sacrifice in wanting to come to McDonogh, far from home,” said McDonogh head coach Pete Welch. “He keeps finding ways to challenge himself and push himself to get better. I’ve seen him evolve as a leader on our team and really help the other kids. When you have one of the best kids in the country be a leader on your team and really caring about the other guys it becomes contagious and everybody wants to get better.”

Flynn showed the world just how talented he was in December of 2019 when he placed second at the Walsh Ironman Tournament (OH) and he believes that event propelled him to even great things as a junior.

“Ironman was a great tournament for me,” Flynn told VSN last year. “Ironman was something I started training for since I got back on campus for school in August. That was my goal all school year up until that point. We weren’t training for anyone specifically. We were just training hard knowing that my goal was to go out there and win it. I knew I could. I thought I was completely capable. I think I came in seeded third. I knew each match was going to be tough. I think my first match of the tournament was a 4-1 match. I felt that I was the best. I believed in my training and my coaches.”

Flynn again came up big in another national event, placing third at the Beast of the East. He suffered a 3-2 loss Alex Almeyda of St. Joseph Regional (NJ) in the semifinals, but battled back to take third and would not lose again for the rest of the season, posting a 47-2 mark.

“To be honest, I didn’t realize what my record was until the banquet,” said Flynn. “We’re going through and talking about everybody’s record and I heard it, and it kinda just hit me, like; that’s pretty crazy. I feel like both of those matches (I lost) were matches I should have won. No other blame. It was just me not wrestling. They were good matches, but I was completely capable of winning both of those.”

At the National Preps, Flynn had to go through an old rival in Blair Academy (NJ) star Ryan Miller. Flynn entered his junior season with a 1-3 mark against Flynn and had lost twice to him his sophomore campaign. However, he defeated Miller in the semifinals of the Ironman and then followed up a 3-2 decision in the finals of the National Preps.

Flynn also recently decided on where he will wrestle in college, committing to Virginia Tech University. Projected at 125 or 133 in college, Flynn is rated as the #42 overall recruit in the Class of 2021.

Despite his lofty recruiting stature, Flynn will have to battle for his place in the Hokies lineup. Tech’s wrestling room already has a ton of talented lightweights, including redshirt freshman Sam Latona, who is ranked 17th in the nation at 125, along with former New Jersey state champ Eddie Ventresca, who is red-shirting this winter.

Flynn, however, has never shied away from a challenge or top competition. From Tennessee, to Owings Mills and eventually Blacksburg, Virginia, he is driven to challenge the best and be the best.