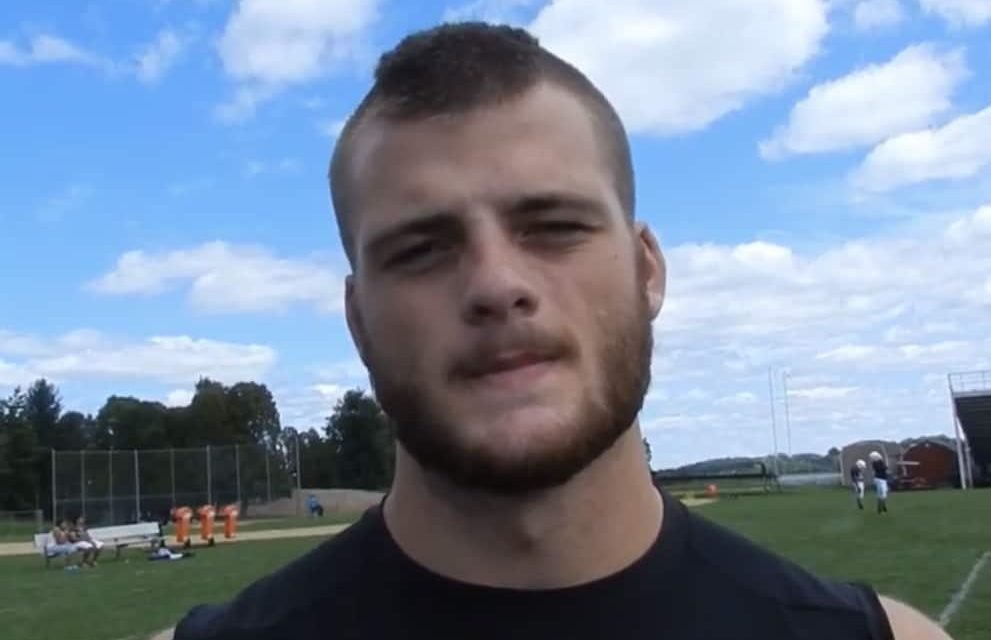 As an eighth grader in 2009, Wyatt Cook did not look like your typical youth football player. He was already a strapping 6-foot-1 and 210 pounds, and was too big to continue playing with his the Westminster Wildcats youth program.

One year with the West Carroll Veterans, a member of the non-weight restricted Baltimore Youth Football League, however, and Cook was suddenly on the radar of every private school football program in the state, ultimately helping him find his way to McDonogh School.

As Wyatt Cook grew from a man-child to a man at McDonogh School, the Eagles also grew as football power in the MIAA A Conference.

With the Eagles he stood out just as he did in eighth grade. This time, not for his size (which grew to 6-foot-2, 235 pounds) as much as his performance.

Cook, VSN’s No. 3 Linebacker of the Decade, was the centerpiece of arguably McDonogh football’s greatest run. He was VSN’s Defensive Player of the Year in 2013 as a junior after recording 99 tackles, six sacks and four forced fumbles.

After a 3-8 season with a young roster in 2012, the Eagles were a juggernaut in 2013, going 11-0 to finish No. 1 in the area polls. McDonogh capped its season with a 37-6 pounding of rival Gilman School to claim the MIAA A Conference championship.

“We had another year to grow, it was kind of like a rec league team, you start out in sixth grade and by the time you’re an eighth grader, you’re beating up on everybody,” said Cook. “The journey was long and hard, but in the end, we did well.”

The Eagles allowed an area-best 85 points. McDonogh finished No. 2 in the state media poll.

The Owings Mills school repeated as MIAA A champs in 2014, concluding a late fourth quarter rally against Gilman School and eventually winning in overtime. The Eagles (7-3), who finished No. 1 by VSN for the second straight season, shared the MIAA A crown with Gilman.

It was the first time in two decades, McDonogh defeated its Roland Park rival. Cook finished the season with 82 tackles, earning first-team All-Metro and consensus All-State honors for the second straight year.

Cook grew into a complete middle linebacker, displaying the strength to shed blockers between the tackles and sideline-to-sideline speed to bring down running backs and receivers. He was also a champion wrestler, winning two MIAA titles at 285 pounds and twice placed at the National Preps Tournament, including third as a junior.

“His preparation and process improved week-to-week, he was basically a coach on the field,” said Damico, now Mount St. Joseph coach. “He studies film all the time and know opponents’ tendencies, formation, groupings. He’s basically the quarterback of the defense.”

Cook opted to take his talents to the University of Purdue, but injuries and other issues kept him from making much of an impact on the college level. He red-shirted as a freshman before making the switch from linebacker to defensive end. He appeared in just six games for the Boilermakers, over the next two years, recording seven tackles.

A bright spot for Cook was playing alongside older brother, Wes, in 2016. Wes, who starred at Winters Mill transferred from East Carolina, made the Boilermaker roster as a walk-on. He played special teams and was a backup safety for two seasons.

Wyatt returned home, finishing up his college career at the University of Maryland in 2019. He appeared in three games and recorded four tackles.

Cook remains the only underclassmen to be selected VSN’s Football Defensive Player of the Year.