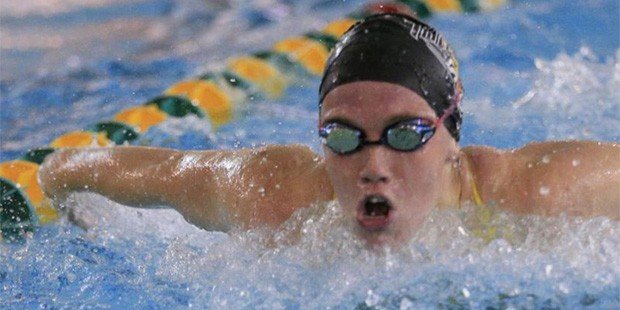 In her senior year at Notre Dame Preparatory School, Kendall Krumenacker was just as accomplished on the pool deck as she was in the water.

There was no doubt about her value to the team in terms of compiling points, considering that the future Towson University standout not only won an individual crown in the 50-yard freestyle, she was also part of two winning relays at the 2014 Interscholastic Athletic Association A Conference championship meet to pace the Blazers to their third title in four years.

She joined fellow senior Dani Potis, junior Kate McComas and sophomore Selah Peacock to take the 200 freestyle relay and was in concert with juniors Mary Kate Clancy, McComas and Potis in setting a meet-record 3:41.74 in the 400 freestyle relay to help NDP (431 points) to carry the day against runner-up Mount de Sales Academy (381).

Moreover, the Blazers avenged a loss to McDonogh School in the 2013 A Conference finale, which made the victory even sweeter. 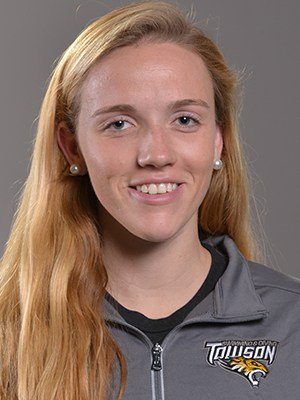 As for her impact from the pool deck, VSN’s No. 3 Girls Swimmer of the Decade added a hefty amount of support for her teammates through positive reinforcement.

A total team player, Krumenacker represented the very best of what it means to be a champion by the way she and her senior colleagues and captains Hayley McComas, Mary Claire Hudak and Carrie Davison were able to sustain such excellence throughout the season by encouraging their teammates to greater heights.

Krumenacker said that while she didn’t necessarily want to leave a personal legacy at NDP, she would rather leave a competitive spirit that could be handed down from generation to generation.

“That leadership — being a captain — meant so much to me, even if some people might think it was silly,” she said.

NDP coach Terri Byrd was quick to point out that Krumenacker’s leadership qualities were key components of the Blazers’ perfect season that also boasted an East Coast Catholic title in 2014.

Krumenacker, the coach said, worked with all levels of NDP swimmers.

“Kendall was much more than a talented swimmer,” Byrd said. “She also had a great sense of what being part of a team is — she cheered and motivated her teammates, supported the struggles, celebrated the successes and embraced all of the strategies and hard work that goes into making a winning team.”

Yet it took some pointed words from Byrd to allow Krumenacker, then a sophomore, to reach that status.

“I was being stubborn, and Miss Byrd sat me down one day and told me I could do more (for the team),” she recalled, noting that the moment was pivotal in her high school career.

Byrd said that Krumenacker was always an exceptional student who participated broadly in other school activities and community service.

“She is a happy person and always likes to have fun,” the coach added. “She would bring that element into the practices to lighten the mood of some very hard practices and give them a positive slant.”

Krumenacker’s history of success had already given her credibility with her teammates.

As a freshman, she was part of the deep depth that helped the Blazers snap McDonogh’s eight-year reign atop the A Conference when they beat the Eagles 452-415 for the 2011 banner — without claiming an individual title.

Krumenacker was a runner-up in the 50 freestyle and third in the 100 backstroke while finishing first in both freestyle relays.

Those were two of her favorite career races, she said, because of her admiration for upperclassmen Leigh Musselman and Melissa Dorsch.

“I had looked up to them for so long,” she said. “Just to be on a really good team with them meant a lot.”

The following year she made a mockery of a sophomore slump by helping the Blazers to pull off a repeat in the A Conference while trouncing the second-place Eagles, 472-336.

Krumenacker prevailed in the 50-yard freestyle (24.61) and 100 backstroke (meet record, 57.04) while she teamed with Potis, senior Musselman, junior Nana Salvatori and McComas to sweep the 200 and 400 freestyle relays as well.

NDP slipped, however, in her junior year after five of the eight seniors who graduated the pervious spring and went on to swim at the Division-I level left a void that the Blazers were unable to fill.

That’s why she and her teammates were so determined to hang another IAAM banner in 2014.

“It was really important for us to bring the title back to NDP,” Krumenacker said.

As a member of a lacrosse family — her late father, John Krumenacker, was an All-American midfielder and captain of the 1985 John Hopkins University national championship team — that embraced competitive athletics, Kendall played lacrosse until the eighth grade.

That’s the juncture when her Loyola Blakefield Aquatics coach Keith Schertle told her that it was time to decide which sport fit her the best.

“He told me that I could have a good future in swimming,” she said. “I guess I’m the black sheep of the family, but it was pretty apparent to me which sport it would be. All my friends were swimmers. But people still recognize my last name because of lacrosse and we’ve been so lucky to be a lacrosse family. We still like to go to the Hopkins’ games.”

After being recruited by Towson to continue swimming at the next level, her collegiate career skyrocketed from the get-go when she set a freshman school record in the 200 backstroke (1:58.79), which was the third-fastest time in program history. She also swam on winning 800-yard freestyle relay at the Colonial Athletic Association championships.

Due to an upheaval in the coaching staff her sophomore year, stress from that situation caused an illness that forced Krumenacker to miss most of the season.

However, she rebounded as a junior under a new coaching staff headed by Jake Shrum and proceeded to finish second in the conference in the 200 individual medley, recorded 23 top 10 finishes and won won five individual events during a season in which she was also named the CAA Female Swimmer of the Week once.

“Out of a horrible thing that happened (at TU), a great thing happened,” she said. “I would give a full recommendation for anyone who wants to swim for Coach Shrum.”

Krumenacker spends less time in the pool these days, although it’s not just because she is burned out or because she suffered a torn labrum her senior year with the Tigers.

She is currently studying to earn a second undergraduate nursing degree from TU next December, and will undoubtedly apply her consummate team-building skills toward a greater — and much needed — cause.