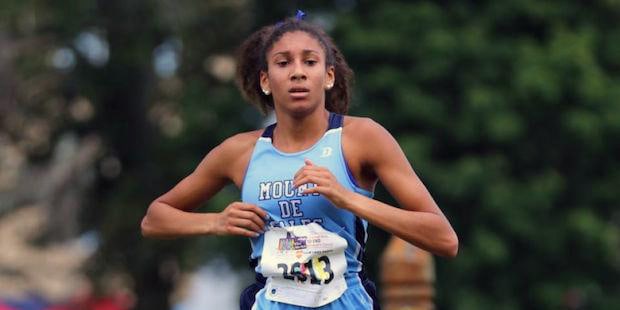 Last fall as a sophomore at Mount de Sales, she finished 13th in the Foot Locker Cross National Championships, ran the season’s fastest three-mile time by a Maryland girl and was named the 2019 Gatorade Maryland Cross Country Runner of the Year.

With a resume to best most four-year careers, Whittaker is Varsity Sports Network’s No. 3 Girls Cross Country Runner of the Decade. 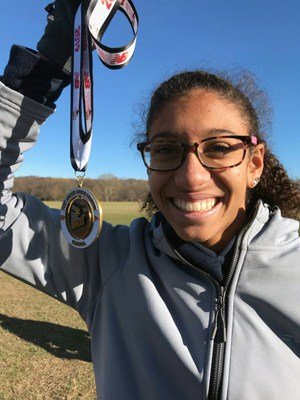 At the Foot Locker nationals in San Diego’s Balboa Park on Dec. 14, Whittaker ran 17:48.8 on the 5K course. Her 13th-place finish earned All-America honors. Two weeks earlier, she qualified for the national race with a seventh-place finish in 17:56.90 at the Northeast Regional in New York City’s Van Cortlandt Park.

Whittaker said she trained to peak for those races.

“I just kind of had that goal in mind the whole cross country season,” she said. “We just worked really hard to get there and it definitely paid off and I was really happy.”

Whittaker, 16, already has won two IAAM A Conference championships and two Maryland/D.C. Private Schools Championships. Last fall, she beat her closest A Conference rival by almost a minute and a half to repeat, but she finished second overall to C Conference winner Storrie Kulynych-Irvin, from Key School.

According to Milesplit.com, she ran the fastest three-mile time by a Maryland girl, 17:23.8 at the Seahawk XC Invitational and she ran the second fastest 5,000 meters, 17:16.00, at the Paul Short Run at Lehigh University. She also won the elite division at the Bull Run Invitational in 18:26.00, faster than three of last fall’s four public school state champions.

“Last fall, we really tried to find the top cross country races for her, because she’s at the level where she needs the best competition. It pulls her out,” Mount de Sales coach Steve Weber said. “If somebody is stronger, let Juliette run against them once and she’ll learn… She studies. She’ll plan and when she makes a move, it’s almost never countered. That’s the mark of a champion ultimately.”

With a swimming background, Whittaker ran a little bit of cross country in middle school, but she wasn’t serious until she arrived at Mount de Sales. Her parents both ran at Georgetown and she is the youngest of four children, three of whom run.

“I was kind of losing my love for swimming. I had been doing it so long,” Whittaker said. “My brother (Alex) ran cross country and track in high school. I was going to his meets and I kind of just fell in love with it and then my sister (Bella) started doing it when she came to Mount de Sales. I really wanted to try this, but I couldn’t do both sports, so I made the decision to switch over and I’m really happy that I did.”

As a freshman, she finished fourth at the Seahawk Invitational and at the Bull Run and was second in the Barnhart Invitational.

Weber said the aerobic base built from years of swimming along with an efficient running style helped Whittaker excel quickly. 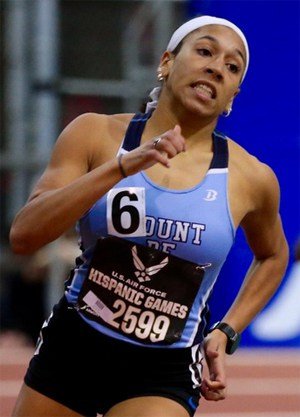 In addition to her prowess as a cross country runner, Whittaker has emerged as one of the area’s top distance runners in indoor and outdoor track.

She’s also exceptionally versatile. During this past indoor season, she ran the fastest times by a high school girl in the United States in the 800 meters (2:03.01) and in the 1,000 meters (2:45.49), according to milesplit.com.

Her father Paul Whittaker, who ran middle distance events at Georgetown, said she already understands how to train and how to compete.

“She’s really driven,” he said, “and I told her the other day, ‘You’ve now matured into what I would call an elite track athlete,’ because she gets it. I told her once she’d gotten it, it’s going to be easy to coach her. I’m giving her mileage goals each week, but I’ve gotten away from telling her what she needs to do. She now goes out and does her tempo runs on her own, does hill workouts on her own.”

As a runner, Juliette Whittaker said, she’s able to continue her usual training despite the COVID-19 pandemic. Although she would prefer to be racing in the coming weeks, she shouldn’t lose any ground when cross country or track resume.

While she plans to run in college like her brother and sister, Alex at Yale and Bella, who will be a freshman at Penn, but she’s starting to think beyond that. Weber believes she could be an Olympian.

“I obviously thought it would be cool,” she said, “but I never had much faith I’d be able to qualify for the trials, but definitely more and more I’m thinking about the Olympics and also about placing well in college and possibly going pro. Those are my goals. I don’t know if I’ll get them, but I can dream.”

And, with two high school seasons to go (pandemic willing), Whittaker still has time to make a case for being among VSN’s greatest cross country runners of the next decade, as well.