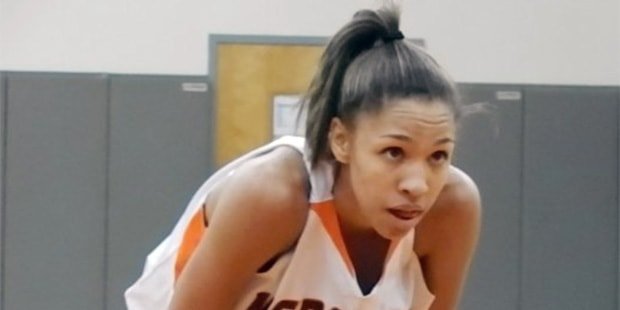 Danielle Edwards excelled as the point guard who made McDonogh’s offense hum, but she also had the defensive ability to throw the opposition’s offense completely out of whack.

Varsity Sports Network’s No. 3 Girls Basketball Guard of the Decade, Edwards led the Eagles to three IAAM A Conference championships and she still holds school records for assists (500) and steals (614).

She also led the Eagles to back-to-back championships at the Bishop Walsh Invitational, which draws the best private and parochial school teams from the Baltimore-Washington area. Both times, she earned Best Defensive Player and had the most assists and the most steals in the tournament.

“She’s the one piece they cannot do without, because she can make their offense go by how well she plays defense,” then-Roland Park coach Scott Buckley told The Baltimore Sun in 2014.

Following her career at McDonogh, Danielle Edwards started 123 consecutive games in the ACC at Clemson University, where she became the third player in program history to score more than 1,000 points, with with at least 300 assists and 250 steals.

Varsity Sports Network and The Baltimore Sun named Edwards Player of the Year as a junior in 2014 when she led the Eagles to a 29-2 season and a sweep of A Conference opponents. She came back the following year to lead McDonogh to another A Conference championship, Bishop Walsh championship and No. 1 ranking.

A four-time Baltimore Sun All-Metro selection, including three times first team, she finished her career with 1,389 points, but Edwards, who went on to be a two-time ACC All-Defensive team selection at Clemson, never relied on her offense.

“When you’re 5-6, you’ve got to figure out a way to impact the game,” she said, “and obviously, I’m pretty quick, so I just would use that to my advantage when I was growing up. I was always told if I made a mistake offensively to make up for it on the defensive end and that just stuck with me.”

As a senior, she averaged 11.9 points, 5.4 assists and 4.8 steals. In the A Conference tournament semifinal, she had 14 points, five steals and six assists and played the major role in forcing most of St. Frances’ 28 turnovers in a 57-41 victory. In the title game, a 59-52 overtime win against Roland Park, she scored 15 points and made a critical off-ball play.

With the Reds leading, 50-47, Edwards set the pick for Kolbi Green to shoot a 3-pointer as time expired in regulation. Green was fouled and hit all three free throws to force overtime.

As a freshman, Edwards also set the pick for Tiersa Winder’s game-winning 3-point shot as the Eagles rallied from 22 points down at the half to beat Archbishop Spalding, 46-44, for McDonogh’s first IAAM basketball championship.

“I believe the ball was almost at half court,” Edwards said, “and I was on the ball side block. My job was to set that screen for Tiersa to come to the ball-side corner and that’s all I was focused on. He (coach Brad Rees) told me to set the screen and I had to get my shooter open and the crazy thing is my senior year when Kolbi Green hit those three free throws, we were in that same exact play.”

Despite all the titles and accolades that came afterwards, Edwards said winning that first championship is her favorite high school basketball memory.
“I remember at the end of the game, the buzzer went off and I was like in shock that we came back, down by 20. If you look at the video, I just pause for a second like, ‘Did that really just happen?’ Then I ran to my teammates.”

For Rees, nothing Edwards did surprised him. He knew he could count on her leadership and her instincts to do whatever was needed in the moment.

“She had this unique will to win that very few players have,” Rees said, “and it manifested itself not only in her play on the court but in her preparation to play. She was not always the most popular person on the team at practices, but she would drive everyone else to get to that level. She made everyone around her better by not only her play on the court but her work ethic during practices too.”

To Edwards, that was just her job as the point guard.

“I learned that early. I’ve always been a point guard,” she said. “Coach Brad and coach Amy Brooks gave me the go-ahead to be that leader, so that helped a lot. And then when you have seniors — my freshman year I had Marin Kobb; Hannah Rees, who was a junior; Taylor Cummings; Tiersa Winder — when you have people like that who set the standard, set the example, it was pretty easy for me to follow their footsteps and to expect that from the rest of my teammates as well.”

As Clemson’s point guard, she started all 123 games over four years, a program record. She became only the third player in Clemson history to collect at least 1,000 career points, 300 career assists and 250 career steals.

Edwards grew up in a basketball family and started to play at 3 or 4. She’s making the sport a career as the director of player personnel for Michigan’s women’s basketball program.

Her father, Darryle Edwards, played at Calvert Hall and at Mount St. Mary’s, where her mother Jan also played basketball. Her twin brother Drew, an All-Metro player at Calvert Hall, played at Providence and at Charlotte.

After Clemson, she tried playing overseas but lasted only a week in Luxembourg. A self-described neat freak who likes everything planned out, she said there were “too many unknowns” for her. A couple months later, in November 2019, she got the Michigan job which suits her perfectly.

Still, her ultimate goal is to coach.

“As a point guard, I feel like that’s always in my blood and I’m always looking to help out or lead or teach in some way, so coaching is definitely down my path. Obviously, everyone’s path is different so I don’t know how I’m going to get there, but I would love to continue to be on someone’s staff and have an impact on players lives just like my coaches did to me.”