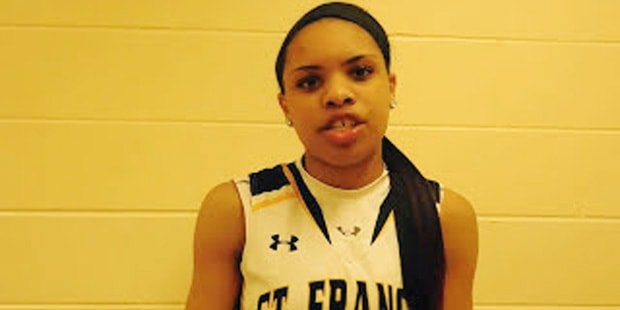 Mia Davis didn’t start playing basketball until the fifth grade and St. Frances coach Jerome Shelton believes that late start taught her to compete on every play — a lesson that helped her emerge as a powerhouse rebounder.

An intimidating presence on the boards, the 6-foot Davis played much taller, challenging for every rebound and often out-dueling taller girls at the rim throughout her Panthers’ career.

“I definitely jumped into the game late,” Davis said, “so with everybody else’s experience, I just thought working hard would get me on the floor… I knew everybody else had more skill and played a lot of years before me, so that was the No. 1 thing — work hard and everything else will come.”

VSN’s No. 3 Girls Basketball Forward of the Decade, Davis earned Player of the Year honors from Varsity Sports Network and The Baltimore Sun after averaging 14 points and 10 rebounds as a senior. She led the No. 1 Panthers to the best season in program history with a 30-1 record and a ranking as high as No. 10 in USA Today’s Super 25. 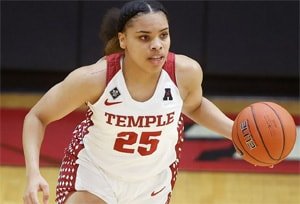 Now a senior at Temple University, Mia Davis continues to shine on the basketball court. She was an honorable mention All-American as a junior when she had 18 double-doubles. As a senior she is averaging 18.4 4 points and 7.8 rebounds per game.

Davis, an All-American last season at Temple, never played a bad game at St. Frances. She cleaned up on the boards and consistently made the kinds of critical plays that didn’t make headlines. That never bothered her.

“Games are going to be like that,” Davis said. “They do something at the end that makes the headline but you don’t really see all the work that goes on behind it, but I just enjoy the moment, enjoy my teammates, doing whatever I have to do to get a win. I’m not too big on highs and not too low on lows… As long as we’re winning, that’s all I care about, just winning, playing as a team, being happy for others, just being a great teammate.”

Davis, who transferred to St. Frances after helping Dunbar reach the state semifinals as a freshman, finished her high school career with 1,744 points and more than 1,000 rebounds.

“To me, it’s the way she rebounds, and rebounding to me is a mentality,” Roland Park coach Scott Buckley told The Baltimore Sun in 2017. “She has good position, but more than that, she likes to go after the ball. There are a lot of rebounders who wait for the ball to come to them, but she doesn’t. What makes St. Frances better is that they can take some chances on the offensive end and Mia can make up for some mistakes and give them second and third chances.”

In leading the Panthers to their second straight IAAM A Conference championship her senior year, Davis scored 13 points and had eight rebounds in a 56-47 title-game win over No. 2 McDonogh. She scored seven points in the first quarter to keep the Panthers from falling too far behind.

A few weeks later, Davis earned Most Valuable Player honors at the Bishop Walsh Tournament after leading St. Frances to its first tournament title since 2010.

In another highlight of her senior year, Davis scored 21 points in a 75-74 overtime win against National Christian Academy, the No 3 team in the Washington, D.C. area. Nia Clouden’s 3-pointer at the buzzer sealed the win, but Davis scored seven points in the fourth quarter to keep the Panthers from losing in regulation.

That victory polished off the Panthers’ first undefeated regular season and Shelton gave Davis a lot of credit for all of the accomplishments of her senior year.

“Mia Davis was the heart and soul of that team,” Shelton said. “We don’t get to New York or play on (national) television without her leadership.”

The win over National Christian helped the Panthers earn a bid to the DICK’S Sporting Goods High School National Championships in New York City which was shown on ESPNU.

Facing Hamilton Heights (Tenn.) in the national semifinals, Davis had 13 points and 13 rebounds and the Panthers rallied from 13-points down in the second half but ended up falling short, 56-55.

Davis said that entire season, with 30 wins and the opportunity to play at nationals, was her favorite memory of high school basketball. She couldn’t pick just one moment.

She has started every game of her college career. A two-time All-American Athletic Conference selection, she has 1,773 career points and 935 rebounds. Those totals put her fifth in points and fourth in rebounds on the Owls’ all-time lists.

As a junior, she had 18 double-doubles, sixth-most in Division I. This season, she averages 18.4 points and 7.8 rebounds.

“Mia Davis has to be one of the hardest working players I’ve ever coached,” Shelton said. “Her practice habits were just as good and her work habits in games. She just was relentless in her preparation. She understood what her role was and she never took a play off. That was just Mia Davis. That’s how she plays at Temple. She’s straightforward. Every play, she plays with the same amount of energy and enthusiasm and hustle.”

Davis will graduate this spring with a degree in criminal justice. She plans a career in law enforcement, but she would also like to play professionally in the WNBA or overseas.

She might return to Temple for another year after the NCAA granted an extra year of eligibility because of COVID-19, but she said she hasn’t thought about that yet.

“I may come back to school and do another year,” she said, “but I’ve just been living in the moment, because we never know when we’re going to get cancelled, when we’re not going to play, so I really haven’t been thinking about it. I’ve just been playing games as of right now, giving it my all.”