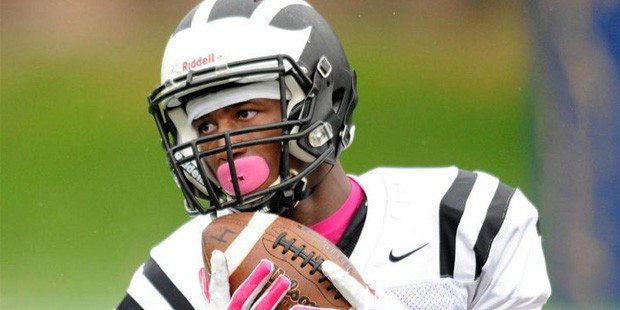 Even though Deonte Harris is credited for rushing for 933 yards on 86 carries with 18 touchdowns his junior year, the 2013 season was an unfortunate one for Archbishop Curley High School’s football team — especially against St. Paul’s School. 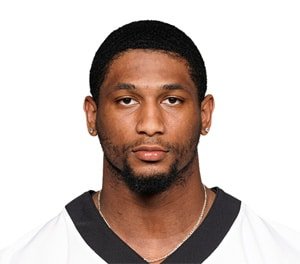 After an All-Pro rookie season as a kick returner with the New Orleans Saints, Deonte Harris has worked himself into a role in the Saints’ passing game, having already caught a touchdown pass from future Hall of Famer Drew Brees.

The Friars fell to the Crusaders, 19-14, in the final seconds of the Maryland Interscholastic Athletic Association B Conference title game after also bowing in the regular season encounter.

A year later, Harris, VSN’s No. 3 Football Athlete of the Decade, changed that paradigm in a hurry.

The first time the teams met in 2014, Harris demolished St. Paul’s defense with a spectacular display of speed and elusiveness, rushing 17 times for 232 yards and a pair of touchdowns.

In what would become his calling card at Division II Assumption College and with the New Orleans Saints in the NFL, he also returned a kickoff 85 yards for a touchdown.

Showing his versatility, Harris added a 17-yard half-back option pass to teammate Tyshawn Williams for another score in the 38-14 triumph that snapped a four-game losing streak to St. Paul’s.

The best — or worst, for Crusader fans — was yet to come from Harris, who rushed for 211 yards and four TDs while adding a fifth score on a 68-yard touchdown pass in the championship game rout of St. Paul’s.

Harris didn’t just pester B Conference rivals, mind you. He also picked on Loyola Blakefield of the A Conference by compiling 206 total yards (140 rushing, 66 receiving) with two touchdowns in a 28-0 pasting of the Dons.

The 5-foot-6, 170-pound burner finished his senior campaign with 1,442 yards and 20 touchdowns on just 130 carries for a gaudy 11.9 yards-per-attempt average and totaled 2,030 yards and 25 touchdowns for the 10-0 Friars, who claimed their first B Conference banner since sharing the crown with St. Paul’s and Severn School in 2003.

While major college scouts seemed unimpressed by Harris’ numbers, it appears likely that his lack of size was the major sticking point in that regard.

Assumption College, however, did not make that mistake.

And Harris decided to use the snub as a springboard to success.

“I just took it as motivation,” Harris told ESPN.com last year. “I knew somebody was gonna give me an opportunity. And once I got that opportunity, I just ran with it. Ever since I was little, I’ve always been small. So guys have always counted me out because of that. I got used to it as I grew up.

“But I always kept that chip on my shoulder, and every time I go out to practice or go to play, I always feel like I’ve got something to prove.”

VSN’s 2014 Offensive Player of the Year made an immediate impact at the small, private, Catholic college in Worcester, Mass. by being named the 2015 Northeast-10 Conference Rookie of the Year and was selected for the New England Football Writers Division II/III All-New England Team while being the team’s leading receiver with 82 receptions, 824 receiving yards and nine touchdowns.

Moreover, he averaged 28.2 yards per kick return with three scores, including an 87-yard kickoff return for a TD.

As a sophomore, Harris grabbed 42 passes for 512 yards and three touchdowns, rushed just eight times for 93 yards, ran for 109 yards on 10 punt returns and returned 15 kickoffs for 464 yards and a score. He was a first-team All-Northeast-10 Conference returner.

In a stellar junior campaign in which he played 13 games, secured 61 passes for 810 yards with eight touchdowns and returned 33 kicks/punts for a combined 1,015 yards and eight touchdowns, he was absolutely dynamic against the University of Findlay in the second round of the NCAA Division II playoffs.

He was an American Football Coaches Association Second-Team All-American in his final year with the Greyhounds, and finished his career with school records in TDs (45), all-purpose yards (6,173), combined total touchdowns on kick returns (14) and single-season kick returns (8), single-season punt return touchdowns (5) and career punt return TDs (8).

Even with all those accomplishments, no team bothered to pick him in the 2019 NFL Draft, leaving him as a free agent signee with the New Orleans Saints. Harris was one of just 49 Division II alums to claim one of the 1,696 spots on 2019 rosters at the beginning of the NFL campaign.

The Saints have been paid back handsomely for their due diligence in finding a diamond in the rough from the Division II college ranks, starting with a scintillating 53-yard punt return with 12:06 left in the first quarter of a 33-27 triumph at Seattle in his third NFL contest.

The Big Easy’s small dynamo ended up leading the NFL with 36 punt returns for 338 yards and a touchdown. He also had a 26.8-yard kickoff return average while garnering First Team All-Pro honors by the Associated Press, Pro Football Writers, Pro Football Focus and Sporting News.

So far this season, Harris has 120 receiving yards and scored a touchdown for the NFC South squad.