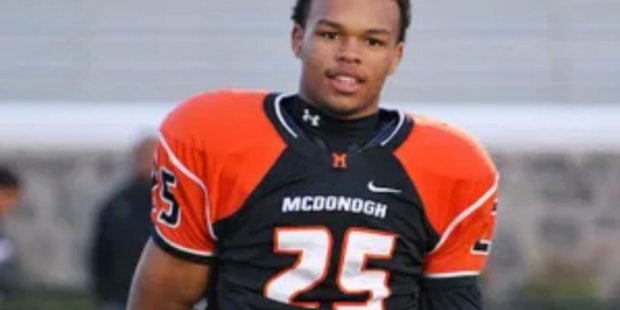 Eric Burrell’s first collegiate start was in front of 100,000 fans. The former McDonogh School standout’s final season at the University of Wisconsin was witnessed by few, in-person, because of COVID-19 restrictions.

Burrell, VSN’s No. 3 Football Defensive Back of the Decade, has been a source of stability in a roller coaster season for the Big 10 Conference power.

“Eric Burrell has proven consistency and play-making ability for us,” said Wisconsin defensive coordinator Jim Leonhard, who played for the Baltimore Ravens.

Burrell, a red-shirt senior safety, has 18 tackles (15 solo), an interception and two pass breakups for the Badgers (3-3 overall).

The Badgers lost several games due to COVID-19 protocols by the Big 10. The league originally cancelled the 2020 season in August, but school presidents reconsidered and the season started in late October.

Burrell said it was tough watching other Power 5 teams on the field in September.

“My friends that I grew up with, they’re playing and I’m communicating with them like, ‘Man, what protocol are y’all doing?’” said Burrell. “Nobody knows (what will happen), but all I know is we get an opportunity. I think we’ve figured out safe protocols to do so … but you’ve got to take it day-by-day.”

Eric Burrell has had a nose for the football during his standout career at the University of Wisconsin. The former McDonogh School star and Badger senior co-captain has five interceptions, four forced fumbles and two fumble recoveries for the Big 10 Conference power.

Though playing a limited schedule, Burrell, a co-captain, is getting a final chance to show he’s one of the top defensive backs in the nation. Last year, he led Wisconsin with three interceptions and placed second in pass breakups (six).

Burrell, a resident of Severn, is a candidate for the Jim Thorpe Award as the nation’s top defensive back. Pro Football Focus rated him as the top returning player in the Big 10.

Burrell was a three-star recruit by Rivals as a senior at McDonogh in 2015. He had 48 tackles, three interceptions, and four fumble recoveries, earning first-team All-Met, MIAA A Conference and consensus All-State honors.

His breakout was in 2014 with 42 tackles and three interceptions. His fumble recovery in overtime secured victory for the Eagles over Gilman School in their annual season-ending rivalry match, and a share of the MIAA A title. 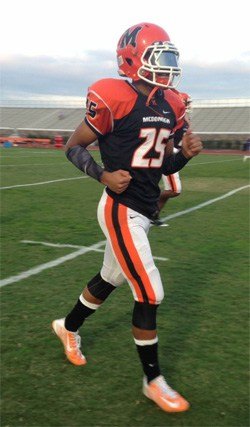 A little learner than he is in college, Eric Burrell was still a take-away machine in high school, recording three interceptions and four fumble recoveries as a senior at McDonogh School.

“He’s a true football player,” Damico said. “He’s aggressive. He’s a good tackler. Most defensive coaches like aggressive-tackling safeties and I think that’s what separates him. He’s a skill guy who can tackle, and everyone’s looking for those guys.”

Burrell played alongside Jordan McNair, who went on to Maryland. The linemen died in the spring of 2018 from heatstroke.

McNair, who would have been a red-shirt senior this season, collapsed during a workout.

Despite a late offer to become McNair’s teammate at Maryland, Burrell honored his commitment to Wisconsin (gave verbal in October 2015). After being red-shirted after an shoulder injury in his freshman season, Burrell was a steady contributor in his red-shirt freshman and sophomore campaigns.

Burrell became a starter at safety in 2019 after teammate Scott Nelson went down to a season-ending injury in the regular season opener. Burrell finished with 55 tackles, three interceptions, two fumble recoveries and two forced fumbles.

In his final regular season game Saturday, Burrell had an interception as Wisconsin defeated Minnesota, 20-17, in overtime. He carried the Paul Bunyan Axe as he and his teammates ran around Camp Randall Stadium in celebration.

“Being a Badger has shown me how to create lasting, meaningful relationships,” said Burrell, who will play his final game for Wisconsin in the Duke’s Mayo Bowl against Wake Forest, Dec. 30 in Charlotte. “The people I have met here will continue to be in my life long after I leave Madison. I am thankful that I had the opportunity to be a Badger.”