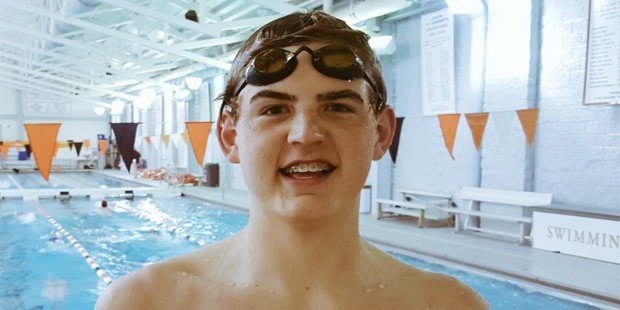 Although his senior season is likely to be wiped out by the coronavirus pandemic, Colin Bitz has already built enough of a reputation for excellence to be selected as VSN’s No. 3 Boys Swimmer of the Decade for his stellar performances in his first three campaigns at McDonogh School.

After all, with the University of Virginia signee leading the way, the Eagles have broken Loyola Blakefield’s grip on the Maryland Interscholastic Athletic Association A Conference and put their own stranglehold on the championship after last February’s three-peat.

Colin Bitz is hoping to compete for McDonogh School one more time, but regardless of whether the Eagles are able to get in the pool for his senior year he will be swimming for the University of Virginia next year.

The competition was keener in the same 200 medley relay a year earlier when the then-sophomore star and Sukeena, Justin Nguyen and Ben Merz propelled the Eagles (1:34.37) past the Dons (1:34.54) to help subdue Loyola, 515-495, at the Owings Mills School’s Rosenberg Aquatic Center to cap the program’s first unbeaten season.

“We had slipped behind a little more than we had hoped,” McDonogh coach Scott Ward said after the meet. “We had to respond. That was a really good swim for Colin.”

The team captain helped out some more in a meet in which every placement mattered by finishing fourth in the 500 freestyle and then claiming a win in the 100 backstroke (49.29) as the Eagles began to pull away.

As a member of the second-place 400 freestyle foursome, Bitz did his part to secure the hard-earned victory.

“(We) went out with heart,” Bitz said after the meet “Being a captain is honor enough, especially in a year when we went undefeated and also beat Peddie (School).”

Even with all of those accomplishments, Bitz said that the favorite moment of his high school career was when McDonogh topped Loyola for the 2018 A Conference crown.

As a freshman phenom, he contributed mightily toward vaulting his team over Loyola in the championship meet for the first time since the 2011-12 campaign as the Eagles spoiled Loyola coach Keith Schertle’s return to the helm by narrowly dunking the Dons, 480-474.

The Eagles pulled to within 401-397 when Bitz snagged the 100 backstroke (50.01) and eventually moved ahead of Loyola before the 400 freestyle relay

With the Eagles on the verge of a win, all they needed was a good showing in the 400 to knock off the Dons.

Bitz and his buddies turned in a respectable 3:13.80 to secure McDonogh’s second-place points and the program’s second title since 1939 when it was in the Maryland Scholastic Association.

“Giving our seniors their first MIAA championship — to finally finish on top — was really a special moment,” Bitz said.

Ward said that Bitz was a “game changer” from the moment he swam his first high school meet.

While Bitz said that he would probably specialize in the IM, backstroke and butterfly at UVa, Ward was able to use him in almost any event.

By age seven, Bitz had mastered every stroke and was placing high in state meets when he was 10.

Even though he came from a long line of lacrosse players, including his mother, Margaret, two aunts and three uncles, who played in high school and college, Bitz was sold on swimming.

“Making the decision (to give up lacrosse) was a pretty simple choice for me,” he said. “In all honesty, the pool has always been my happy place.”

Because rigorous training in the pool typically pays off with good results, it’s easy to see why Bitz was drawn to the sport.

“There are times when it can be tough when you’re up at 4 a.m. (for an early workout),” he said. “But I still usually wake up with a smile on my face.”

Having, like many other athletes, to put his workout regimen on hold for nearly three months last spring during the shutdown, Bitz said that he lost some “strength and brain-wiring” during the hiatus.

Nevertheless, even if the MIAA season does not happen, Bitz has put in as much as 45,000 to 50,000 yards per week in “a good aerobic training block” to keep his happy place filled with joy.