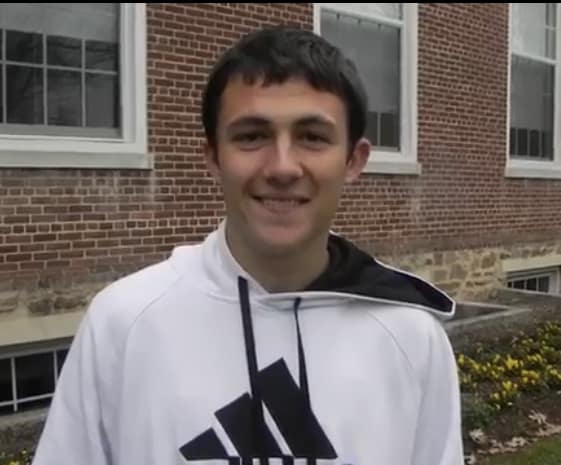 Talent and determination are often traits of an elite soccer player.

A shovel, sometimes, helps as well.

Mike Gamble remembered removing snow from his driveway so he could practice.

“It was snowing pretty hard and my parents got worryied and had to go find me,” laughed Gamble, who played for McDonogh School. “My dad wasn’t happy with me.”

“When it’s a snowstorm, you’re pretty sure people are at home drinking hot chocolate,” said Gamble. “I was out shoveling snow to have a few inches to train on.”

It paid dividends on the pitch for Gamble, VSN’s Boys Player of the Year in 2011. He posted 35 goals and 16 assists, leading McDonogh to the MIAA A Conference championship.

The 35 goals were the most by an Eagle player since Kaiser Chowdry’s epic 2000 senior season where he set the MIAA A mark with 45 tallies.

Former longtime McDonogh coach Steve Nichols said Gamble was the best scorer he coached at the Owings Mills private school since Chris Agorsor, who played for the University of Virginia and professionally after a decorated All-Met career in the mid-2000s.

“He works so hard. He was so determined to be successful,” said Nichols, who left McDonogh in 2014 to become men’s coach at his alma-mater, Loyola University. “It’s hard to find kids like that. He had this desire.”

“If there’s 20 inches on snow, he’s climbing the monkey bars,” said Quaranta, who was an Eagle assistant when Gamble played. “He runs at defenders for 90 minutes until they drop. There’s no quit.”

After starring at McDonogh School and Wake Forest University, Mike Gamble is in his second season with the Loudon United of the USL. He was VSN’s Boys Soccer Player of the Year in 2011.

Gamble, who played for the national-title winning Baltimore Bays on the club circuit, was an impact performer for McDonogh after transferring from Glenelg Country School. He accrued 27 goals and 16 assists as the Eagles reached the MIAA A final.

“I came in unknown and was able to get off to a pretty hot start,” said Gamble, who had several four-goal performances, “I was man-marked in the second half and teams got more physical. It was a good learning year.”

With his high-level experience on the youth circuit (played on Under-15, 17 and 18 national team), Gamble resisted professional opportunities to finish his high school career. He had a direct hand in 51 of the Eagles’ 77 goals in 2011.

Gamble understood there was no cutting corners in the MIAA A.

“There are some of the best players in the country and to get to measure yourself against the best. It motivated you to do better,” said Gamble. “I was never satisfied. I was always looking for more.”

After earning a second straight State Player of the Year honor by the Maryland Association of Coaches of Soccer (MACS) as well another first-team All-America nod from the National Soccer Coaches Association of America (then-NSCAA, now United Soccer Coaches), Gamble took his talents to the Atlantic Coast Conference and Wake Forest.

He was selected to the ACC’s All-Freshman team in 2012, and was first- and second-team in his junior and senior seasons, respectively. Gamble currently stands tied for 10th in career points (68) for the Demon Deacons.

“It was the first time I learned what soccer is really about,” said Gamble, who was slowed by injuries in his sophomore season.

In 2016, Gamble was drafted by the New England Revolution in the second round of Major League Soccer’s SuperDraft. He was released midway through the 2016 regular season.

Training and injuries had taken its toll and Gamble decided to take a break from soccer. He returned in 2018, joining the Tulsa Roughnecks of United Soccer League. Gamble totaled three goals and two assists in 30 matches (24 starts).

He moved to South America for an opportunity with Deportes Santa Cruz (Chilean Primera Division B) in 2019. In January, Gamble returned to the states as Loudoun United of the USL acquired his services.

Now 26, Gamble’s passion still burns as it did when he was teenager, shoveling snow to practice.

“I love playing this game more than anything and hope to keep doing it for a long time,” said Gamble, who lives in Northern Virginia. “That grind, that relentlessness, the adversity, it’s excites me… it gives me a chance to show who I am as a person and a soccer player.”