10 YEARS OF EXCELLENCE: VSN’S NO. 3 BOYS LACROSSE MIDFIELDER OF THE DECADE 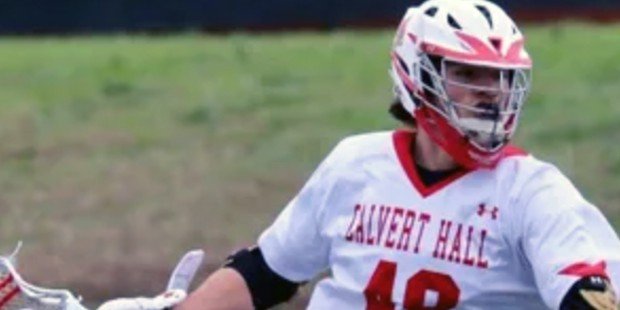 A standout performance in Calvert Hall’s 33-10 victory over archival Loyola Blakefield in the much-anticipated 100th Turkey Bowl, in which Cole Herbert caught a 32-yard touchdown pass, ran for two other scores and even recovered a fumble as a defensive back, wasn’t enough.

Herbert then had a golden opportunity to help lead the Cardinals to a fourth consecutive MIAA A Conference lacrosse title the following spring.

When the lacrosse season was halted after a couple of games due to the COVID-19 pandemic, Herbert and his teammates could only dream of what could have been.

His visceral reaction to the abrupt end of his athletic career at Calvert Hall was captured in a Q&A on the website laxnumbers.com.

“At first, the feeling was disbelief: how could this be happening? Then, I was just deeply disappointed that what we had going as a team would be interrupted,” he said. “When we were told there was hope we would get a chance to play again, we stayed in shape and were looking to get back on a field, any field. Then the season was canceled, and it was final. A deep sense of missing something that we would never get back set in.”

Even so, VSN’s No.3 Boys Lacrosse Midfielder of the Decade had plenty of good memories from his first three stick campaigns that produced a 50-6 overall record, a stellar 34-2 mark against A Conference foes and an unprecedented three-peat for the Cardinals.

His many contributions to Calvert Hall’s lacrosse success started his freshman year when he scored a goal and added an assist in a 12-6 triumph over McDonogh School in the A Conference final.

He finished with 10 goals and eight assists as a rookie playing on a talented team that also featured senior Brendan Curry, an eventual two-time All-America selection at Syracuse, and sophomore Grant Mitchell, who would earn VSN Player of the Year honors the following season.

Herbert was named to the Baltimore Sun’s 2018 Second Team All-Metro squad after totaling 30 goals and 19 assists his sophomore campaign, as the Cardinals rolled to another title by edging Boys’ Latin, 10-8, in the title game — still one of his favorite moments.

“All three championships were special, but that one was extra special,” he said, alluding to the death earlier in the year of assistant coach Dave Huntley and the passing of teammate Peter Ilardo’s dad a couple of days before the final.

Ilardo, used mainly on extra-man situations, scored a goal against the Lakers that night.

“I have never felt so much joy and happiness than to play for my brothers and best friends — and use my skill to bring another championship, as well (to do it) for Coach Huntley and Mr. Ilardo.”

Herbert’s season had started strong with a three-goal, one-assist effort in an 11-7 decision over Gilman School in the conference opener and he closed the regular season with the same totals in a key 10-4 victory over Loyola that earned the Cards a playoff bye.

Herbert added four more points on two goals and a pair of assists in a 15-9 verdict over the Dons in a semifinal a couple of days later.

Despite those gaudy numbers, the best was yet to come for Herbert in both sports as he entered his junior year.

Herbert still was mulling football offers from Rutgers University and the Air Force Academy before his junior lacrosse season, although he had committed to the University of North Carolina to play lacrosse for Loyola grad Joe Breschi as an eighth-grader.

“Coach Breschi and I talk all of the time, and he’s been very supportive. I’m not leaning one way or the other right now,” Herbert told VSN in March of 2019. “I’ll just have to see what my final options are before I decide.”

That spring, Herbert’s all-around game was on display as he sacrificed scoring (16 goals) while deferring to his teammates (39 assists, 42 ground balls) and continuing to show his trademark defensive and riding skills.

He finished the season with two goals and three assists in a 15-7 verdict over St. Mary’s in the A Conference final.

He won the C. Markland Kelly Award as the best player in the state, was the Baltimore Sun Co-Player of the Year (with VSN’s No. 2 Boys Lacrosse Defensive Player of the Year BJ Burlace) and earned a spot on the Team USA U19 training team (with CHC teammates Connor and Grant Mitchell and Jake Snyder; Burlace, Boys’ Latin’s Brendan Grimes and Jackson Bonitz of McDonogh were the other local selectees).

The skill it takes to play football at such a high level certainly aided and abetted Herbert on the lacrosse field.

“The movements are similar (in both sports),” he said. “But in football when I’m running a route, I know where I’m going. In lacrosse, I play it by ear.”

Once Herbert opted to play lacrosse in college, he was all in.

He finished his freshman year with the Tar Heels by garnering more playing time as the season progressed, scoring four goals and adding as many assists with four starts on the first midfield line.

Herbert left a lasting legacy at Calvert Hall, one he hopes will filter down through the years to upcoming players.

“I wanted to compete at a high level every game,” he told lax numbers.com. “Personal statistics never mattered. At the Hall, the team and the process are everything. I (and we) wanted to leave everything on the field, and most of the time, it worked our way. We wanted to play the ‘Calvert Hall Way’ every game; ride hard, pressure, transition offense, and move the ball to the open man at all times. It doesn’t matter who scores. Just dominate.”