10 YEARS OF EXCELLENCE: VSN’S NO. 3 BOYS LACROSSE DEFENSIVE PLAYER OF THE DECADE 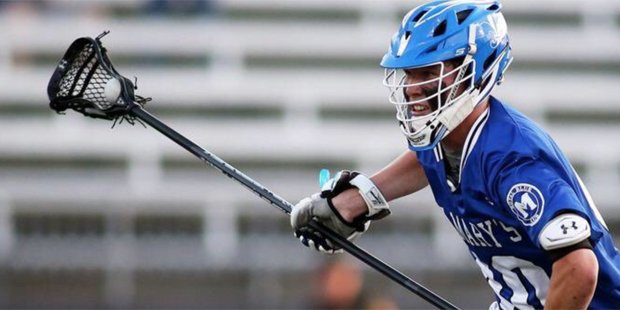 by Nelson Coffin
He played with a freewheeling and fast-paced style, motoring quickly forward from the defensive end of the field to create instant offense.
BJ Burlace, VSN’s No. 3 Boys Lacrosse Defensive Player of the Decade, wielded a lethal long-stick that was as adept at preventing goals as it was scoring them during a four-year career for St. Mary’s High School.

BJ Burlace began his college lacrosse career at Yale University, but will play at the University of Maryland in 2021, along with his brother Colin and former St. Mary’s teammate Alex Wicks.

That was never more true than in his senior year when he produced a whopping 12 goals and 10 assists for the Saints, who were MIAA A Conference runners-up in 2019.
He also earned his defensive stripes by causing 21 turnovers and scooping up 71 ground balls that season.
“We made a lot of transition (plays),” said Burlace, who originally committed to Yale before transferring to Maryland for the 2021 season.
Burlace said that he has fond memories of playing on a defensive unit with one of his best friends, short-stick midfielder Alex Wicks (and current Terp teammate).
The smaller Wicks had the quicks to stay with Burlace, who ran very well for a 6-foot-1, 200 pound athlete with an eagle eye for the enemy net.
Together, they were happy to turn the tables on rival offenses.
“Our goal was to trap their middies on the defensive end,” said Burlace, whose younger brother, Colin, was VSN’s 2021 Defensive Player of the Year. “We got a lot of good looks that way. My strong suit was getting the ball off the ground and turning defense to offense — getting the ball up and out.”
Burlace’s scoring skyrocketed as a senior, he said, because the team was so good that year, a far cry from his freshman year when St. Mary’s notched only one win in 16 games.
“We just had so much more confidence that year,” he said. “And (St. Mary’s) coach (Victor Lilly) kind of turned us loose.”
“You don’t see that in a high school player, the ability to move the ball downfield,” Lilly told VSN in 2019 when BJ Burlace was VSN’s Defensive Player of the Year. “I know I’m not going to replace it.
“He basically played defense for 80 seconds, go down and play offense for 80 seconds, then go back and play defense for another 80. He’s just phenomenal.”
And while Burlace’s final game was not what he and the Saints hoped it would be, he contributed two goals and an assist in the 15-7 setback to Calvert Hall in the title game.
His mentors were many, he said, including Jake Carraway, a standout attackman who was a senior captain at the Annapolis school when Burlace was a freshman.
Moreover, he learned how to play the position from his dad, Brian Burlace, a 1992 First-Team All-America defender for Maryland, the Schmeisser Award winner as the top defenseman in Division I and the current Saints’ defensive coordinator.
“My dad started coaching me when I was three,” he said. “One of the main things he told me was to slow down and focus on the simple stuff. He was harder on me than anyone else, and I needed that. But I always knew I could ask him anything.”
His favorite game, Burlace said, might have been a 15-7 triumph over Archbishop Spalding in his senior year.
“They had been talking some smack,” he said. “We just pumped them out of the gate. It was a lot of fun.”
In another big game for the Saints in 2019, Burlace spearheaded an aggressive defense that blanked Boys’ Latin School for 19 minutes as the Saints rallied for an 11-5 victory in an A Conference semifinal.
His other honors after the season were bestowed by the Washington Post (Player of the Year), Baltimore Sun (Co-Player of the Year) and Capital Gazette (Co-Player of the Year) in addition to earning a spot on the Team USA U19 training team.
Despite all the awards and honors, Burlace said that he’s grateful for all of the help he’s had along the way.
“I’d be nowhere without all of my teammates, coaches, parents, brothers and sister,” he said.
No. 1 Attackman: Shack Stanwick, 2014, Boys’ Latin
No. 2 Attackman: Jacob Kelly, 2018, Calvert Hall
No. 3 Attackman: Jackson Morrill, 2016, McDonogh
No. 4 Attackman: Patrick Kelly, 2012, Calvert Hall