10 YEARS OF EXCELLENCE: VSN’S NO. 3 BOYS LACROSSE ATTACKMAN OF THE DECADE 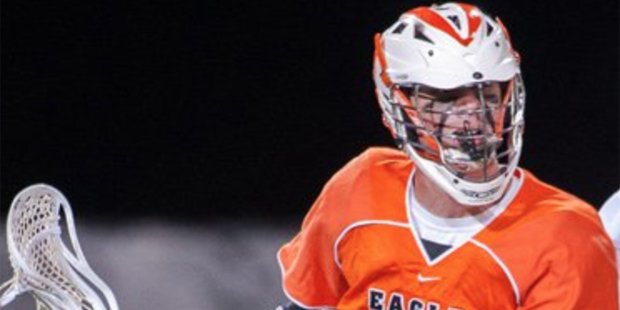 by Nelson Coffin
Attributing all of his lacrosse acumen and ability to favorable genetics is grossly unfair to Jackson Morrill, VSN’s No. 3 Boys Lacrosse Attackman of the Decade.

After four brilliant years at Yale University, including a national championship, Jackson Morrill played a grad year at the University of Denver where he produced 70 points last spring.

Yes, the former McDonogh School star is descended from lacrosse royalty, starting with great-grandfather Kelso Morrill, who played on two national championship teams and coached two others at John Hopkins University.
Bill Morrill, Jackson’s grandfather, was a three-time First Team All-American attackman for the Blue Jays and his dad, Mike Morrill, was also part of two national championship squads at Homewood.
Still, when Jackson was on the field, none of his trio of Lacrosse Hall of Fame ancestors could help him work his magic at being what McDonogh coach called “a phenomenal X attackman.”
“It’s not like they were out there on the field holding my hand,” he said
All of the attributes that make him a great player, he had to do on his own, and he did so at an extraordinarily high level for the Eagles.
And that trend continued during a brilliant collegiate career when Morrill made significant contributions to Yale University’s 2018 NCAA championship team before completing another stellar collegiate season for University of Denver last spring.
Even so, his family ties to the sport cannot be overstated.
“My family definitely had an impact,” Morrill said. “But I try not to lean on it too much.”
Still, Morill noted that not many of his teammates had a father with an elite level background in the sport who could use salt shakers to diagram plays at the dining room table or or break down a certain play on the way home from a game.
It all started at McDonogh where Morrill blossomed after earning his way onto the team as a freshman before receiving a starting nod for the next three seasons, first as a midfielder and then as an attackman for the 2015 and 2016 campaigns.
The Eagles advanced to the MIAA A Conference championship game in both his junior and senior years, bowing to St. Mary’s High School, 13-8, in the 2015 finale before topping Boys’ Latin School, 8-5, a year later to claim the program’s first title since 2005.
McDonogh finished 11-0 in the A Conference that spring and 18-1 overall with Morrill pumping in 43 goals and adding 35 assists.
His versatility, in terms of distributing, riding, scoring, dodging and feeding — you name it — stood out for Hilgartner.
“He just had incredible vision,” the coach said about Morrill’s uncanny knack for making the right play at the right time.
More than anything, Hilgartner added, was how efficiently Morrill ran the offense from his spot behind the goal.
“His quarterbacking skills are absolutely second to none,” he said. “Anything we needed him to do, he could do it. And one of the best things about Jackson is that he didn’t need the ball in his stick to lead the offense.”
Hilgartner then compared Morrill’s talent to ex-Gilman School playmaker Ryan Boyle, who also was an outstanding facilitator on an A Conference championship team and the Ivy League at Princeton University.
Morrill, VSN’s 2016 Boys Lacrosse Player of the Year, said that the Eagles were highly motivated to take the crown that season after falling the year before to the Saints.
“We talked about that loss at the beginning of the year,” said Morrill, who also was a member of the South All-Stars who defeated the North All-Stars, 23-15, in the 2016 Under Armour All-America Lacrosse Senior Game at Johnny Unitas Stadium in Towson. “We were so close to winning (in 2015), but it just wasn’t our night and we didn’t have it. It was so special to win the championship with my buddies from that class the next year. It’s really a nice memory.”
Morrill adapted to the college game quickly at Yale, beginning with a banner freshman year when he totaled 20 goals and 19 assists while starting all 16 games for the Bulldogs. Five of those goals — and an assist — came in his collegiate debut in a 16-11 triumph over Villanova University.
His sophomore campaign in New Haven was even more impressive, considering that he started all 20 contests for the eventual national champions while scoring 40 goals with 32 helpers and a team-best .500 shooting percentage for players with 40 or more shots.
“We were taught not to take ‘iffy’ shots,” he said. “So I wouldn’t shoot unless I was confident it would go in.”
Morrill produced 10 goals and 19 points in the NCAA Tournament, including three goals and five assists in a 20-11 national semifinal victory over Albany and a seven-goal outburst in a 15-13 win over the University of Massachusetts.
The 6-foot-1, 190-pound sharpshooter again displayed his endurance by starting all 19 games for Yale in 2019 while establishing an all-time program points record (94) for a junior.
Morrill, who is second on the Bulldogs’ all-time points list (220), concluded his Ivy League career in the coronavirus-shortened 2020 season by continuing his iron man streak by starting all four contests and compiling 15 points.
Last spring, that streak was kept intact when his graduate student season at Denver included 17 starts in 17 games and a team-leading 70 points.
“Coaches have to take a leap of faith with you when you’re a younger player,” he said. “I fought through some injuries and I feel fortunate that my coaches trusted me enough (to play in every game).”
Morrill recently finished his first professional season in the Premier Lacrosse League by scoring 16 goals with six assists in nine games.
No. 4 Attackman: Patrick Kelly, 2012, Calvert Hall