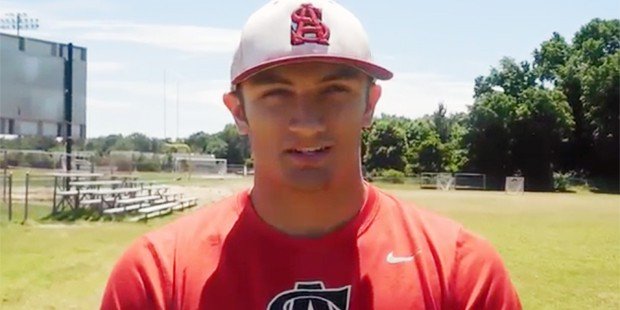 Archbishop Spalding baseball coach Joe Palumbo, now in his ninth year with the Cavaliers, says that centerfielder Billy Godrick was “the competitive heartbeat of our championship teams during his time at Spalding and he has had an impactful college career.”

Palumbo was referring to Godrick’s major role in the Cavaliers’ three consecutive MIAA A Conference titles from 2014 through 2016 and his collegiate career at Fordham University where he led the Rams to the Atlantic 10 Championship and into the NCAA Division I Tournament in 2019. After no 2020 season because of COVID, Godrick enrolled as an undergraduate student at Towson University where he is playing the game he loves this spring. 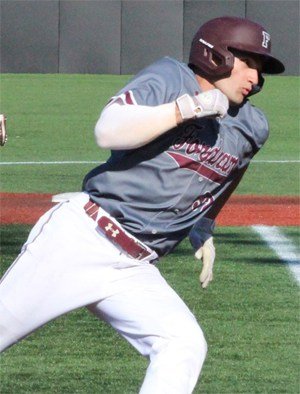 Billy Godrick is currently finishing up his college baseball career as a graduate student at Towson University, after an outstanding four years in the Atlantic 10 Conference at Fordham University.

Godrick has been selected as one of three outfielders on the VSN All-Decade Baseball team (2011-2020) celebrating the web site’s 10-year Anniversary.

A three-year starter in high school and a three time All-MIAA A Conference performer, Godrick’s best season was his last as he was a main cog in the Cavalier’s three-peat as conference champions in 2016, only topped by Calvert Hall’s five in succession (2005 through 2009). Godrick was named VSN’s Co-player of the year with Chesapeake’s Joe Seidler and was named All-Metro by the Baltimore Sun capping his senior season by attaining a lofty goal as he told VSN.

“The seniors before us went out on top, so it was our turn and that was the goal from the very start,” said Godrick, a 5-foot-11, 205-pounder. “The brotherhood extends off the field. Six of us have known each other since we were eight years old. We wanted to win for each other.”

Spalding’s 2016 team was ignited by Godrick at the top, batting .332 as a team and averaged nearly 7.5 runs per game with a batting order that never changed. The Cavaliers ended up ranked No. 1 by VSN in its final Top 20 and No. 13 by USA Today.

Godrick closed his career at Spalding in style, batting .455 with an on-base percentage of .545 and slugging at a .683 clip with four home runs, nine two-baggers, 26 RBI’s as the Cavs’ leadoff batter. He also scored 42 runs, giving him 73 over his last two seasons, and swiped 17 bases. He was coming off a junior season in which he batted .413 and was named 2016 Preseason All-State by the Maryland State Association of Baseball Coaches (MSABC) going into his final year.

Named to the prestigious Brooks Robinson All-Star Game at Camden Yards, Godrick had two hits and two stolen bases to help the South Stars defeat the North, 5-3. Godrick and two teammates in lefty Tyler Blohm and catcher Carter Sears stole the show that July day following the Orioles’ 11-6 victory over the Toronto Blue Jays. Blohm started and pitched two scoreless innings throwing to Sears, who caught the entire game for the South and Godrick cleared the leftfield wall at Oriole Park.

Godrick, who also played football and is considered one of the best overall athletes to come out of Spalding, utilized his speed (6.75 seconds in the 60-yard dash, pro-speed), instincts and excellent arm to cover a lot of ground in centerfield and frequently cut down opponents trying to take an extra base.

“Having Billy in centerfield was also a nice defensive luxury that not many teams had,” said coach Palumbo. “He would cause havoc on the base paths and when he was on base things would happen for us.”

Palumbo pointed to Godrick making the big plays defensively in the huge three-year run to prominence. Spalding took the spotlight away from longtime dominant Calvert Hall going 8-2 against the Redbirds during the tri-streak in which the Cavs were 77-13 overall. Anyone who saw the Cavaliers during that time, especially the 2016 season, might have seen one of Godrick’s running or diving catches, highlight reel stuff, but it was an at-bat that Palumbo will never forget.

“Billy made a lot of special plays during his three-year starting role for us, but one that is certainly memorable was his home run to leadoff our 2016 MIAA winners bracket victory against Calvert Hall,” said the coach. “He set the tone for what was one of the most memorable games in Spalding baseball history.”

Godrick took his tools and gregarious demeanor to the next level in baseball and academics at Fordham where he earned an undergraduate degree in accounting. As good a baseball player Godrick has been, he is as good a student. An honor roll student at Spalding, Godrick continued his academic excellence at Fordham making the Atlantic 10 All-Academic Team his last two years and the Commissioner’s Honor Roll all four years.

He also sparkled out on the baseball diamond with his bat and glove. After being the only Rams’ player to start all 55 games in 2018, batting .259 with five home runs, a dozen two-baggers, 25 runs scored and 27 stolen bases, Godrick stepped it up in 2019, ringing up the numbers. Batting .265 with seven home runs and 20 doubles, he drew 89 walks, swiped 56 bases in 67 attempts and tallied an eye-popping 90 runs to spark the Rams streaking to the Atlantic 10 Championship.

Godrick made a dazzling running catch that helped win a semifinal contest, making the local TV channels highlight reels and eventually putting Fordham in the NCAA Division I Baseball Tournament.

Moving on to Towson University, Godrick is playing this spring as a graduate student/player and in his first at-bat with the Tigers, Godrick drilled one out of the park.

“There are few players who bring the energy and attitude to the field that Billy did,” said Palumbo, who was an outstanding infielder on a DeMatha Stags’ team that won three consecutive Washington Catholic Athletic Conference Championships.

“He was a great teammate, a great student and obviously a great player worthy of this recognition. Players and people like Billy are why I got into coaching and why I have so much fun doing it.”