10 Years of Excellence: VSN’s No. 3 Baseball Infielder of the Decade 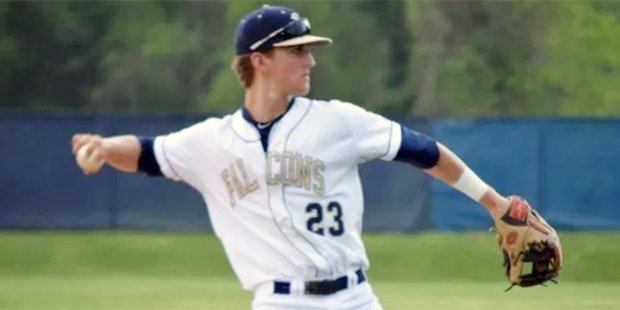 Baseball has lost a gem, but our nation could be better for it.

In a truly admirable decision, Severna Park graduate Kody Milton, one of the finest high school baseball players to come out of this area, has given up the game after giving up a baseball scholarship at the University of Maryland and enrolling at the U.S. Naval Academy last year.

With his coach and father, former major leaguer Erick Milton, by his side, Kody Milton signed with and attended the University of Maryland on a baseball scholarship. This spring, however, he transferred to the United States Naval with a desire “to serve his country.”

“Kody decided to transfer because in his words, he wanted to serve his country,” said his dad and high school coach Eric Milton, who starred at Maryland (1994-96) and went on to pitch 11 years in the major leagues (1998-2008) with four teams, compiling an 89-85 career record including a no-hitter in 1999. The New York Yankees drafted Milton in the first round of the 1996 draft and he was later traded to the Minnesota Twins where the State College, Pa. native spent six years of his MLB career.

“He wants to focus on his studies. I am obviously very proud of Kody and the young man he is becoming.”

Kody Milton was a natural hitter with exceptional poise from day one as a four-year starter at Severna Park High school setting records and leading the Falcons to the third most area wins (82), the least losses, highest winning percentage (.837, 83-16) during his four years; three trips to the Class 4A State Final Four (two of them to finals), four consecutive Anne Arundel County championships, and three seasons of 20 wins or more.

Playing the corners (1B and 3B) well and coming through in the clutch as a dependable relief pitcher, especially in closer situations, Milton sparkled. Defensively at the corners with his advanced actions and instincts, he was as good as anyone over the time he spent with the Falcons, but it was with his bat, swinging from the right side, that impressed most who saw him.

Milton had a career batting clip of .453 boosted by .580 and .514 seasons in his junior and senior years, respectively, with 76 of his school record 121 knocks, scoring 70 of his 102 runs and knocking in 67 of his 100 RBI’s in the last two campaigns. In addition, the fluid swinging Milton walloped 21 career home runs (eight in his farewell season) to tie the school record set by third baseman Brent Jones from 2008-11.

Blessed with the ability and demeanor to rise to the occasion, Milton always seemed to be, excuse the cliché (but it fits well), calm, cool and collected in pressure situations. A prime example of his responding to the game on the line with his team down came in May of 2017, when Old Mill got ahead by two runs late in a game crucial to the Falcons’ attempt to win a third straight county championship.

Milton delivered not once but twice, a frequent habit of his. First he drilled a two-run dong to left-center to tie the game at 6, and followed it up with an encore bomb to propel an 8-6 victory for the Falcons. Shortly after, the team went on to rack up a third consecutive county crown.

“It was a lot of fun coaching Kody,” said Coach Milton, who coached the Falcons two years before Kody came in. “He made it easy for me being such a great leader. I think he watched the way I handled things in my playing days and I think he picked up my laid back attitude. Nothing really seemed to bother him.”

Milton carried himself as most successful professionals do, always keeping his head up and moving on to the next play or at bat. He never seemed to dwell on the negatives and would wipe them out with a good play or at bat. In the four years this reporter covered his games, never was a bad word said about him, friend or foe, opposing player or coach.

Kody earned his way and that’s why the awards poured in for him his last couple seasons. Let’s open the chest: 2017 – Under Armour All-American and played in the Under Armour All-StarGame that summer at Wrigley Field in Chicago…Baltimore Sun All-Metro Player of the Year, Washington Post All-Met…2018 – Maryland State Association of Baseball Coaches Preseason Team…Rawlings –Perfect Game Honorable Mention All-American…Baltimore SuN All-Metro…Washington Post All-Met Player of the Year…All-Anne Arundel County all four years.

Milton played at College Park in 2019, but only managed to get into 12 games, starting four. There was no play in 2020 and Milton is listed on the 2021 Navy Roster as a sophomore, but has decided not to play this spring and concentrate on being a full-time Midshipman.

The only thing missing for Kody and his dad the coach and the Falcons’ team was a State Championship, but it’s going to be okay. The game of baseball is important, but the game of life is what really counts and the Miltons along with Kody’s mom, Kim and sister, Kylie know it.

“Kody is still trying to figure out his future, but I can see him being very successful on whatever path he chooses,” said Coach Milton. “My message to him and my players was always that baseball is a game of failure (.300 3-or-10 is considered a success in baseball) and you are going to fail. It’s really how you respond to the failure and continue to work hard.