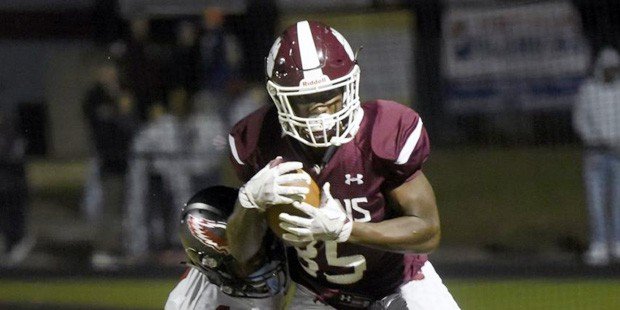 Through the air, there was just no stopping Ethon Williams.

Or it must have just seemed that way to befuddled opposing defensive backs hoping to keep the flashy and fleet wide-out from making a mockery of their efforts to contain him.

Although a knee injury cut short his freshman season after just one catch, Ethon Williams is primed for a big career with the Boston College football team.

Even though rival defensive coordinators were certain Williams would be the targeted over and over, especially with the game on the line, they had no answers for his ability to run a precise route, separate himself from double coverage and high-point a pass.

During his career at Broadneck High School, the glue-fingered Williams made catch after clutch catch for the Bruins.

“Route-running is something I worked on every day,” he said. “But my hands are a gift.”

“I knew about Ethon because I had coached his brothers,” Harris said. “When he started to play, I think he saw an opportunity, and he ran with it. He worked really hard to refine some of the little details in route running and he started lifting weights, too. His sophomore year, things really started to click for him. He had 800 yards, and that doesn’t happen all the time (to a sophomore). Plus, we pulled our starters early in a lot of games, so he could have had a lot more.”

Williams said that he had no qualms about stepping into the starting lineup as a freshman.

“I believed in myself and never thought anything of it,” he said. “I was used to hanging out with my brothers and other older guys. And once you put a helmet and pads on, everybody is the same.”

As good as those numbers in his first three seasons were, the Boston College commit was even more productive in his senior year with the Bruins, catching 66 passes for 992 yards and 22 TDs for the Anne Arundel County champs.

Given his almost unparalleled success for four years at Broadneck, Williams has been selected as VSN’s No. 2 Wide Receiver of the Decade.

He began his senior year with seven catches for 61 yards and a touchdown against Bowie High School in a 21-13 non-league victory and added a whopping 209 receiving yards and four TDs on just seven receptions in a 61-49 win over Arundel High School.

Harris said that his star receiver had an answer for nearly every Wildcat rally in a game Williams remembered as his favorite while playing for the Bruins.

“Every time the score would get close, Ethon would score another touchdown,” the coach said. “It seemed like it happened the whole game.”

After that key win, Williams snagged six passes for 56 yards and two scores in a 48-6 wipeout of Northeast High School before securing 10 grabs for 95 yards on scoring tosses of 20 and 9 yards in a 35-0 whitewash of Old Mill High School.

He then continued to blossom in his final campaign with a seven-catch, 98-yard performance for two scores in a 28-7 victory over Meade High School.

And don’t forget his big night against Seven Park High School, nine receptions for 142 yards and one touchdown in a 34-17 triumph.

His regular-season finale was another gem, polished off with 108 yards and touchdown catches of 29, 24 and 33 yards in a 48-6 rout of Annapolis High School that stretched the Bruins’ winning streak to 10 games.

With all of that in mind, it’s no wonder Boston College lured him to New England to play for the Eagles.

The 2020 season ended abruptly, however, when he tore his lateral meniscus the week between making his first catch of the season against Duke University and an upcoming battle against the University of North Carolina.

Five days later, Williams had surgery and is already off crutches and using an immobilizer after a lengthy and ongoing rehabilitation process.