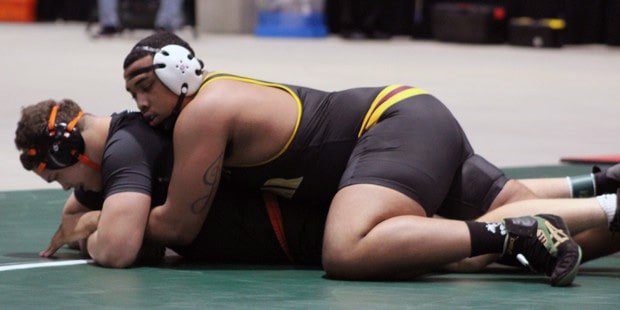 When you look at dominant Baltimore area wrestlers in the heavyweight division over the last decade, one name stands above all the rest.

Dunbar graduate Jorden Pryor, VSN’s No. 2 Upper Weight Wrestler of the Decade, dominated the 2A/1A states during his career with the Poets, winning three titles. He finished his high school career with 68 consecutive wins, a streak that dated back to his sophomore year, and he never lost to a Maryland wrestler after his freshman year. His overall high school record was 144-5.

He also won three Baltimore City championships and three 2A/1A North Region crowns and finished his senior year ranked No. 11 in the nation by InterMat. 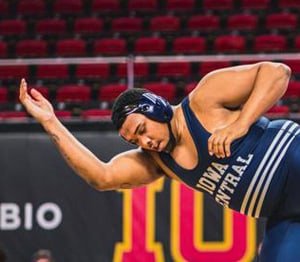 Jorden Pryor is currently in his sophomore year at Iowa Central Community College as builds his college resume for a shot at D1 opportunity.

Pryor’s win streak nearly ended in the semifinals of the 2019 state tournament when he was called for an illegal slam on Parkside’s Mike Collins. The action was not malicious in any manner, it was just the result of two big guys going at it hard and momentum taking over when Pryor switched from a single-leg to a double-leg takedown.

The Parkside coaches saw it like that too, as they did not take the win by disqualification. Instead they allowed Pryor to move onto the semifinals by forfeit since Collins was truly injured during the mayhem and could not continue.

“I prayed to God,” said Pryor at the time. “Once I tried to get him down. I had a single leg. I switched the single to a double leg and tried to catch him, but you know with heavyweights it’s hard and he just went down. I just prayed to God so he could make me keep going. And he did.”

Pryor then pinned Oakland Mill’s Ernie Smith, in 2:46, in the championship match to capture this third state title and cap his high school career on that winning note.

“I had to go out with a bang,” Pryor said of the fall. “I was trying to work my stuff. I was really trying to tech him but coach was just like, get it over, so I had to get him in a pinning combination. My mindset was really, just try to get this over with. (It’s) my last ride.”

As a junior Pryor went 33-0 and earned the honor as VSN’s Upper Weight Wrestler of the Year. When he capped that season with his second straight title, he became the first Baltimore City wrestler to ever win a pair state crowns. The accomplishment made him a true star at Dunbar, where those accolades usually go to athletes in football and basketball.

“Jordan is a big deal at Dunbar and in Baltimore City as an athlete,” Dunbar Coach Doug McClain said in 2019. “It is very hard to get that recognition with football and basketball being king. But with that being said, he has to be one of the humblest guys you’ll ever want to meet. He doesn’t have the big head. He is a hard worker on the mat and in the classroom. He’s funny, very polite, and is always willing to help his teammates.”

On the college level, Pryor initially committed to the University of Maryland, but ended up at Iowa Central Community College. He went 5-1 as freshman for the Tritons, while his sophomore campaign, delayed by COVID-19, just got underway last Saturday when he lost in dual meet against Division I superpower Iowa State.

A bright future on the mats, however, seems part of Pryor’s future. A strong second campaign at ICCC should be parlayed into another D1 opportunity.