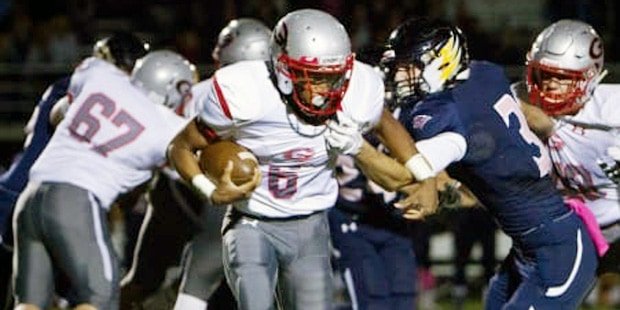 Among the all-time top running backs in Howard County, there’s Wande Owens — and then there’s everyone else.

By the time the speedster from Glenelg High School was through torching rival defenses for the Gladiators after bursting on the scene as a skinny freshman JV call-up in 2015, the county record book for rushing was left in shambles.

Now at sophomore at Yale University, Wande Owens is no longer running the football, having transitioned into a full-time defensive back.

From his very first game, when Owens carried 29 times for 215 yards in a win over Chesapeake-Anne Arundel in a Class 3A East Region semifinal, to a 103-yard effort and a 10-yard TD jaunt in a disappointing 35-7 setback to Oakdale High School in the 2018 Class 2A championship, he amassed an impressive 6,361 yards and 81 touchdowns.

“Two minutes before the start of that game against Chesapeake, I told him that he was starting,” former Glenelg coach Butch Schaffer remembered about Owens’ debut. “I knew he could take the hits. I coached his brothers, so I’ve known him from the time he was growing up. I knew he was really skilled, and from then on he was our lead dog.”

Simply put, no other runner in Howard County public schools history can hold a candle to Owens’ accomplishments on the gridiron.

From his first carry — a 10-yard sweep — to his final run of the game, Owens proved he belonged and why he was chosen to be VSN’s No. 2 Running Back of the Decade.

“I was really nervous at first,” Owens said. “I remember thinking how different it was from JV. The guys were bigger and faster.”

After that high-octane performance, he began blowing up on social media.

“It was surreal,” he said. “I saw a lot of stuff on Twitter. It was just a great experience.”

There was no looking back after such a special premiere led to a record-setting career.

Wilde Lake High School’s Raphael Wall is the only other county performer to eclipse 5,000 yards in a career until the Yale University recruit topped that mark by more than 1,000 yards in the 2018 campaign.

All in all, Owens dwarfed the competition on the field and in the classroom that led him to eventually become one of five individual winners who each received a $4,000 scholarship at the 56th annual Scholar Athlete Awards Dinner presented by The Greater Baltimore Chapter of National Football Foundation and College Hall of Fame.

Going into his sophomore year at Glenelg, Owens said he felt a lot more confident.

Owens ran for a then-county record 2,504 yards and 28 touchdowns that season before those numbers slipped the following fall after missing four games with a leg fracture.

He said that he still managed to have one of his most satisfying wins in his junior year when the Gladiators ruined River Hill’s bid for an unbeaten season in a 14-6 victory two weeks after bowing, 20-0, to the Hawks.

Owens carried the ball 25 times and produced only 67 yards in the first encounter before totaling 167 yards on 28 touches in the rematch.

“I was still coming off an injury in the first game, and I didn’t play that well,” he said. “But in the second game, I was much more aggressive.”

As a senior, Owens recovered his mojo and was better than ever.

The 5-foot-11, 185-pound workhorse, who averaged nearly 23 carries per game in his career, made sure sure his final season was his best — and the best-ever single season by a Howard County runner when he produced 2,687 yards on 301 attempts and 40 TDs, good for an 8.9-yards-per-carry average with a hefty 40 TDs.

In a 42-14 romp over longtime powerhouse Howard High School, for HoCo bragging rights and the Elgard Trophy, he served notice that the Gladiators would be the team to beat when he totaled 196 yards with scoring runs of 13, 82 and 72 yards early in the season.

Just to show he could contribute in other ways, Owens opened the scoring in that contest with a spectacular defensive play on a 96-yard pick-six.

Adding just four more yards on the ground against Howard would have been the first 200-yard game of the season, a mark he would exceed eight more times in 2018 and go on to be named USA Today’s Maryland Offensive Player of the Year.

Included in his plus-200-yard gems was a two-touchdown 280-yard monster in a 12-0 triumph over stubborn River Hill, including runs of 94 and 69 yards when he became the county’s all-time rushing leader.

While leading the Gladiators to their 13th straight victory and first state final in a 35-0 whitewash of New Town, Owens totaled 156 yards and a touchdown.

“His leadership and vision are just really special,” Schaffer added. “He’s the kind of kid who does everything right. I never had to talk to him (about something he’d done wrong). He was a good example for every kid on our team. He showed up for every game — and every big game — every week.”

Owens has had to make the adjustment to playing cornerback at Yale, which he says is a “whole different world.”

Although he did play some defense in high school, the full-time gig as a DB is a work in progress.

“It’s completely different,” Owens said. “At first, it’s difficult to go from being ‘The Guy’ to being the low man on the totem pole. And as a defender you have to be much more reactionary. It’s like speaking a different language. But I’m getting more comfortable with the schematics. and everything else about it.”

Owens said he understands why the Ivy League opted not to play this fall, although he would prefer to be back with his teammates on the field.

Until then, he’s working out to make sure he’s ready when play resumes.