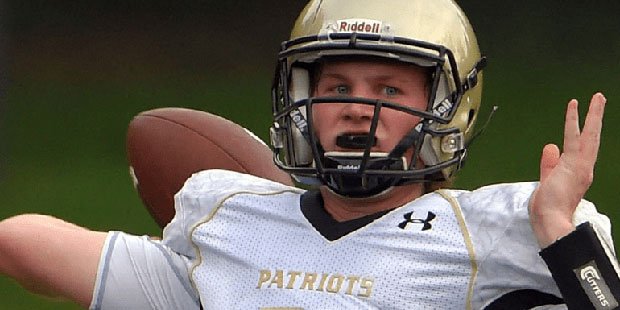 Former Calvert Hall College High School coach Donald Davis, now at Sidwell Friends School, said that some people were surprised — and more than a few were also disappointed — when his Maryland Interscholastic Athletic Association A Conference squad was handed a 28-21 defeat by B Conference member John Carroll School in 2015.

Davis, though, knew how tough of a matchup the Patriots would be, given the skill and stature of their quarterback.

Kurt Rawlings, VSN’s No. 2 Quarterback of the Decade, was that good.

As a senior at John Carroll, Kurt Rawlings passed for 3,438 yards and 52 touchdowns while leading the Patriots to an undefeated season and the MIAA B Conference championship.

He would go on to prove as much after leading John Carroll to wins over the Cardinals and their A Conference archival Loyola Blakefield while finishing undefeated and claiming the program’s first outright B Conference crown since the 2001 squad earned a Silver Division title.

“It was really a fun game to beat them there (at Paul Angelo Russo Stadium in Towson) in front of a big crowd,” Rawlings said. “We were still finding our identity, and after that, we felt we could play with any team in the state.”

Davis, to say the least, was impressed by the Patriots’ talented signal caller.

“We called him the ‘Death Dealer,’” Davis said, alluding to the popular online sniper game. “People asked me how we could have lost to John Carroll, but they had a really good group of guys (Alex Rasmussen, Josh Payne-White Ky’el Hemby and Niko Rice) that he could go to. I coached him later in an all-star game and he reminded me of (former CHC quarterback) Thomas Stuart. Kurt was just a little bigger, stronger and faster.”

In a non-league encounter against Easton High of Talbot County, Rawlings had a perfect game through the air by completing all 14 of his passes for five touchdowns and 311 yards in a 42-14 victory while eclipsing former University of Maryland and John Carroll alum Al Neville’s Harford County record for TD passes in a season.

He then shattered Neville’s mark by by tossing for four more touchdowns and 268 yards in a 49-14 win over St. Mary’s High School.

All told, the 6-foot-3, 195-pound standout finished the season with an MIAA single-season mark of 52 TD passes while connecting on nearly 73 percent of his passes for 3,438 yards after completing 16-of-25 passes for 180 yards and four TDs in a 35-14 win over Archbishop Curley in the B Conference title game.

Rawlings also rushed for 85 yards in the triumph over the Friars as the Patriots claimed the No. 5 spot in VSN’s Top 20 rankings.

Considering that he didn’t start at quarterback until transferring from St. Paul’s School to John Carroll as a junior, it’s not difficult to conclude that he was a quick learner after training at the Quarterback Factory. 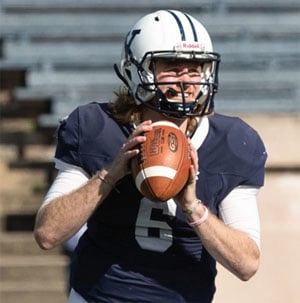 Rawlings passed for a school record 7,638 yards and 71 touchdowns, while leading Yale University to two Ivy League championships during his college career.

“Growing up, I was lucky to have a lot of success in every sport,” Rawlings said. “But once I decided to train for just one sport, I really believed I could do something with football.”

He was named VSN’s Offensive Player of the Year before heading off to Yale University and having a banner career in the Ivy League as well. His college success started to take shape in the seventh game of his freshman year when he earned Ivy League Rookie of Week honors after throwing for two scores and rushing for 74 yards in 21-14 win at archival Harvard University.

‘I felt I had the size and the arm, and once I got my brain right, I was able to earn the trust and support of my teammates,” he said about his success at the collegiate level.

Rawlings established himself as a sophomore, going through the air for 2,320 yards while completing 67 percent of his passes and leading the Bulldogs to the Ivy League crown by completing 26-of-34 throws for 304 yards and two TDs in a come-from-behind victory at Princeton University.

After an injury-marred junior campaign, he finished his senior season by engineering a miraculous 50-43 overtime win over Harvard in the Yale Bowl.

“We were down two touchdowns with about four and a half minutes left,” Rawlings recounted, noting that halftime lasted about 90 minutes due to student protesters who took over the field during the intermission.

The late comeback came after Rawlings told his teammates “that we just needed to have some fun and complete some passes. When we scored and then recovered the onside kick, I knew we were going to win.”

He set school records with 583 completed passes in 926 attempts for a robust .630 completion percentage while leading Yale to its second Ivy League crown in three years.

Rawlings also set program standards with 7,638 yards through the air, 60 passing TDs, 7,907 combined yards and 71 total touchdowns. In addition, he was one of 26 finalists for the Walter Payton Award and earned the Asa S. Bushnell Cup last December for being named the 2019 Ivy League Offensive Player of the Year.

Even though he was considered to be a pro prospect after setting almost every program quarterback record for the Bulldogs, Rawlings decided to give up the sport after being invited to the prestigious East-West Shrine Game in January.

“I love football, but I’m completely at peace with the decision,” he said. “I took my fair share of hits. I even had a moment in the Harvard game when I wasn’t totally intact mentally. Part of my decision to go to Yale, other than to play football at the next level, is to do something else with my life.”

While he’s still trying to figure that out, Rawlings said that becoming a ski instructor in Montana is a short-term goal.

“I’ve had nothing but great support (about the decision to stop playing) from my family and friends,” he said.