10 Years of Excellence: VSN’s No. 2 Pitcher of the Decade 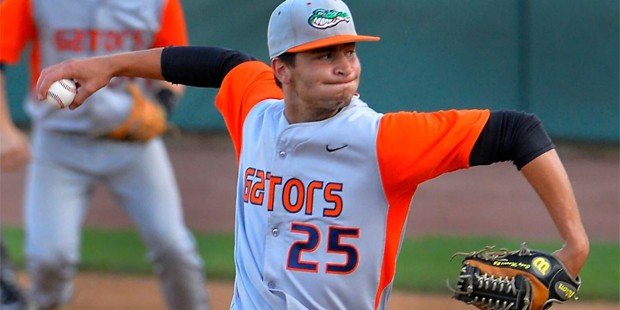 Cody Morris has been tested time and time again and has always passed with high grades.

As the No. 2 Pitcher on the VSN 10th Anniversary All-Decade Team (2011-2020), Morris has gone from Reservoir High school in Howard County to a surgical table at the University of South Carolina to the Cleveland Indians’ organization where he is undergoing a huge test. It’s the test of all tests for baseball pitchers – the passing grade is a ticket to the major leagues. 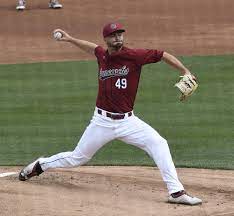 After recovering from Tommy John Surgery, Cody Morris embarked on an outstanding college career at the University of South Carolina. Now he is pitching in AA with the Cleveland Indians organization, progression towards a potential Major League opportunity.

The former VSN Pitcher of the Year in 2014 when he led the Gators to their first and only State Championship, pitched only 12 innings his senior year with no record but finished 22-4 with 258 K’s and a 1.03 ERA for his career and had Tommy John surgery. The Baltimore Orioles drafted him in the 32nd round and he didn’t sign but rather went on to South Carolina.

Morris became a red-shirt sophomore with the Gamecocks and went 9-3 and was chosen on the 7th round of the MLB free agent draft by Cleveland, signed and has been assigned to the Tribe’s Akron Rubberducks’ AA team. The 6-foot-5, 215 pound right-hander’s future appears bright with Cleveland.

There is a good chance that Morris will be taking the mound in the big show in the near future. He’s got what it takes both physically and mentally. Let’s tell you his story starting with his decorated high school career as the ace of the Reservoir Gators.

Morris grew up playing baseball in the Savage Eagles youth program with his dad, Dale Morris one of the coaches. Several of his Reservoir teammates played with him on the way up to high school.

“The work ethic they had was incredible,” said Reservoir coach Adam Leader in mentioning the components of Morris and the group that carried them to the coveted 2014 Class 3A State Championship.

Morris was exceptional in talent and poise in his freshman year of 2012 going 7-1 with 65 strikeouts and an 0.99 ERA, but the Gators would lose in the 3A East Region final two years in a row. A pair of Eastern Shore teams eliminated the Gators in JM Bennett and Stephen Decatur those first two Morris years. The ace went 7-2 with 103 strikeouts and a 1.40 ERA his sophomore season. By 2014 the then 12-year old school Reservoir won its first region title, advancing to the MPSSAA State final.

Reservoir came to play in their first appearance in the State semifinals on a May Tuesday night at Joe Cannon Stadium in Harmans of Anne Arundel County in a doubleheader that paired the Gators and North Harford for the State Championship game at Ripken Stadium four days. This reporter would cover both the semis and final.

Morris worked the first four innings of a 12-4 rout of Thomas Johnson of Frederick, yielding only two hits and striking out nine. The Reservoir ace, who bats third, also had three hits as the first five Gator hitters went a combined 12-for-20 with seven runs knocked in and seven runs scored. Third baseman Jack Barry, a close friend of Morris, belted a two-run dinger and pitched the last two innings as the Gators advanced to their first state baseball championship vs. North Harford, an 8-2 victor over LaPlata.

The ensuing State final was all Cody Morris as he fired a two-hitter with 11 K’s, including the last batter, and walked only one in a 2-0 shutout. His lifelong catcher Danny O’Hagan said, “It was his best game I’ve ever caught.”

Coach Leader noted that, “Cody dominated on the mound. I was a nervous wreck before the game and on the bus to Aberdeen, Cody sat behind me as he did for every game. He told me to relax and he was going to get me my first state championship.”

Morris really cherishes that night and said, “I will always remember the state championship game and my teammates and coaches. Something coach Leader did before each season that really brought the team together was he had the whole team come to his house. It was a lot of fun and it really set the tone for our season.”

“We had a mission coming into the season and we reached it after watching the seniors cry last year losing in the region final,” Morris said that night.

Morris was the Howard County Pitcher of the Year three times, Baltimore Sun and Washington Post All-Metro in 2014 and the Maryland Gatorade Player of the Year. The Maryland State Association of Baseball Coaches (MSABC) named him Preseason All-State his last three years at Reservoir.

It wasn’t long after Morris passed the State Championship test, he had Tommy John surgery that would limit his senior year to 12 innings. He would be named All-Howard County for the fourth straight year by the Coaches as a DH.

Reservoir lost to Mount Hebron, 1-0, in the 3A East Region final in 2015 and the latter Vikings advanced to their first State final in 35 years where they lost 1-0 to Ljay Newsome and Chopticon. Newsome fired a one-hitter with 17 strikeouts.

Morris began his rehab following the Tommy John surgery and by 2017 he was back pitching at South Carolina, going 3-2 with a 3.66 ERA. The following season as a red-shirt sophomore, Morris posted a 9-3 record with a 3.46 ERA for the Gamecocks striking out 87 and walking 31 in 83.1 innings.

As a workhorse for the Gamecocks, Morris led the team to a good showing in the Super Regional held in Arkansas. He showed that his velocity was still there after the successful surgery that is considered to be “an epidemic” by high level doctors, such as, Drs. James Andrews and Glenn Fleisig. Morris was throwing 92 to 93 mph topping out at 95. And his curve ball and change-up had not lost anything either.

“I loved everything about South Carolina, my time playing there, the stadium and the town,” said Morris, who credited Gamecocks’ veteran pitching coach Jerry Meyers for much of his development as a pitcher and person. “Coach Meyers is a legend at South Carolina (Meyers is currently assistant athletic director at SC and is a former Team USA coach and head coach at Old Dominion). He definitely knows pitching and he challenged me to grow up as a man.

“He taught me how important character and maturity are. The coaches were great there.”

When the Indians came calling after the 2018 draft, Morris signed for the slot value of $185,600 and was off to the minors and his pro career pitching in 21 games on two teams in A and high AA ball in 2019. Morris was 7-4 with 111 K’s and 27 walks in 89 innings and has been assigned to the Class AA Akron Rubberducks for this season after no season in 2020.

“I’m in Arizona right now rehabbing some shoulder soreness, dealing with a back muscle on the side and everything will be okay and I will be pitching at the AA level,” said Morris, who said he hit 99 mph last September and averaged 95.5 mph last September. He is hoping to have a good season and push to see action in the big league camp in 2022.

Morris is planning to get married to Margaret Brannigan on Dec. 17 of this year. The two met at South Carolina and will be holding the wedding there. Former Reservoir teammates, Jack Barry, Danny O’Hagan and Jon Miercwa are going to be in the wedding. Barry will be the best man. You just knew that Cody would put a Gator touch on the proceedings.

“Cody has an amazing family and we are absolutely proud of him and the amazing young man he has become,” said coach Leader. “He is an incredible pitcher and even more incredible person, on and off the field.”