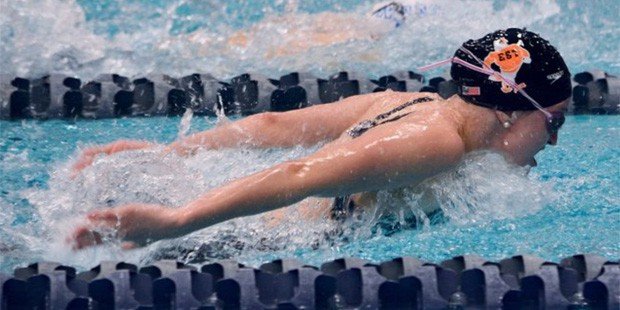 Of all the athletes who have performed in the Interscholastic Athletic Association of Maryland A Conference championship swim meet for the league’s most dominant program, no one can match’s Meghan Lee’s perfect run in the finals for McDonogh School. 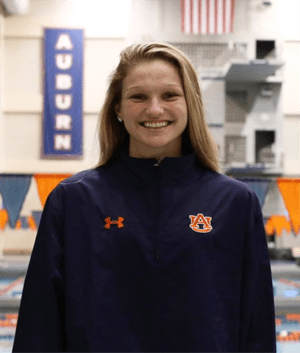 Meghan Lee has moved from elite high school competition in the IAAM to the ultra-competitive collegiate stage in the SEC as a member of the Auburn University swim team.

Lee, now competing for Auburn University, is also among the Eagles’ all-time top-10 finishers in nine of a 11 possible events, including two IAAM individual school records (100 butterfly and 100 backstroke) and second in the 200 individual medley only to All-American and Ivy League Swimmer of the Year Geordie Enoch, who swam for Harvard University.

Lee is also part of two school/conference-record relays (200 medley and 400 freestyle), which were both set in her senior year when McDonogh collected its fifth straight and 14th overall team title.

She led-off the record-breaking 200 medley relay by swimming the backstroke and anchored the winning 400 free relay in automatic All-American time at the championship meet.

“Meghan has been one of the most dynamic and versatile student-athletes we’ve had on our team since Anne-Marie Botek,” McDonogh coach Scott Ward said after the 2020 meet. “We couldn’t ask any more of her, and her passion for McDonogh swimming has been incredible. In fact, as we were discussing possible lineup placements two weeks ago, she was crystal clear that she would swim any event to help the team hang on to the title. We will absolutely miss her next year but fortunately, she has re-established the high bar in passion and performance that we know her teammates will strive for each year.”

That passion and unrelenting will to win drove Lee to success from an early age, beginning when she started as a swimmer for the Springdale and Padonia summer teams near her native Timonium.

She said that she had played a bevy of sports — field hockey, lacrosse, soccer and basketball — on youth recreational teams before becoming a full-time swimmer.

“One day at the pool, I went up to a coach and asked if I could join the team,” she said. “I was six. But I just had a natural love for the water. I didn’t have much talent when I started, but then I joined Eagle (Swim Team at McDonogh), and I got better. I couldn’t wait to swim — couldn’t wait to drop times.”

She said that her first “breakout” performance as a club swimmer came in Pittsburgh when she was 11 or 12 when she barely missed a sectional cut time.

By the time she was 13, she made the sectional cut and was on her way toward making an immediate impact on the McDonogh varsity as well.

“I had so much fun in high school swimming,” Lee said, adding that the IAAM proved to be very competitive because of the number of high-level club swimmers it attracted.

Her drive to excel comes from a very primal instinct.

“I hate losing more than I love winning,” said Lee, who did very little of the former with the Eagles. “I’m not sure if that’s always a good thing, but that’s who I am.”

As much as she enjoyed winning all four team championships, she said that taking the 2017 crown in her freshman year after a disqualification in one event that cost the Eagles 40 points was a special moment.

McDonogh rallied down the stretch when Lee took the 100 backstroke by more than four seconds, Erin Vance and Marietta Gately finished one-two in the 100 breaststroke and Ryan Gillin, Lindsey Bloom, Lee and Vance teamed up to cop the 400 freestyle relay in an 11-point come-from-behind triumph over runner-up NDP.

Lee was dead-even with her NDP rival when she entered the water on the third leg of the relay before she pulled away to give Vance a nice cushion to bring home the win.

The Eagles would hardly have to play catch-up in her sophomore year when they simply overwhelmed their A Conference foes in the championship meet, winning 11 of 12 events on the way to a 70-point verdict over the second-place Blazers.

Lee added wins in the 100 butterfly and 100 backstroke and two relays to her burgeoning trophy case, which would continue to grow after another triumph in the 2019 season-ending meet.

That’s when she claimed the individual medley and backstroke titles by wide margins, while also taking one relay and finishing second in another, helping McDonogh to secure a 51-point margin of victory over the Blazers.

The 2020 championship meet could only be viewed through the lens of what had transpired during the regular season when NDP pulled a major coup by pounding the Eagles, 97-73, in a stunning dual-meet upset.

However, McDonogh avenged its first conference loss in five years with another sterling performance by Lee and her mates in a resounding 60-point victory.

“We got a little too comfortable, so we had multiple meetings about making sure that wasn’t going to happen again,” Lee said after the meet.

With all of that behind her now as she enters her first year in the ultra-competitive Southeastern Conference, Lee is getting a full taste of collegiate swimming at a high level.

That means practices in which she might log more than nine miles per day — and mostly sleep when she’s not swimming — during the winter break.

So far, in a season truncated by the COVID-19 pandemic, she finished second in the 200 backstroke against the University of Florida in the Auburn Fall Invitational and was fourth in the same event in a loss to the University of Georgia.

Besides swimming, Lee will have a full academic plate at the Alabama school while majoring in civil engineering.

“It attracts a certain type of person” she said about choosing the Tigers over North Carolina State University. “It’s just a special place.”