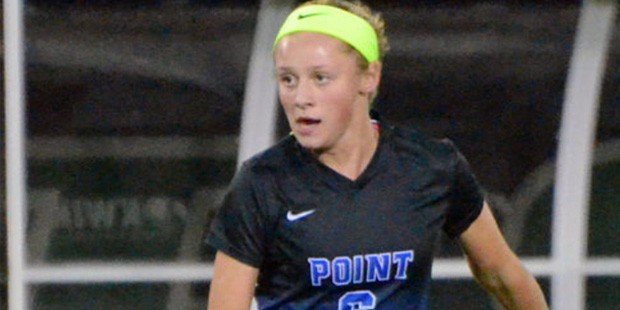 Julie Lynch had it all and, more importantly, made it happen in a big way for Sparrows Point during a four-year career that included four Class 1A state titles, three state title game-winning goals, three Baltimore County crowns and two undefeated seasons.

The second player from any sport to earn three VSN Player of the Year awards, she scored 54 goals and added 51 assists during that span. 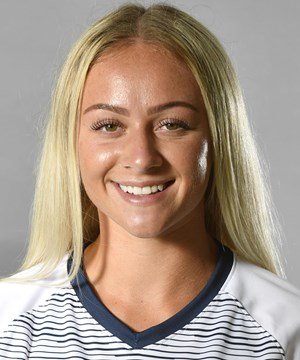 As a senior, the current West Virginia sophomore played in the sixth annual High School Girls Soccer All-American Game in Orlando, Fla. and was named to the ALL-USA Girls Soccer Second Team by USA Today.

Lynch’s performance in the 2018 Class 1A final was among her best efforts.

After underdog Smithsburg scored the equalizer midway through the opening period, the Baltimore County champs jumped back on top 61 seconds later when Lynch connected on a well-placed free kick just outside the 18 to give her team a 2-1 cushion.

When the Leopards tied it again in the second half on a PK, she answered in kind with one of her own to coax her team toward another title and another perfect season.

“Once they tied it (in the second half), that was a wakeup call for us,” Lynch said after the victory. “We knew we needed to take advantage of every chance we got. I’ve only missed one PK in my life, so I thought I’d make it. But you never know. You could miss or hit the post.”

Her 17th goal of the season, to complement 12 assists, iced the game for the Pointers and cemented her status as VSN’s No. 2 Girls Soccer Midfielder of the Decade — the only public school player to be selected.

She had plenty of chances to play for top private school programs, but she wanted to be at the Baltimore County school that is a magnet school for environmental studies.

Lynch said that many people might think that being an athletic and academic All-American and Scholar might be the highlight of her career, although she would disagree.

“Winning four state championships and three county championships with my teammates meant so much more,” Lynch said. “Being able to play with my teammates is something I will never forget. There were many times that I know they were depending on me to step up and take the lead during a game and it never made me feel pressured. Instead, it made me realize how much they trusted me, which meant the world (to me). The feeling that I had when that last whistle blew at the end of those matches was unexplainable, especially my senior year. And I know that all my teammates felt the same.”

Lynch didn’t just rise through the ranks at Sparrows Point, she skyrocketed, considering that she produced 30 goals in her first two season with the Pointers, notching 18 (with 12 assists) as a sophomore.

Moreover, she scored both goals in the Pointers’ 2-1 win over Patterson Mill in the 2016 Class 1A state title game to earn her the first VSN Girls Soccer Offensive Player of the Year designation.

She was also a 1st Team All-State pick, a member of the 2016 NSCAA Fall High School All-South Regional Team, a 2015 and 2016 ODP Interregional All-Star, and a Top Drawer Soccer Combine “Best 11” selection.

And all of that came at the halfway mark of her high school career.

Lynch was even better as a junior, compiling 21 goals and 19 assists while leading Sparrows Point to yet another Class 1A state crown with her all-around play.

Although it was the only year when she didn’t have the go-ahead or winning goal in the title match, Lynch made sure her teammates, especially Kallie Bell, who scored twice in the 3-nil victory, flourished.

“She’s very good at holding the ball and creating opportunities,” Bell said after the game. “So whenever she got the ball, I knew that she would find me if I was open. It’s really nice working with someone (who) you know is going to set you up with the ball.”

Lynch said that she first realized that she might be able to play at a higher level was her freshman year in Boca Raton, Fla. while competing in an ODP event.

“My club coach received a few emails from college coaches at some pretty dominant soccer programs including Northwestern, Notre Dame and the University of Michigan, inquiring about what stage of the college selection process I was in,” she remembered. “Those emails and the things the coaches had to say about me really gave me a boost of confidence and encouraged me to continue to work harder and never give up.”

Showing her true school colors, Lynch said that she missed playing the first game of the ODP event so she could play in her first state title match with the Pointers.

“So here we are six years later, and and I am blessed enough to be doing what most little girls dream of when they start playing soccer,” she said while preparing to compete in a truncated Big 12 Conference season this fall that includes only nine league matches that began on Sept. 11 and concludes Nov. 6.