10 Years of Excellence: VSN’s No. 2 Girls Lacrosse Goalie of the Decade 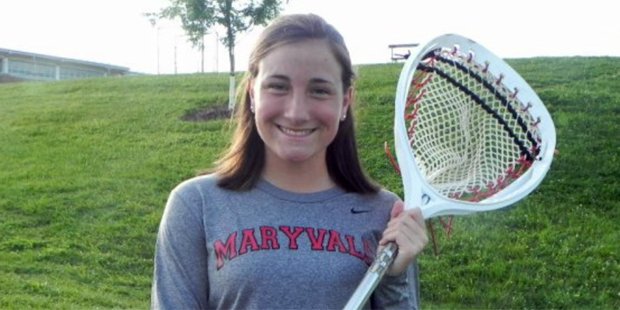 Caroline Federico always felt that she was meant to be a goalie — and not only because her father Michael Federico was a three-time All-America goalie at Johns Hopkins.

“He didn’t push, but I’m the youngest of seven and by the time they got to me, my dad didn’t have anyone that followed in his footsteps, so my family kind of joked to me, ‘Oh, you’re the last hope,’” Federico said with a laugh. “All kidding aside, growing up I wanted to be exactly like him and so I think I got some of his genes, not being afraid of the ball, and just stuck with it.” 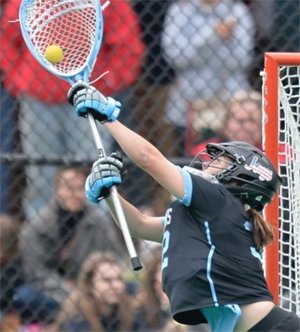 Caroline Federico finished her college career fifth in goals against average (8.83) and 12th in save percentage (.460), after a stellar high school career at Maryvale Prep.

From the time VSN’s No. 2 Girls Lacrosse Goalie of the Decade started playing at the youngest rec level, she said she felt comfortable in the position. When she got to Maryvale, she played a key role in the Lions’ reaching the IAAM A Conference final for the first time in more than a decade.

In her final two years, Federico allowed just nine goals a game against the top competition in Baltimore. She posted a .580 save percentage as a junior and was named VSN’s Defensive Player of the Year after helping the Lions reach the championship final where they fell, 12-11, in the final seconds to McDonogh. Federico made 11 saves.

McDonogh coach Chris Robinson called Federico “phenomenal” after that game and said she was the toughest goalie the Eagles had faced.

“I would definitely say going to the championship junior year was my favorite memory in terms of games,” Federico said. “We were, at that point, one of the closest teams to beating McDonogh. It was really cool. It was devastating that we couldn’t win, but I really think Maryvale was a special place in terms of bonds. My best friends all played lacrosse and I’m still friends with them.”

In the semifinals, she made 13 saves, including nine in the first half, as the Lions upset Bryn Mawr, 9-7, to reach the title game for the first time since 2002 when they won their last championship.

After the Bryn Mawr win, Federico’s Maryvale teammate Carly Ross told VSN, “I couldn’t be happier with Caroline in goal. She is so strong all around and we have confidence in her to save our butts when we really need it.”

A fierce competitor who played her best in the big games, Federico was an Under Armour All-American, a two-time US Lacrosse first-team All-American and a two-time Baltimore Sun All-Metro first-team selection. Inside Lacrosse named her the No. 9 recruit and the top goalie in the Class of 2013.

“She was an all-around leader,” said Jessica Randisi, her coach at Maryvale. “I remember saying many times that she’s the quarterback. Whatever Caroline said everybody was, ‘All right, we got this.’” She was very confident but not in a negative way. She could turn the team around when we were having a bad day.”

Federico said she liked the position for a lot of reasons.

“It grew into having that camaraderie of having a defense that always has your back,” she said, “and really you can just spark a play from defense to offense. I think that ability to make a difference in a game but also have the support of your teammates and to make some key changes in the game to shift the team’s confidence was something I really enjoy. There’s nothing better than making a big save, throwing out a good clear and then sparking your offense.”

Growing up, Federico was surrounded by lacrosse. All of her siblings played as did most of her many cousins. However, she was the only sibling who went on to play college lacrosse, following not only her father but several uncles and many cousins.

She knew where she wanted to play in college from a very young age.

“When I was in kindergarten, my mom said I was running around saying, ‘I’m going to go to Hopkins,’ and she was like, ‘Yeah. Okay. We’ll see about that,’” Federico said with a laugh. “I was just so thankful to be able to share that with my dad.”

At Johns Hopkins, Federico started eight games as a freshman and allowed 8.07 goals per game. She stopped three shots in a double-overtime win against Marquette.

She started every game of her junior and senior seasons and played in the Intercollegiate Women’s Lacrosse Coaches Association All-Star game. She finished her career fifth on the Blue Jays career list for goals against average (8.83) and 12th in save percentage (.460).

After college, Federico, 25, gave private lessons for a while before moving on in her career. Now working in business development for VISA, she and her long-time boyfriend, Alec Scheetz, a Loyola Blakefield graduate, are planning an April wedding.