10 Years of Excellence: VSN’s No. 2 Girls Lacrosse Attacker of the Decade 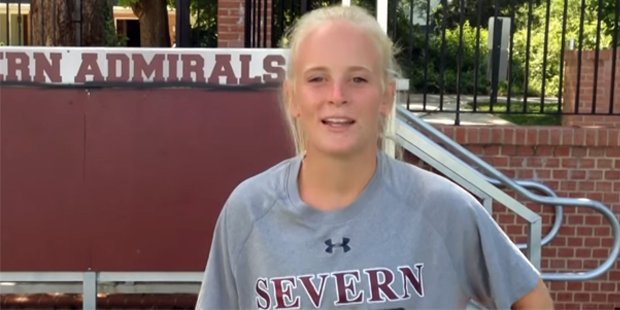 Caroline Steele often played as if she could score as many goals as she wanted.

A few times, she outscored the opposition all by herself. In her Senior Day game at Severn, she poured in a school-record 11 goals in a 17-9 win over Queen Anne’s — and that wasn’t the only time VSN’s No. 2 Attacker of the Decade scored in double digits. 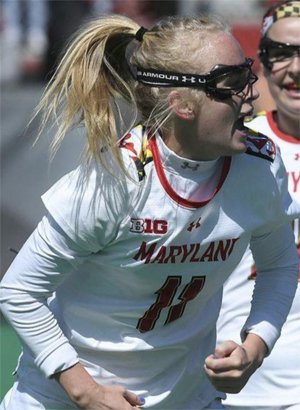 Whether pulling pranks to ease the tension during her high school days or leading Maryland to national championships in college, Severn graduate Caroline Steele has always played lacrosse with great joy.

“My very first game ever coaching at NDP, she scored 10 goals against us — and it was like 10 goals on 11 shots,” Ford said.

“She was a dynamic scorer, very accurate. She moved well with and without the ball. She was a very good dodger from behind the cage and against us she was just deadly accurate. Her senior year, the only year I coached against her, the ball moved through her. Severn had a very good team, but she made them much better.”

Steele, who went on to help Maryland to two national championships, set every Severn goal-scoring record. She finished with 239 goals and, her senior year, set the single-season record with 94, an average of 4.9 per game. She scored 82 goals as a junior.

“Being a part of an attack, that was definitely my job. I’d feel like I wasn’t doing my job if I wasn’t finishing,” she said, “but obviously, I do have to dedicate that to my coach and to my teammates. In high school, I always played so loose and just had so much fun with the people around me. That made it easy. It made it fun to continue to work hard and play hard and keep those games close. It’s hard to remember back then. I just remember all the good times and spending all that time with my friends out on the field.”

As hard as she worked on her game, Steele’s fun-loving attitude permeated everything she did. She remembers being called out by coach Renie Sotiropolous for coming to practice with a Slurpee in her hand.

“She was a goofball. She did the funniest things,” said Sotiropolous with a laugh. “The personality matched the play and she played with such joy… Don’t underestimate how that kind of joy lifts the rest of your team. Things are tense or it’s the practice before a big game and she stands behind me and ties my shoelaces together and so she helped keep me in check, because things did get tense. I’m like, ‘Oh my god, we have to win,’ and she’s like, ‘Yeah, we do, but I’m going to tie your shoelaces together.’ That was her.”

Steele still laughs about that too.

“She used to be like, ‘I can’t wait for the day when you can’t just laugh off a lacrosse game or laugh off something in your job,’ and I was like, ‘I don’t know if that day ever will come.’ She definitely had her hands full with me and a couple of my friends. There were so many good times.”

Steele polished off her high school career as the Most Valuable Player at the 2015 Under Armour All-America game after contributing a goal and four assists to her South team’s 14-12 victory. She was a two-time Baltimore Sun All-Metro first-team selection and Inside Lacrosse ranked her the No. 16 recruit in the Class of 2015.

Twice, she led the Admirals to the IAAM A Conference semifinals with both losses coming by one goal.

“Her skills and her ability to freelance was outstanding,” Sotiropoulos said. “I didn’t teach her much. All you had to do was put her in a position and then she would make the rest up on the fly. She was able to assess a defense, assess the weakness of a defender and adjust, make a move that was impossible to stop.”

Steele took up the family sport at age 4. Her mother Gretchen (Lamon) Steele played at Maryland and her four brothers — three older — all played the game. Several aunts, uncles and cousins played as well.

She jokes that she was forced into the game, but she never complained, because she loved it. She was also a standout soccer and basketball player at Severn, but those sports couldn’t compete with lacrosse.

She started every game her first three years. Although she missed four games after an injury her senior year, she returned to lead the Terps with 53 goals and to help them win their second national championship in her four years.

In the NCAA quarterfinals, her final game at Maryland’s Field Hockey and Lacrosse Complex, Steele scored a career-high seven goals in a 17-8 win over Denver. In the NCAA championship against Boston College, she scored the first two goals in a tight game and assisted on the fourth goal as the Terps built an 8-3 lead by halftime and went on to win, 12-10.

Twice, she was named to the All-Big Ten Tournament team. In 2017 after scoring four goals, including three early in the second half of a 14-6 win over Northwestern, she earned the tournament’s Most Valuable Player award.

In 2019, Steele played a few games with the Pride in the Women’s Professional Lacrosse League and in January 2020, she became an assistant coach at St. Joseph’s University in Philadelphia with two former Terps, head coach Alex Kahoe and assistant Julia Braig.

“I’ve always loved coaching,” said Steele, who has spent part of this summer scouting. “I’ve always loved being able to teach the game and I like to watch girls take what I say into consideration and if it works, it works [and] if it doesn’t, it doesn’t. This profession is definitely very rewarding. I love it.”