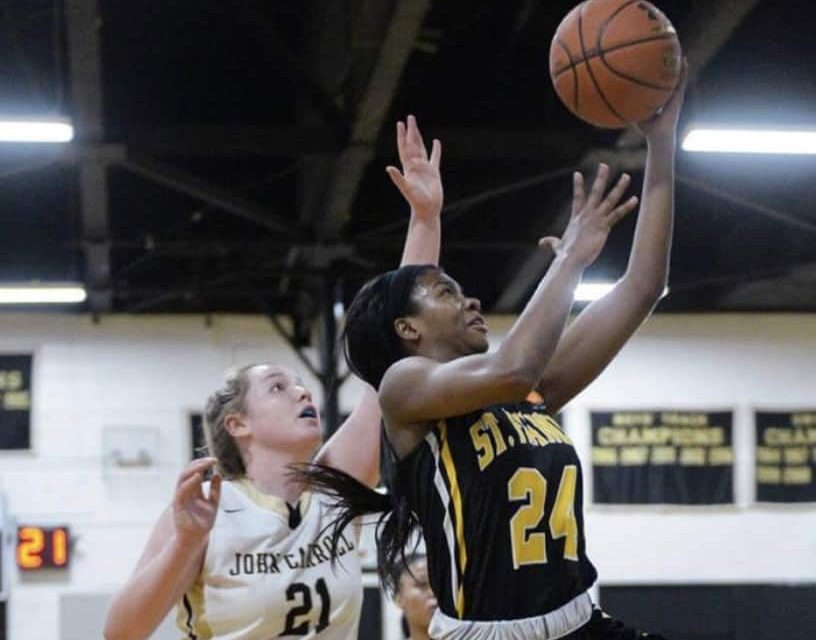 Nia Clouden rarely showed any emotion on the basketball court. A lot of games had ups and downs, but her composure at point guard assured St. Frances a chance to win every one.

And win they did. The Panthers went 100-15 during her four years with three IAAM A Conference championships and two Bishop Walsh Invitational Tournament crowns. They were undefeated in A Conference play her final three years.

Varsity Sports Network’s No. 2 Girls Basketball Guard of the Decade earned Gatorade Maryland Player of the Year honors as a junior and senior. In her junior year, the Panthers finished 30-1, played in the semifinals of the DICK’s Sporting Goods High School National Tournament and ranked No. 17 in USA Today’s Super 25.

Varsity Sports Network’s Co-Player of the Year as a senior, Clouden was a three-time Baltimore Sun first-team All-Metro selection.

The year before Clouden arrived, the Panthers finished 16-10 and went 8-5 against A Conference competition. In her freshman year, they finished 21-5 and in her sophomore year, they were 25-5 and won their first A Conference title in six years.

Certainly she had a lot of help, but Clouden ran the show.

“She controls everything. The tempo of the game is always up to her. She just dictates both ends of the court. She’s very unselfish, unflappable and smart,” then-Archbishop Spalding coach Bookie Rosemond told Gatorade Player of the Year officials in 2017.

Clouden, now a high-scoring junior point guard at Michigan State, finished her St. Frances career with 1,535 points, fourth on the Panthers’ all-time scoring list. She didn’t need to be a big scorer, but she could take over and she came up big in the biggest games.

Her senior year, she scored 23 points and nailed all five of her 3-point shots in the 69-51 A Conference championship victory over McDonogh. A few weeks later, she scored 25 points to lead the Panthers to the Bishop Walsh tournament title over Good Counsel.

But the shot Clouden is probably best known for came during her junior year in a battle between the No. 1 team in the Baltimore area and the No. 3 team in the Washington, D.C. area, National Christian Academy from Prince George’s County.

With time running out in overtime, Clouden improvised off a broken play and launched a buzzer-beating 18-footer to give the Panthers a 75-74 victory and polish off the first unbeaten regular season in program history. That brought a rare burst of on-court joy from Clouden — and it remains her favorite high school basketball memory.

Of course, three IAAM championships are right up there as well as being only the fourth girl to repeat as Gatorade Maryland Player of the Year since the award began in 1985-86.

“It was really special to win those championships especially because St. Frances has been a good program, but they had been in somewhat of a drought … and now we’re currently on a streak of championships in the IAAM, so I was really proud to be there for the start of the second streak,” said Clouden, whose Panthers have now won five straight A Conference titles.

“The accolades — it also made me really proud to win those, just being able to bring more notoriety to St. Frances and the Baltimore area, because PG and DC, they get most of the acknowledgement when it comes to basketball, so I was just glad to be able to put on for the city.”

Clouden first honed the skills and poise that would take her to Michigan State against the boys in her Owings Mills neighborhood where she had the only driveway hoop. Known as a coachable and humble AAU player, she wasn’t afraid to try new things even at a young age.

She grew into a more vocal leader as an upperclassman at St. Frances, where she continued to develop the mental aspects of being a point guard.

“Nia had a tremendous work ethic [and was an] ultra competitor, great teammate and very coachable. I think that’s pretty representative of what’s happening at Michigan State right now,” St. Frances coach Jerome Shelton said. “She’s set herself apart as one of the premier guards in the country right now.”

She leads Michigan State in scoring (19.2 points), steals (29) and assists (64). She ranks fifth in scoring, tenth in steals and tied for tenth in assists in the Big Ten.

Clouden, who started as a freshman and also led the Spartans in scoring and assists as a sophomore, said playing for St. Frances prepared her for Big Ten basketball.

“Coach Shelton and all the coaches run their program similar to a college program,” she said. “We play a really good schedule. We travel and we play a lot of games and we play good competition. And then I had a lot of really good teammates over the years — Mia Davis, Angel (Reese), Tyeisha Smith — so when I got [to Michigan State] I knew how to translate, because some people who haven’t played with such good teammates in high school, when they get here, it’s just a shock that everybody else is just as good. I was prepared for that.”

Clouden, who earned a 3.5 GPA at St. Frances, will graduate from Michigan State with a degree in advertising management this spring, a year early, and plans to start on a master’s degree in the fall.

One day, she’d like to start her own business, but, she said, that wouldn’t end her basketball career. She aims to play in the WNBA and run her business at the same time, a commitment for which she is preparing after finishing her degree in three years while playing Division I basketball.