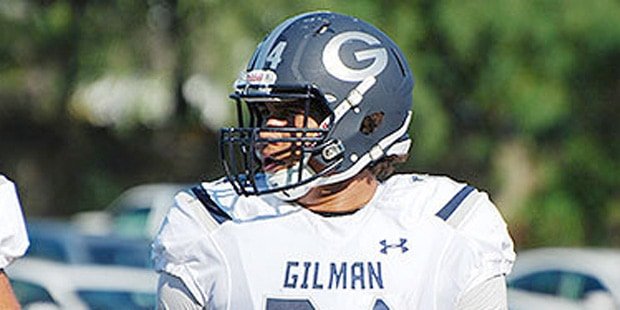 Having arrived in the U.S. from his native Germany without any knowledge of football, you could say that Devery Hamilton picked up the sport quickly.

Considering how accomplished the 2016 Gilman School alumnus has become in the trenches as an agile and aggressive offensive lineman for two Power Five Conference programs at Stanford and Duke universities, he may even be entertaining the idea of playing in the NFL some day. 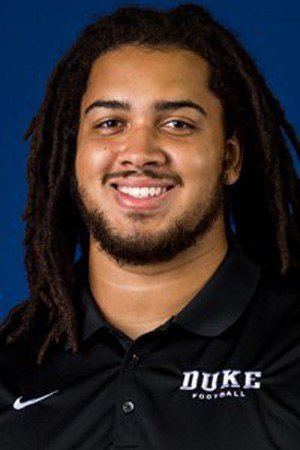 Devery Hamilton is finishing up his college football career as a red-shirt senior at Duke.

That said, he already has the academic bona fides — communications and philosophy degrees from Stanford while currently enrolled in a master’s in management studies program from Duke’s prestigious Fuqua School of Business — to become as big of a titan in the boardroom as he has been on the gridiron.

Even so, the way he has developed his football prowess was probably not what he expected after moving to America as a 10-year-old with a large frame and plenty of athletic ability.

By the time the 6-foot-7, 295-pound tackle finished a highly decorated high school career, Hamilton was courted by many top-notch collegiate programs. He opened holes for Antonio Dupree and a stable of other quality backs at Gilman, for a unit that compiled 4,350 yards of total offense, 2,995 rushing yards and 48 touchdowns in his senior year.

The 2015 All-State performer was rated a four-star prospect by Scout.com (10th best offensive tackle), Rivals.com (24th) and 247Sports.com (22nd). He originally committed to the University of Michigan before flipping the script and choosing to travel to Palo Alto for four years playing for the Cardinal in the Pac 12 Conference.

“Devery was an anchor and a finisher,” Davis said. “He personified Gilman linemen during the decade — big, strong, physical and technically proficient.”

Tim Holley, a former assistant football coach at Gilman, before being the head coach for two years, said that Hamilton had everything coaches covet, from smarts to size.

“Devery had the innate physical stature to be a great football player,” Holley said. “And he also had great athletic talent. I mean, he played basketball for us and was pretty good — and could have played at the Division III level. If he were 5 or 6 inches shorter and lighter, he could have played a skill position (in football). He was just so nimble on his feet with great balance — and that made him a great player.”

Holley added that Hamilton was very productive in his final game for the Greyhounds, which happened to be the 100th game against archival McDonogh.

“He really stood out that day,” Holley said about the 35-28 Gilman triumph.

Hamilton also picked the centennial battle with the Eagles as a personal favorite.

“It was a great atmosphere, we had a lot of fans out there, (we had) super cool uniforms — and we won,” Hamilton said during a bye week before the Blue Devils hosted the University of North Carolina at Charlotte on Halloween. “Honestly, that was the best time I had at Gilman.”

At Stanford, the Cardinal went 32-20 with three bowl game appearances and a pair of Associated Press top-20 finishes during Hamilton’s tenure, in which he saw action in 27 games and started 10. He also made the Pac-12 All-Academic Second Team twice.

His most productive year in the college ranks might have been in 2018 while protecting Cardinal quarterback K.J. Costello, who is second all-time in program history for passing yards in a single season.

However, after suffering an injury in a 21-6 loss to the University of Oregon that forced him to miss the rest of his senior year at Stanford, he submitted his name to the transfer portal last December.

The process of moving from Palo Alto to Durham in the midst of uncertainty caused by the coronavirus pandemic and starting over in a new football program has had its challenges, Hamilton said.

“I would definitely say the experience was a little tough at first,” he said. “Being the new guy, and not being able to hang out with a lot of people, with social distancing. But the guys have really welcomed me, especially once I got to training camp and got the hang of things. So happy I’m here and I’m really enjoying what I’m doing. I’m enjoying the coaching and the time I do get to be with my teammates. It’s just been great overall.”