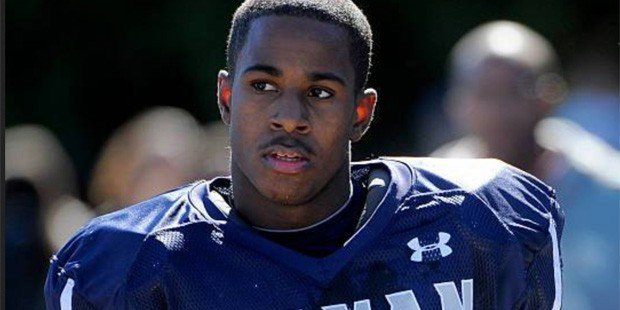 To be considered among VSN’s 10 Years of Excellence nominees, candidates had to play in the decade that began in 2010 and ended in 2019.

From that perspective, Darius Jennings barely qualified for the honor after playing only one season during that span. 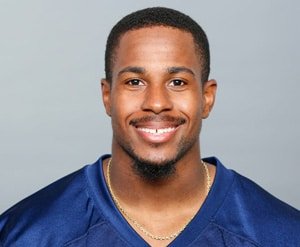 After a brilliant college career at the University of Virginia, Darius Jennings reached the NFL as an undrafted free agent with the Cleveland Browns in 2015. He played for four different teams with his best season coming in 2018 with the Tennessee Titans.

Considering that he is selected as the No. 2 VSN Football Athlete of the Decade shows just how far above the competition the Gilman School star was in his senior campaign.

Reed-thin for a player who touched the ball often as a 175-pound spread-option/wildcat quarterback, who rushed for 1,569 yards and 19 touchdowns as a senior, Jennings came to be revered by his coaches for his endurance and excellence on the field.

He was described as “tough as nails,” by then-Gilman coach Biff Poggi, who added that the future University of Virginia standout “looks more like a cross country guy.”

Although the Greyhounds were runners-up to 2010 Maryland Interscholastic Athletic Association A Conference champion Calvert Hall College High School in the final state and VSN 2010 rankings, Jennings was impressive enough to be chosen as the inaugural VSN Offensive Player of the Year, All-State Quarterback and Gatorade Maryland Football Player of the Year.

“I knew it was going to be tough to repeat from the numbers that I put up last year,” Jennings said to VSN in 2010. “You just have to play as hard as you can and I hope for the best.”

His final campaign with Gilman got off on a spectacular note when returned the opening kickoff of the season, against Archbishop Spalding High School, 88 yards for a touchdown and continued in that same vein against a more formidable opponent — reigning Washington Catholic Athletic Conference champion Our Lady of Good Counsel High School.

All Jennings did in the I-95 Kickoff Classic battle was to rush for 144 yards on 25 carries and add a 28-yard scoring pass to Cyrus Jones in leading the Greyhounds to a surprisingly lopsided 28-7 triumph, handing the Falcons their only defeat other than to rival DeMatha Catholic in 13 years,

There were more heroics to come, only they came against the aforementioned Stags when he rushed for 276 yards and two touchdowns in a convincing 34-7 verdict.

“He’s by far the best player in the state, I can’t imagine anybody better,” then DeMatha coach Bill McGregor told VSN after the rout. “You look at him, he’s nothing but skin and bones, but he’s tough as they come.”

He was also spectacular in defeat, producing TD runs of 46 and 65 yards to give the ‘Hounds an early 14-0 lead against Calvert Hall in an eventual 26-21 setback. He rushed for 200 yards on 28 carries in the pivotal contest that all but sewed up the Cardinals’ conference crown.

Jennings still almost managed to bring his team back after it fell behind for the first time in the game with 26 seconds remaining in regulation, although his final pass into the end zone fell to the turf as time expired.

“We got close,” Jennings said. “But we just couldn’t pull it off.”

His high school career ended with a flourish, though, when he ran for 185 yards and a pair of touchdowns in a 42-6 win over McDonogh School in the arch-rivals’ annual showdown, giving him 4,338 career rushing yards on 493 carries (8.8 per carry) and 53 touchdowns.

“The last game against McDonogh was my favorite game,” Jennings said. “We won and I left the field to a standing ovation.”

Poggi admired Jennings for his toughness and tenacity while being the focal point of the offense.

“You’re going to carry the ball 25-30 times a game,” Poggi said. “He [Jennings] didn’t miss a snap in four years and he took some punishment.”

While Poggi was unwilling to compare Jennings and Wooden directly, he praised Jennings’ Gilman legacy.

“I really believe in all my heart as good as a player he is, and he’s a great player, he’s a better person,” Poggi told VSN in 2010. “Being around him has been a positive for every kid in our program, all of our coaches and our school.”

“He demanded a lot from us,” Jennings said about Poggi. “The sophomores led the freshmen, the juniors led the sophomores and the seniors lead the whole team. You had to be accountable — on and off the field.”

“I remember in his freshman year he had a great game against us,” Davis said. “He was one of the five-best overall players ever in our league.”

At Virginia, Jennings became versatile and valuable as a kick returner and wideout, with a 53-yard TD reception against the University of Miami being a highlight in his freshman year before catching four passes against Auburn University in the Chick-fil-A Bowl to give him 20 grabs for 238 yards that season. He also led team with 599 kickoff return yards.

A year later, he led the Cavaliers with 568 receiving yards and five TD receptions, including seven catches for 57 yards and two TDs against Miami.

As a junior, Jennings had a career-best 13 catches for 119 yards and two TDs against Georgia Tech while eclipsing the 1,000-yard career receiving mark and leading UVA with 24 kick returns for a team-high 522 return yards.

In his final campaign in Charlottesville, Jennings paced the Atlantic Coast Conference with a 27.1-yards-per-kick average. He also chipped in 27 catches for 521 yards and two touchdowns, carried the ball 24 times for 115 yards and one touchdown and led UVA with 1,313 all-purpose yards.

As an undrafted free agent, he played four games in the National Football League for the Cleveland Browns in 2015 before being a member of the practice squads for the New York Jets, Chicago Bears and Tennessee Titans in 2016 and 2017.

He rewarded the Titans for elevating him to the active roster when he returned a kickoff 94 yards for a touchdown in the fourth quarter in the first game of the 2018 season in a 27-20 loss to the Miami Dolphins. He led the league that year with 31.7 average on kick returns on a career-topping 698 yards.

Jennings played the following season as well for Tennessee, but signed to play in 2020 for the Los Angeles Chargers before being cut in early September.

Back in Baltimore and working out at the Training House Gym, he puts in between 16-20 hours per week staying in shape in case he gets the call from another NFL team.

Jones, who is also working out in hopes of being picked up by another NFL squad while recovering from heart surgery, said that he has great admiration for Jennings.

“He’s my brother for life,” Jones said. “He’s the kind of guy who could put on a show without being flashy. And he was a great team leader. He was always supportive of me, and took me under his wing when I got to Gilman.”