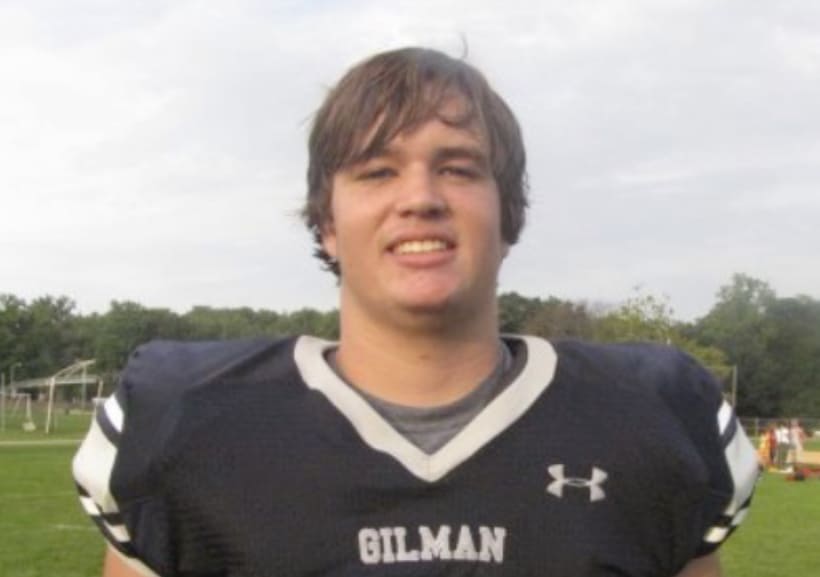 When he decided to attend Gilman School, Henry Poggi knew his teammates would look at him differently since father, Biff, was the Greyhounds coach.

The youngest of three sons to play for the former longtime sideline leader, Henry, proved his worth. Poggi is VSN’s No. 2 Defensive Linemen of the Decade.

Henry Poggi was the Consensus All-State Defensive Player of the Year in 2012 for Gilman. Poggi helped the Greyhounds to three MIAA A Conference championships.

A four-year starter, Poggi was part of three MIAA A Conference championship teams (2009, 2011 and 2012). He was the Consensus All-State Defensive Player of the Year in 2012, the first local player to receive the honor since Victor Abiamiri in 2002.

Abiamiri, one of several defensive linemen standouts produced by the Roland Park School, went on to play at the University of Notre Dame. He played five seasons in the NFL for the Philadelphia Eagles.

Henry was the last of Biff Poggi’s boys (Sam and Jim) to play for him at Gilman, where he won 13 MIAA A championships in 19 seasons. Biff is now co-coach at St. Frances Academy.

Henry didn’t get much stack from his father on the football field.

“We’d be having a bad practice, and instead of yelling at our team, he’s just kind of yell at me,” he said.

“When I wanted to send a message to the team I didn’t want to necessarily really go hard at the team so I go hard at them in front of the team and the team got the message,” said Biff. “There are benefits having your dad as a coach, but there’s negatives.”

Athletic at 6-foot-4 and 255 pounds, Henry Poggi was dominant at defensive end and nightmare for opposing defenders at tight end. He had 49 tackles (11 for loss) and 10 quarterbacks in his junior season, earning first-team All-Metro and consensus All-State honors.

Despite attracting double teams, Poggi was overwhelming his senior campaign. He totaled 87 tackles (31 for loss), 14.5 sacks and three forced fumbles as the Greyhounds repeated as MIAA A champs, capped with a 35-7 rout of Calvert Hall College in the final.

“Physically, he was the most gifted,” said his father, comparing his sons. “The other two were good players, but he was a great player. He really worked on his craft and became a polished pass rusher.”

A four-star recruit by Rivals, Henry played in the Under Armour All-American Game and shared All-Metro player of the year honors with current Los Angeles Rams linebacker Micah Kiser, VSN’s No. 1 Linebacker of the Decade. He selected to the USA Today All-American first team (first local player since Abiamiri).

After attracting dozens of scholarship offers, Poggi selected Michigan over Alabama and Tennessee. He appeared in 44 contests and started 17 for the Big 10 Conference school.

Recruited as a defensive tackle by then-Wolverine coach Brady Hoke, Poggi played tight end and fullback his final three seasons for Jim Harbaugh, who led the NFL’s San Francisco 49ers to a Super Bowl and turned Stanford University into a Top 20 program.

“Pretty much whatever he says, I think he knows a little bit more about football than me,” said Henry.

“I said ‘coach I’m just a high school coach, you’re the coach of that team,’” Biff recalled during a conversation with Harbaugh.dd “He’ll do whatever you tell him to do and you won’t hear nothing from him or me.”

Poggi finished with nine receptions for 68 yards and two carries for six yards on offense. His biggest highlight came in his senior season, scoring his only career touchdown in a 35-10 victory at Maryland .

His father got an opportunity to watch Henry as an a special assistant to Harbaugh in 2016.

“He was well respected,” said Biff Poggi, who kept “distance” from his son. “He never really cared about being a high recruit.”

Recruited for defense, Poggi played fullback and tight end his final three seasons at the University of Michigan.

Henry Poggi reached NFL camps with the Oakland Raiders and New England Patriots as an undrafted free agent, but didn’t make the final roster. He returned to Michigan as a volunteer assistant in 2018, then moved to New York to start working in the financial industry.

Another football opportunity came along for Poggi in 2020, this time in Italy with the Ancona Dolphins. But the coronavirus pandemic hit in March, and Poggi, one of three Americans allowed to play for Ancona, returned to the states after a couple of months.

Poggi, who works for Baltimore-based salad dressing maker Tessemae’s, said he’s done with football. He would like to follow his dad into coaching.

“I think would he want to do that if the opportunity presented itself,” said Biff Poggi. “He was successfully able to put the game behind him with a full heart and that’s rare.”