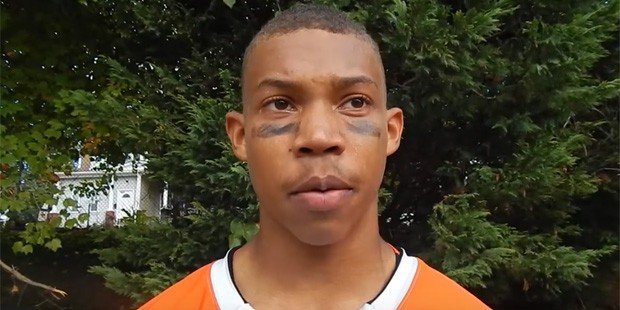 From McDonogh School to the University of Maryland to the Chicago Bears, Woods, VSN’s No. 2 Defensive Back of the Decade, has been a late bloomer.

A sensational senior season at McDonogh elevated Josh Woods from a potential Division III player to a scholarship athlete at the University of Maryland.

After missing most of the 2012 season with a broken shoulder, Woods thought Division III would be his best option for playing in college going into his senior campaign.

The 2013 season was historic for McDonogh, and Woods led the charge. He had 35 tackles and four interceptions at corner back, and, on offense produced 800 yards receiving and 10 touchdowns.

The Owings Mills school finished 11-0, won the MIAA A Conference championship and was the area’s consensus top-ranked team. In the Eagles’ title clinching 37-6 victory over Gilman School, Woods caught a touchdown pass, intercepted a pass, and had second interception called back for pass interference.

“He’s developed, especially in the last part of his senior season, into an explosive athlete with the rare ability to play the ball and catch the ball,” said former McDonogh coach Dom Damico. ”His ball skills are really off the charts, with those skills, he can play either receiver or defensive back at the next level.”

“Coming from last year with the broken shoulder and 13 weeks ago thinking about playing D-3 football to this is amazing,” said Woods. “I can’t even tell you how it happened.”

Woods, who capped his meteoric final high school season with a pick-six in Team Maryland’s epic overtime victory over Pennsylvania in the Big 33 Classic at Hershey Park, played special teams his first two seasons for Maryland. He moved into the Terps’ defensive backfield, starting five games at safety as a junior in 2016.

“Once you buy in off the field, it kind of just all falls into place on the field,” Woods said.

He caught the eyes of the Chicago Bears, who invited him to their rookie mini-camp. But the NFL organization wanted Woods to convert to linebacker.

A defensive back in high school and college, Josh Woods is now a linebacker and special teams performer for the Chicago Bears. Woods starred at the University of Maryland and McDonogh School.

Woods, roughly 205 pounds in his senior season at Maryland, packed on 30 pounds. He advanced to the Bears’ preseason camp, but was cut. Woods was signed to the practice squad.

More comfortable in his new position, Woods shined in the 2019 preseason with a team-best 22 tackles.

“I was like, ‘Huh. All right,’” said Woods, who found out during a team meeting before the final cut deadline. “So I just waited for a break to call my mom and let her know, because she’d been asking, ‘Get a call yet? Get a call yet?’ I could finally tell her.”

Woods, a reserve linebacker and special teams performer, has eight tackles in 13 games this season for Chicago after recording five tackles in nine games in 2019.

Once unsure of his football prospects as a McDonogh senior, Woods is appreciative of his status.

“I’m just happy to still be here, honestly, and be blessed enough to keep playing this game,” said Woods.