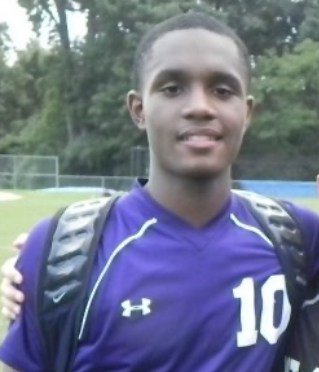 From national youth teams to MLS, Jalen Robinson has been on American soccer’s biggest stages. But the former Mount St. Joseph star still doesn’t know exactly how he got into the sport.

“If you ask my mom, she’ll say my dad and if you ask my dad, he’ll say my mom,” laughed Robinson, “When I was a kid I wanted to play football but I was too small and one of them put me in soccer.”

Robinson found his niche and became one of the area’s best in recent memory. He’s VSN’s No. 2 Boys Soccer Midfielder of the Decade.

A four-year starter, Robinson helped the Gaels to the 2009 MIAA A Conference championship. He was selected first-team All-Metro his final three seasons.

In the MIAA A, annually stocked with elite players, Robinson was arguably the most gifted.

“When you saw him, you said to yourself he’s a pro,” said Loyola University men’s soccer coach Steve Nichols, who coached against Robinson at McDonogh School.

Though he mainly played in the back, Robinson logged minutes in the midfield for the Baltimore City private school.

“You have to be willing to do what’s best for the team,” said Robinson. “I tried my hardest wherever I played.”

Robinson was in the midfield when he scored the game-tying goal in the final minute of regulation against Calvert Hall in the 2009 MIAA A semifinals. The Gaels won in penalty kicks and went on to defeat McDonogh School for their first championship since 2005.

“That whole run was destiny,” said Robinson, remembering the Calvert Hall fans gathering in the final minutes of regulation to storm the field and former teammate Dave Arnold, a starting forward, having to play goalie and make several saves in PKs. “We were so focused.”

An elite defender, Robinson was a member of D.C. United’s academy and played on the 18- and 15-under national teams. He drew serious interest from several European professional club teams after performing with under-18 national team in Ireland before his senior year at Mount St. Joseph.

“I just never thought about that [becoming a professional], let’s beat Gilman, Calvert Hall, Loyola…I wanted to be right there in the moment,” said Robinson.

Robinson, one of three siblings, said his parents “were focused on education and sports was a reward.” He earned a scholarship to Wake Forest University where he was named to the Atlantic Coast Conference’s All-Freshman team and earned Freshman All-America honors from Top Drawer Soccer and College Soccer News.

After his sophomore season, Robinson signed with D.C. United as a Homegrown player (joined team directly without going through Major League Soccer’s SuperDraft). He made his professional debut on June 19, 2016.

Robinson’s contract with D.C. United ended after the 2019 season. He earned a Bachelors in Economics from UMBC, keeping a promise to his parents.

“You’ll live a long life as an adult and sports isn’t end all be all,” said Robinson. “You need something to fall back on.”

“It’s always about giving back. I just want to help, big or small,” said Robinson, whose older brother, Renard, starred for the Gaels’ football team. “It’s who I’ve become as a person.”