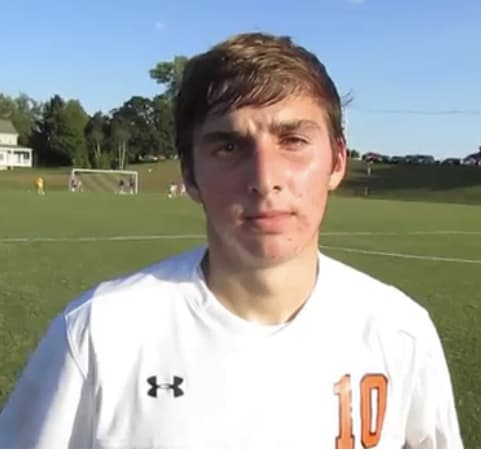 Connor Smith said his father often likes talking about Connor’s accomplishments when he was at McDonogh School.

“I jokingly tell him to shut up,” said Smith. “It’s nice people thought that highly of you but I’d rather win championships than individual accolades.”

Smith had one of the most decorated careers for an area’s boys soccer player. Smith is VSN’s No. 2 Boys Soccer Forward of the Decade.

Smith finished with 23 goals and 21 assists for the Eagles, who lost to Loyola Blakefield in the MIAA A Conference title game. He totaled 46 goals and 31 assists in four years at McDonogh.

“He’s probably the smoothest young soccer player I’ve been around,” said McDonogh coach Brandon Quaranta. “He could pick a pass anywhere on the field…. great combination of play-maker and scorer.”

As a freshman, Smith, who played club for Baltimore Celtic, said he had to adjust to a reserve role. Practicing against the likes of older players like Malcolm Harris (UMBC) and Mike Gamble (2011 VSN Player of the Year; Wake Forest) was a dissertation.

His arrival coincided with the start of USA Soccer’s Development Academy program which offered year-round tutelage for elite players interested in competing at the national level. It prohibited players from playing for their high school teams.

“It wasn’t that hard of a decision for me,” said Smith. “I knew the competition was going to be high (in MIAA A).”

After winning national player of the year honors as a senior at McDonogh in 2014, Connor Smith went on to the University of Maryland. He was part of the Terps’ 2018 national championship team.

After helping McDonogh to a 70-7-3 mark and two MIAA A championships (mythical national champs in 2013), Smith, the 2014 All-Metro Player of the Year, matriculated to the University of Maryland. He participated in 15 games over his freshman and sophomore seasons for the Terps.

On his way to a practice in his junior season, Smith started feeling dizzy. He was diagnosed with Vertigo and didn’t play the 2017 season.

Smith recovered, but after not playing in nearly a year, he didn’t believed he could get into playing shape. Smith remained on scholarship with Terps and contributed behind the scenes.

Maryland won the Division I national championship in 2018.

“I never knew how much went into running a Division I program,” said Smith. “It was a pivotal thing.”

Though his college career wasn’t as decorated, Smith cherished his time in College Park.

“I had a fantastic time. I couldn’t imagine a better atmosphere or culture,” said Smith, who now works in insurance. “I wanted to play but you can’t help things that happen.

“It was the best day of my life (winning a national championship). I felt like I had a role, whether it was doing something on the field or off.”