10 YEARS OF EXCELLENCE: VSN’S NO. 2 BOYS LACROSSE DEFENSIVE PLAYER OF THE DECADE 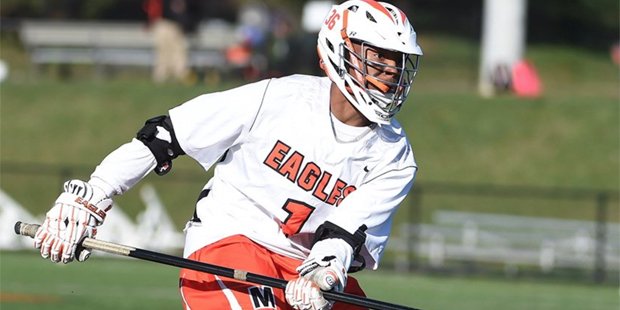 by Nelson Coffin
The full scope of what BJ Farrare brought to the defense in a phenomenal four-year career at McDonogh School can only be described as wide ranging and devastatingly effective.

After a sensational freshman year at Penn, BJ Ferrare and the Quakers have played just six games over the last two seasons because of COVID-19 restrictions. He is hoping a big senior season this spring.

In direct terms, McDonogh coach Andy Hilgartner described Farrare as a “game changer and the most impactful player I’ve ever had. He was incredibly fast and had the ability to turn a ground ball into offense very quickly. He just created so many things in transition for us.”
With that in mind, it’s easy to explain why the Eagles earned a 62-15 record during Farrare’s tenure in Owings Mills.
Farrare, whose combination of speed and strength make him a dangerous weapon anywhere on the field, played every defensive position as the situation dictated for the Eagles, starting at close defense as a freshman before developing into a lethal long-stick midfielder the following two springs.
Farrare was special from the get-go and continued on that same trajectory throughout his career, according to Hilgartner.
“From covering Pat Spencer (former Boys’ Latin/Loyola University star and 2019 Tewaaraton Award winner) and holding him to an assist as a freshman, to playing long-stick against any of the great middies in the league, to playing defensive middie — he’s been there to help our team in every way,” the coach said.
Hilgartner said that he needed Farrare to man all three defensive positions in his senior year — short-stick, LSM and close defense — and VSN’s No. 2 Boys Lacrosse Defensive Player of the Decade mastered them all while scooping up 47 ground balls, scoring two goals and adding fours assists.
With Farrare taking charge on the backline, McDonogh allowed an average of just six goals per game in 2018.
The Eagles gave up one more goal than that, yet dispatched Loyola Blakefield, 12-7, in early May to take over first place in the A Conference before eventually bowing to Boys’ Latin in a playoff semifinal.
“We talked about coming out hot on defense, ready to slide and go at all times,” Farrare told VSN after the victory over the Dons on Senior Day. “We needed to compete harder and not be satisfied.”
His job was to fill a variety of defensive roles — at an extremely high level.
“I decided to help the best way I could to become more versatile and to help wherever I was needed,” he said in a VSN video interview to complement his selection as VSN’s 2018 Defensive Player of the Year.
No wonder that Farrare was also the 2018 C. Markland Kelly Award winner for Baltimore-area private schools and a three-time member of the Baltimore Sun’s All-Metro first team, who displayed his offensive chops by scoring a goal and adding two assists for the South All-Stars in a 22-15 win over the North All-Stars in the prestigious Under Armor Armor All-America game.
As a youth player, he said that he actually contemplated playing offense.
“I was an offensive middie for a while when I played for Looney’s (club) and Kelly Post (Towson Rec),” Farrare said. “I was more of an offensive player than a defensive player. I decided to make the switch when I went to try out for the Crabs (club) in seventh grade. I felt that playing defense would have been my best chance at making the team. So, from there on I have been playing defense/LSM.”
His biggest moment with the Eagles, though, came two years earlier in the 2016 MIAA A Conference championship game when he scarfed up five ground balls and added four caused turnovers in an 8-5 triumph over Boys’ Latin.
“There is nothing that will compare to winning that championship in 2016,” he said. “It was just a great group of guys who competed and had fun together. We had tremendous leadership within the senior class that year and that really pushed us to where we wanted to go. There was a selfless attitude on that team that I will never forget and continue to carry on through my college career.”
His collegiate career at the University of Pennsylvania also started like gangbusters.
As a freshman at the Ivy League school, the 5-foot-9, 170-pound speedster was a CollegeCrosse.com All-Freshman selection after totaling three goals, a whopping six assists, 37 ground balls and 18 caused turnovers while performing in all 16 games for the Quakers.
He was also named to the Ivy League All-Tournament team after producing an assist, causing a pair of turnovers and picking up three ground balls against Brown University and adding another helper, two caused turnovers and two ground balls against Yale University.
Like every other athlete in the league, opportunities to compete have been severely restricted by the pandemic.
Penn has just played six games since the conclusion of his rookie year, so he still has a chance to to excel for at least one more season in the spring of 2022.
No. 3 Defender: BJ Burlace, 2019, St. Mary’s
No. 1 Attackman: Shack Stanwick, 2014, Boys’ Latin
No. 2 Attackman: Jacob Kelly, 2018, Calvert Hall
No. 3 Attackman: Jackson Morrill, 2016, McDonogh
No. 4 Attackman: Patrick Kelly, 2012, Calvert Hall